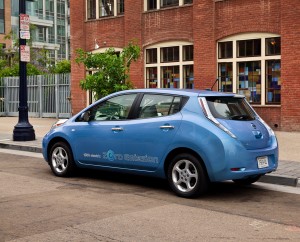 Despite millions of dollars of advertising and hundreds of news stories and reviews, a majority of consumers still do not know who builds the Leaf and Volt electric cars.

According to Lindsay Chappell?of Automotive News, a recent independent market research study indicated that nearly 70 percent of the shoppers had no idea that the Leaf was a Nissan, and about 55 percent of those in a market for an electric car did not know that the Volt was a Chevrolet.

Of the study respondents, just over 17 percent said they knew the Leaf was a Nissan and another 13 percent identified it as a product of another manufacturer.

Both Nissan and Chevrolet have said they expect to win new customers to their respective brands by the halo effect of the electric cars, but apparently electric car awareness has some lag time before that happens.

Jon Brancheau, Nissan vice president of marketing for Nissan told Chappell, “We’ve learned that most consumers shopping for an all-electric vehicle are new to the Nissan brand. This presents a tremendous opportunity to Nissan as we introduce new consumers to our lineup.”

GM spokesman Rob Peterson told her most of the early marketing work on the Volt tried to build general credibility for electric vehicles. Now the focus is associating the vehicle more closely with the brand. For example, GM has 600 demo vehicles at Chevy dealerships.

“These are supposed to be halo products,” says Lincoln Merrihew, managing director for transportation at the market research firm Compete Inc. in Boston, which conducted the study. “But the brands aren’t getting the benefit of the halo. The halo of the Leaf isn’t reflecting on Nissan.”

Merrihew went on to say that brand awareness will improve in the months ahead. Currently both products are still scarce around the country. ?Both brands still have limited availability and are each only offered in seven states at this time.