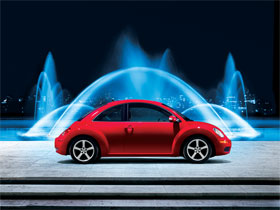 Volkswagen of America, Inc. announced today a nationwide contest calling on soccer “fanaticos” to express their passion for the game for a chance to win an appearance in a national TV spot during the World Cup.? As a long time global supporter of soccer and sponsor of Univision’s broadcast of the World Cup, Volkswagen, together with soccer legends “Ramoncito” Morales, former captain of Chivas de Guadalajara and Ramon Ramirez, one of the best players in the history of Mexican soccer, are encouraging soccer fans to create and upload their own “fanistitial” videos documenting their passion for soccer.?? Beginning today, consumers can upload videos to the Volkswagen Facebook fan page at www.facebook.com/vw, where several lucky winners will be chosen to appear on a prime-time Volkswagen television commercial to air on Univision during the World Cup.

“With its immense popularity among various cultures, the World Cup provides the ultimate global stage to further engage our customers, expand our reach, and support our aggressive growth strategy,” said Tim Ellis, Vice President of Marketing, Volkswagen of America, Inc.? “The passion fans have for soccer is unparalleled, and this gives us a unique opportunity to reward them for their support.”

In addition to the user generated ad, Volkswagen will air a series of vignettes and three :30 television commercials during the World Cup, each also aiming to increase familiarity and consideration for the Volkswagen brand and its breadth of models.? One of the spots, titled “Flags,” will feature fans driving different Volkswagen models while prominently displaying each of their nations’ flags with pride.? Each spot communicates the various types of fans in the world and that there is a different Volkswagen model for each of them.? Volkswagen will also have a significant bilingual digital presence on Facebook, Yahoo en Espanol and MSN Latino, as well as grassroots efforts at dealerships, MLS games and community soccer tournaments throughout the U.S.

Globally, Volkswagen has been a long time supporter of soccer.? The brand is the title sponsor of Volkswagen arena in Wolfsburg and owns the VFL Wolfsburg football club at its global headquarters.? Volkswagen of America is the official automotive partner of Major League Soccer (www.mlsnet.com) and is a title sponsor of D.C. United.? The brand will also continue its grassroots soccer tour, with a 19-city mobile marketing tour showcasing Volkswagen’s product family at local youth soccer tournaments.