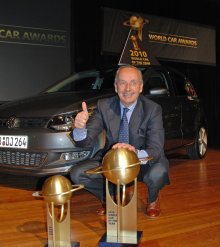 World Car jurors from 25 counties awarded the Volkswagen BlueMotion models the coveted Green Car of the Year Award at the New York International Auto Show. ?The 59-member jury picked the BlueMotion system over two other finalists: the Honda Insight and Toyota Prius.

Jurors felt that, “It is not necessary to add an electric motor and a heavy battery pack to achieve class-leading efficiency. Based on Volkswagen’s common-rail diesel engines, the BlueMotion models are among the most fuel-efficient vehicles on the market. In fact, the Passat BlueMotion can travel just about 1,000 miles on one tank of fuel in the European cycle. As far as internal combustion engines go today, these models are the ultimate you can get.”

“BlueMotion is one of the most successful efficiency brands worldwide. ?It stands for tremendous competence in efficient and economical drive trains at Volkswagen,” said Prof. Dr. Martin Winterkorn, Chairman of the Board of Management of Volkswagen AG, delighted about the appreciation by the jury.

The award was received at the New York International Auto Show by Walter de’Silva, head of design for Volkswagen Group.

As part of the annual World Car awards, World Green Car has become one of the world’s most prestigious, credible and significant programs of its kind. Due to the complexity of some of the ‘green’ technologies, three green experts were appointed by the World Car Steering Committee to extensively review all documentation and specs associated with each candidate.