This fall Volvo will start real-world tests of a new flywheel technology that makes a four-cylinder engine feel like a six-cylinder, while simultaneously cutting fuel consumption by up to 20 percent.

The Volvo Kinetic Energy Recovery System is fitted to the rear axle and starts to spin up to 60,000 rpms during braking.? At the same time, the combustion engine that drives the front wheels is switched off. ?When the car starts moving again, the flywheel’s rotation is transferred to the rear wheels via a specially designed transmission. 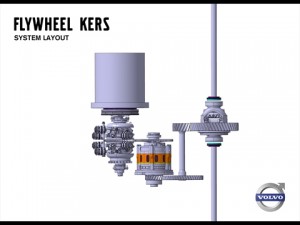 The energy in the flywheel can be used to accelerate the vehicle when it?s time to move again, or to power the vehicle once it reaches cruising speed. ?Since the flywheel is activated by braking and the duration of the energy storage time is limited, the technology is most effective during stop and go driving.

This autumn, Volvo Car Corporation will be one of the world’s first car makers to test the potential of flywheel technology on public roads. The company has received a $1.06 million grant from the Swedish Energy Agency for developing next-generation technology for kinetic recovery of braking energy in a joint project together with Volvo Powertrain and SKF. 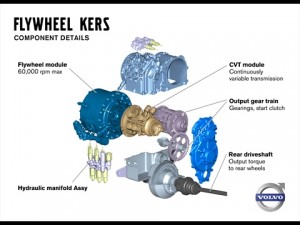 “Our aim is to develop a complete system for kinetic energy recovery. Tests in a Volvo car will get under way in the second half of 2011. This technology has the potential for reducing fuel consumption by up to 20 percent. What is more, it gives the driver an extra horsepower boost, giving a four-cylinder engine acceleration like a six-cylinder unit,” relates Derek Crabb, Vice President VCC Powertrain Engineering.

“The flywheel’s stored energy is sufficient to power the car for short periods. However, this has a major impact on fuel consumption. Our calculations indicate that the combustion engine will be able to be turned off about half the time when driving according to the official New European Driving Cycle,” explains Crabb.

If the energy in the flywheel is combined with the combustion engine’s full capacity, it will give the car an extra boost of 80 horsepower, and thanks to the swift torque build-up this translates into rapid acceleration, cutting 0 to 60 mph figures significantly.

Flywheel propulsion assistance was tested in a Volvo 240 already back in the 1980s, and flywheels made of steel have been evaluated by various manufacturers in recent times. However, since a unit made of steel is large and heavy and has rather limited rotational capacity, this is not a viable alternative. 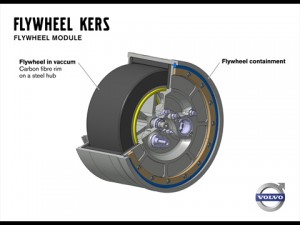 The flywheel that Volvo Car Corporation will use in its test car is made of carbon fiber. It weighs about 13 pounds and has a diameter of just under eight inches The carbon fiber wheel spins in a vacuum to minimize frictional losses.

“We are not the first manufacturer to test flywheel technology. But nobody else has applied it to the rear axle of a car fitted with a combustion engine driving the front wheels. If the tests and technical development go as planned, we expect cars with flywheel technology to reach the showrooms within a few years,” says Crabb. He concludes: “The flywheel technology is relatively cheap. It can be used in a much larger volume of our cars than top-of-the-line technology such as the plug-in hybrid. This means that it has potential to play a major role in our CO2-cutting DRIVe Towards Zero strategy.”