A European Program that Could End up on U.S. Freeways 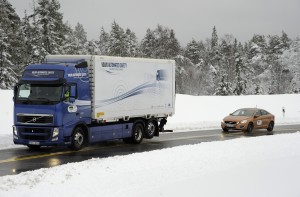 It?s called SARTRE or Safe Road Trains for the Environment and it involves grouping cars into virtual road trains.

Vehicle platooning, as envisaged by the SARTRE project, is a convoy of vehicles where a professional driver in a lead vehicle drives a line of other vehicles. ?Each car measures the distance, speed and direction and adjusts to the car in front. All vehicles are totally detached and can leave the procession at any time. ?But once in the platoon, drivers can relax and do other things while the platoon proceeds towards its long haul destination. 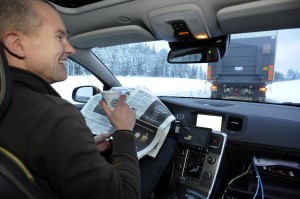 Platooning may be the new way of travelling on motorways in as little as ten years time – and the EU-financed SARTRE project has carried out the first successful demonstration of its technology at the Volvo Proving Ground close to Gothenburg, Sweden.

This is the first time the EU-financed development teams in SARTRE try their systems together outside the simulators.

“We are very pleased to see that the various systems work so well together already the first time,” says Erik Coelingh, engineering specialist at Volvo Cars. “After all, the systems come from seven SARTRE-member companies in four countries. The winter weather provided some extra testing of cameras and communication equipment.” 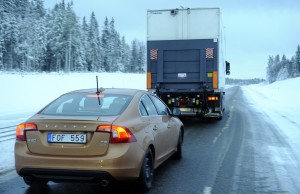 The tests carried out included a lead vehicle and single following car. The steering wheel of the following car moves by itself as the vehicle smoothly follows the lead truck around the country road test track. The driver is able to drink coffee or read a paper, using neither hand nor foot to operate his vehicle.

The technology development is well underway and can most likely go into production in a few years time. What may take substantially longer are the public acceptance and the legislation where 25 EU governments must pass similar laws. 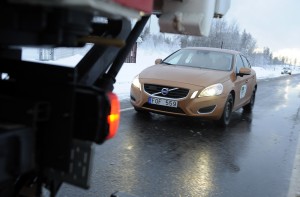 The program is funded in part by the European Commission, a group of European companies and Volvo Car Corporation and Volvo Technology of Sweden.

The SARTRE project formally started in September 2009 and will run for a total of three years.?To see more about this program go to www.SARTRE-project.eu.