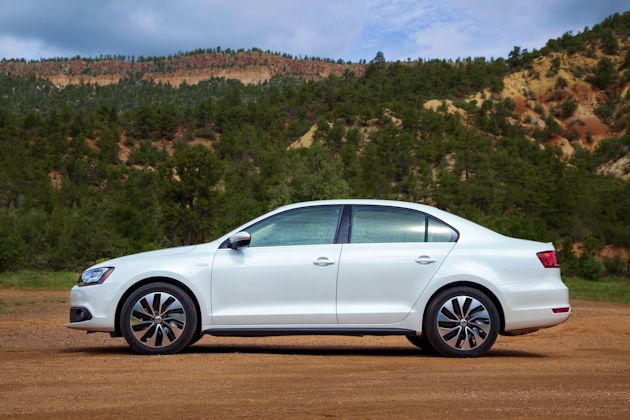 The 2014 Volkswagen Jetta is a significant part of the VW story at it enters its 30 year in the U.S. market. Jetta is also Volkswagen?s number on selling car in the United States and the third best-selling car of all models worldwide.

The Jetta is one of those cars that has a model for nearly every budget by offering 15 variations with prices ranging from $17,715, including the destination charge, for the S and up to $32,715 for the Hybrid SEL Premium. Along the way the Jetta is offered with three gasoline engine variations, one diesel and one hybrid. 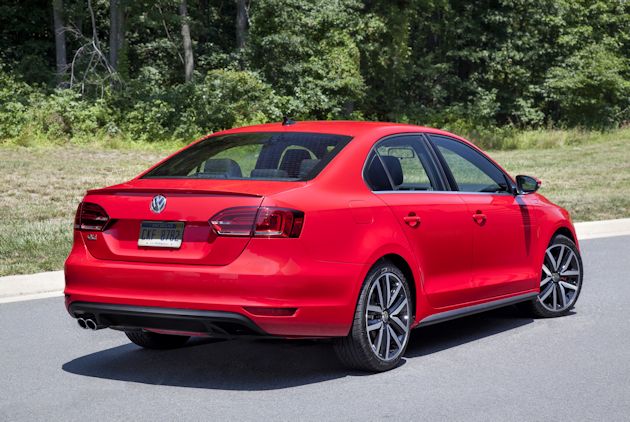 Keeping pace with the industry trend to down size engines, for 2014 Volkswagen has dropped its standard 2.5-liter five-cylinder engine in favor of a more efficient and powerful new 1.8-liter turbocharged direct injection four-cylinder engine. Producing 170-hp (the same as the five-cylinder) the new engine bumps up the fuel economy to an EPA estimated 25 mpg city and 36 mpg highway with the automatic transmission ? that?s 5 mpg better than the old engine, too.

The 2014 Jetta also gets other improvements like a more sophisticated new rear multilink suspension replacing the old torsion-beam layout on several models. The steering is upgraded on models with the new 1.8T engine that has a new more economical electric-assist system. 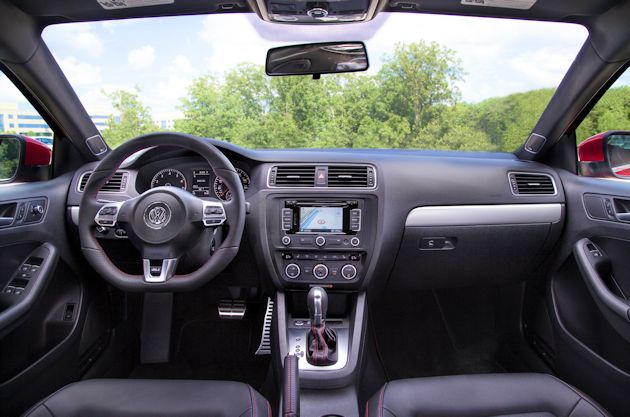 Our test vehicle, a 2014 Volkswagen Jetta GLI Autobahn with Navigation, was near the top of the Jetta family tree in terms of features and pricing. The GLI version is also the only Jetta equipped with one of our favorite four-cylinder engines, the turbocharged 2.0-liter four-cylinder, which is rated at 210-hp in the 2014 model. It?s a slightly more powerful version of the engine used in the highly regarded VW GTI. As the sportiest of the Jetta models, the GLI also gets a special sport suspension, lowered ride height and VW?s XDS? Cross Differential System ? an electronic limited slip differential.

We are always surprised by this engine because it seems to have more power than the numbers indicate. There?s an ever so slight hesitation when the throttle is floored, but then 0 to 60 mph takes only 6.5 seconds. Even with the quick acceleration and front wheel drive, the VW engineers have done a good job of curbing torque steer ? you have to turn the wheel and accelerate hard to get any hint of front wheels pulling to the side.? 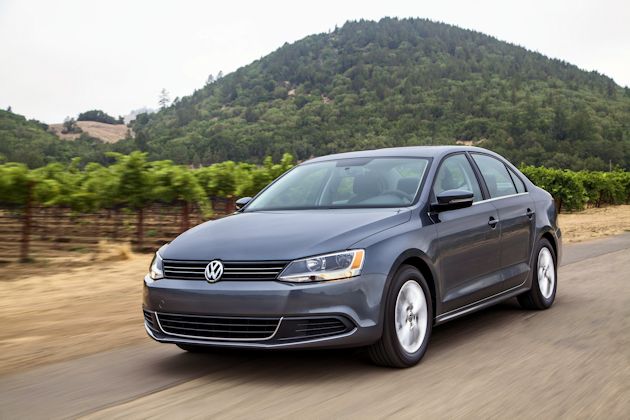 Fuel economy, by EPA estimates, is 24 mpg city, 32 mpg highway and 27 mpg combined. After a week behind the wheel, the trip computer says we averaged 28.8 mpg. The GLI is available with a six-speed manual, or our other favorite the six-speed DSG transmission. This double-clutch automatic shifts quicker up or down, than we possibly could manually. It also offers a more driver control by using the steering wheel-mounted shift paddles. 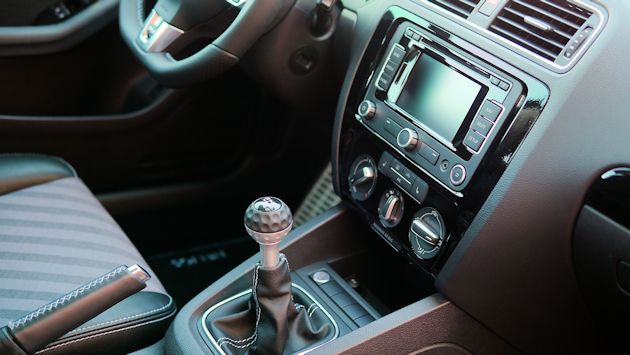 As the standard bearer for the Jetta lineup the GLI Autobahn gets a long list of extras like 18-inch alloy wheels, bi-Xenon headlights, power sunroof, push-button start, Fender audio, SiriusXM? satellite radio, rearview camera and multiple other comfort and convenience features. Of course these are in addition to all of the standard features like heated seats, power windows, cruise control, etc. One thing that always surprises us is the seats, which seem like leather, but they aren?t; they are VW?s V-Tex Leatherette, which is hard to tell from the real thing.

Our test vehicle included the color navigation system that shares its screen with the audio system. It?s a fairly intuitive system, but is placed too low on the center console requiring the driver to take his or her eyes off the road. The smaller size also makes it difficult to operate. We?d like to see a larger screen mounted higher. 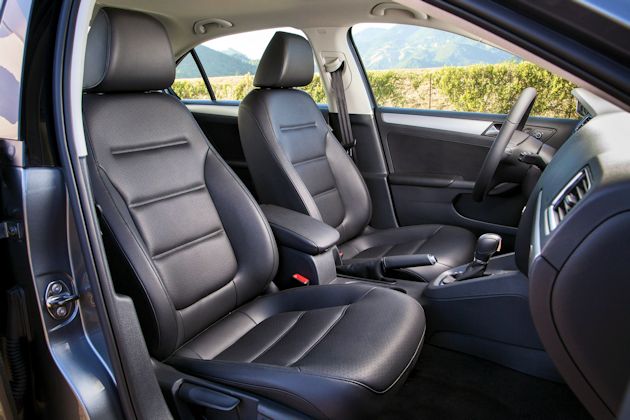 We like the uncluttered design of the dash with its soft touch materials and the convenient organization of controls. The contrasting French stitching on the seats and wheel give the GLI a more upscale look, but it lacks the richness of some competitors.

The GLI offers a good comfortable, supportive seating position designed with the driver in mind. We also like the flat bottomed fat steering wheel. The rear seat is comfortable and spacious with room for real people legs. Trunk space is a generous 15.5 cubic feet allowing plenty of space for the luggage on a road trip or shopping trip. The rear seat back is split 60/40 to expand the cargo capacity in stages. There is also a pass-through in the middle designed to handle long items like skis or fishing poles.

An important feature for younger drivers is the Media Device Interface or iPod? adapter which has been relocated to the center console, so the driver can actually reach it without leaning over to the glove box. 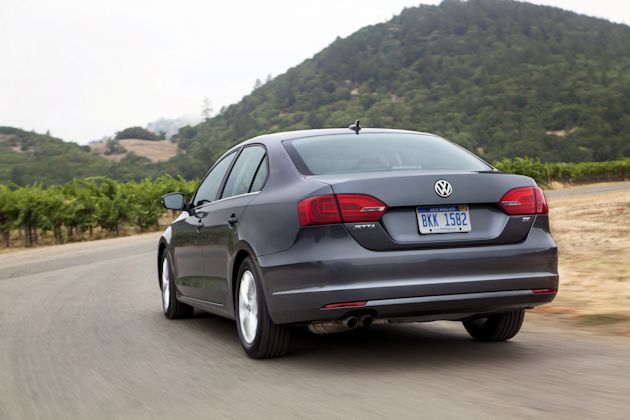 Volkswagen is fashionably late with its in-car connectivity, but the new VW Car-Net? appears to be a good system. It includes Automatic Crash Notification, roadside assistance, and stolen vehicle location assistance. In addition, VW Car-Net adds: remote vehicle access; boundary and speed alerts; a vehicle health report; and an enhanced point-of-interest service on vehicles equipped with a navigation system. The Car-Net connects through a handy smartphone app.

It?s easy to see why the Jetta is so popular, plus it gives the owner the legendary ?German engineering? without having to pay the typically high German pricing. 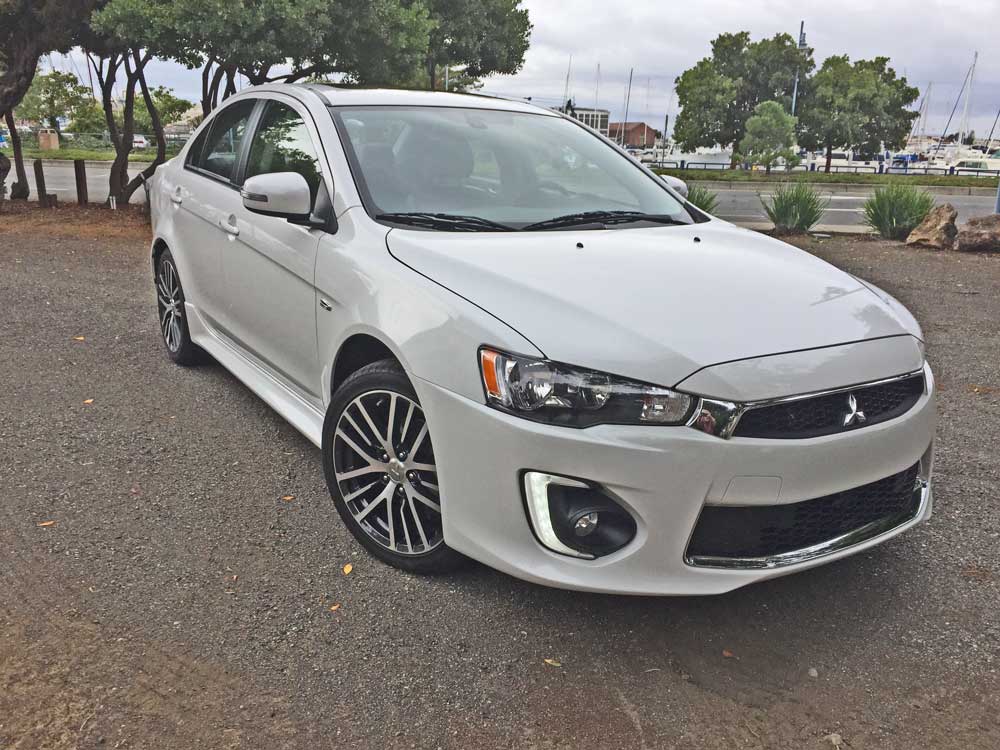