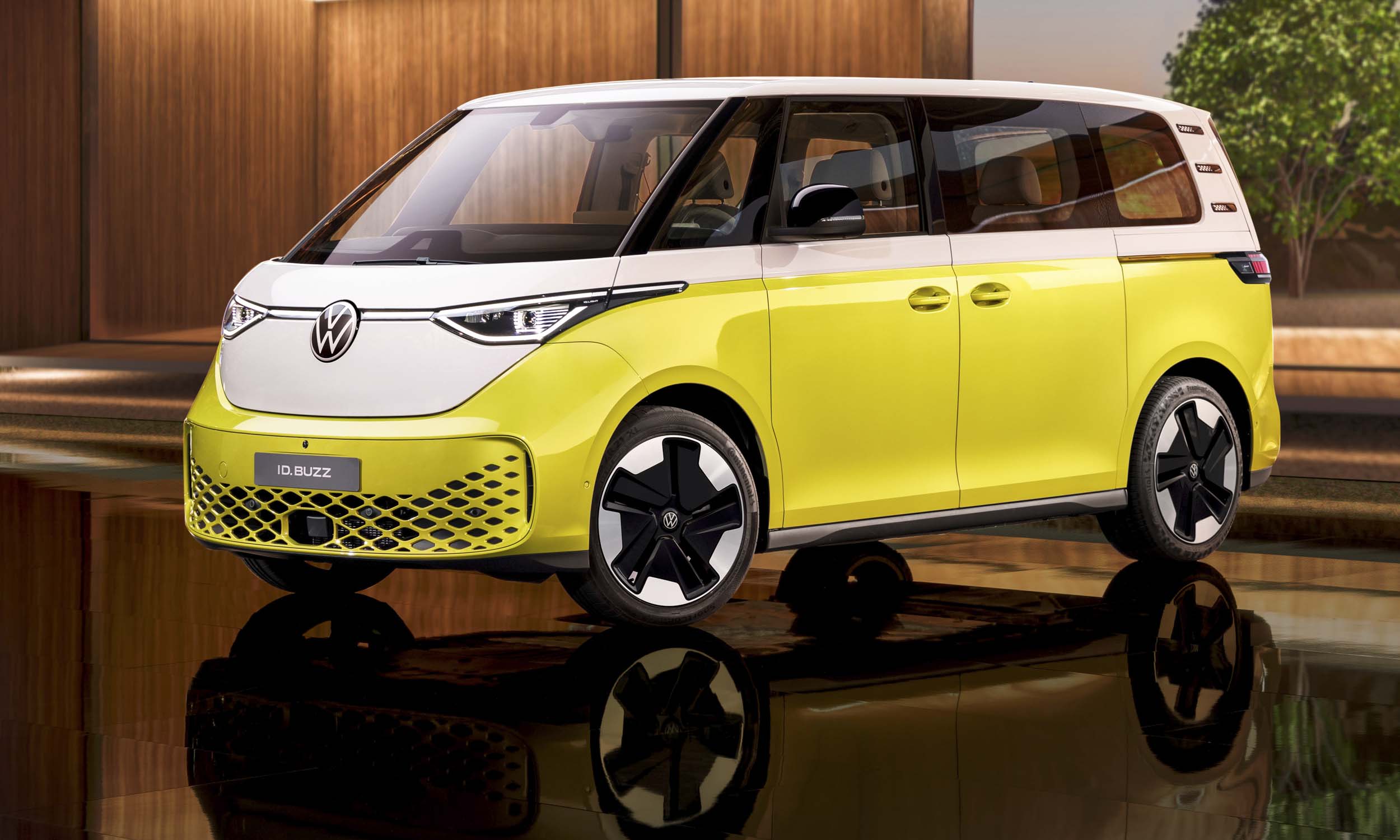 The Buzz Is Back
At the 2017 North American International Auto Show in Detroit, Volkswagen grabbed the limelight when it debuted the I.D. Buzz concept — an all-electric van created in homage to the beloved T1 Microbus of years past. At the time the German automaker promised the I.D. Buzz concept would make it to production, and today that promise is kept as the production-version Volkswagen ID. Buzz makes its debut. 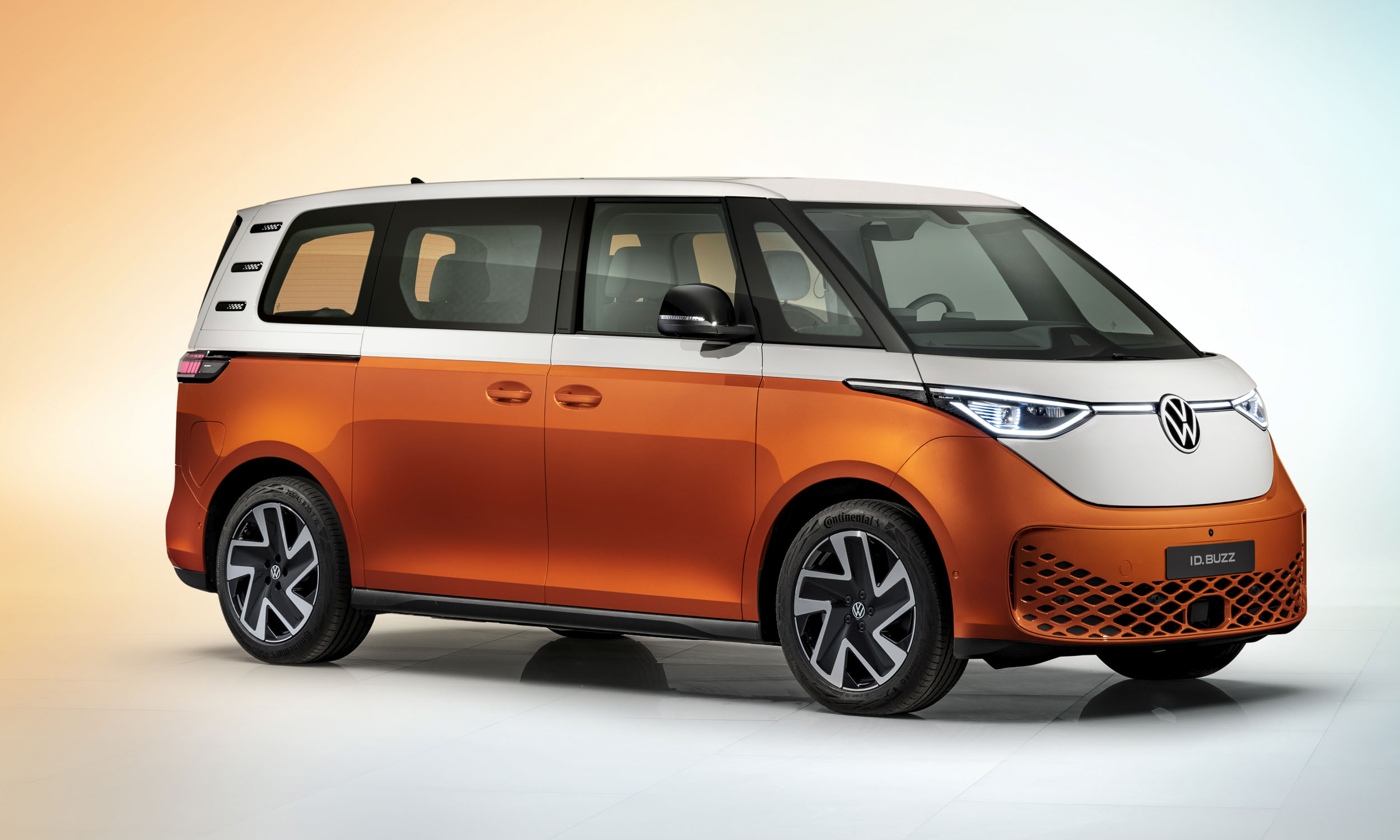 Europe Only — For Now
The ID. Buzz introduced today is specifically for the European market, with sales expected to begin in the third quarter of 2022. Unless specified, all features and specs listed here are for the European versions; details about the American-spec ID. Buzz will be available closer to its launch date in 2024. 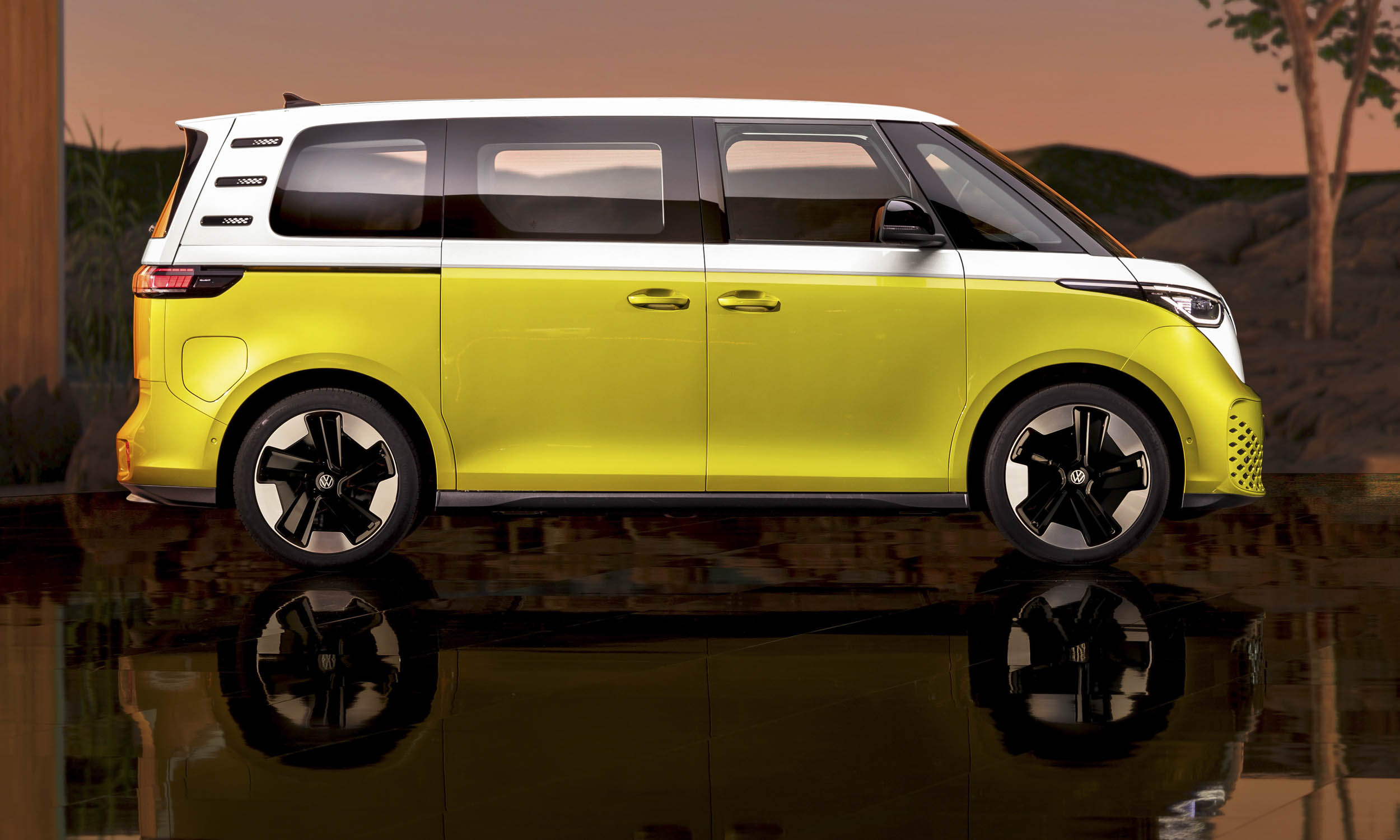 Honoring the Original
“The T1 — an icon of the 1950s — represents freedom and the democratization of mobility. With the ID. Buzz, we are transferring the T1 DNA to the present day and thus into the era of electric mobility and sustainability,” said Head of Volkswagen Design Jozef Kaban. “We very consciously ensured that we were not making another T1. The ID. Buzz shows that it is successfully transferring the genes and stylistic elements of that iconic vehicle into the digital era,” Kaban observed. 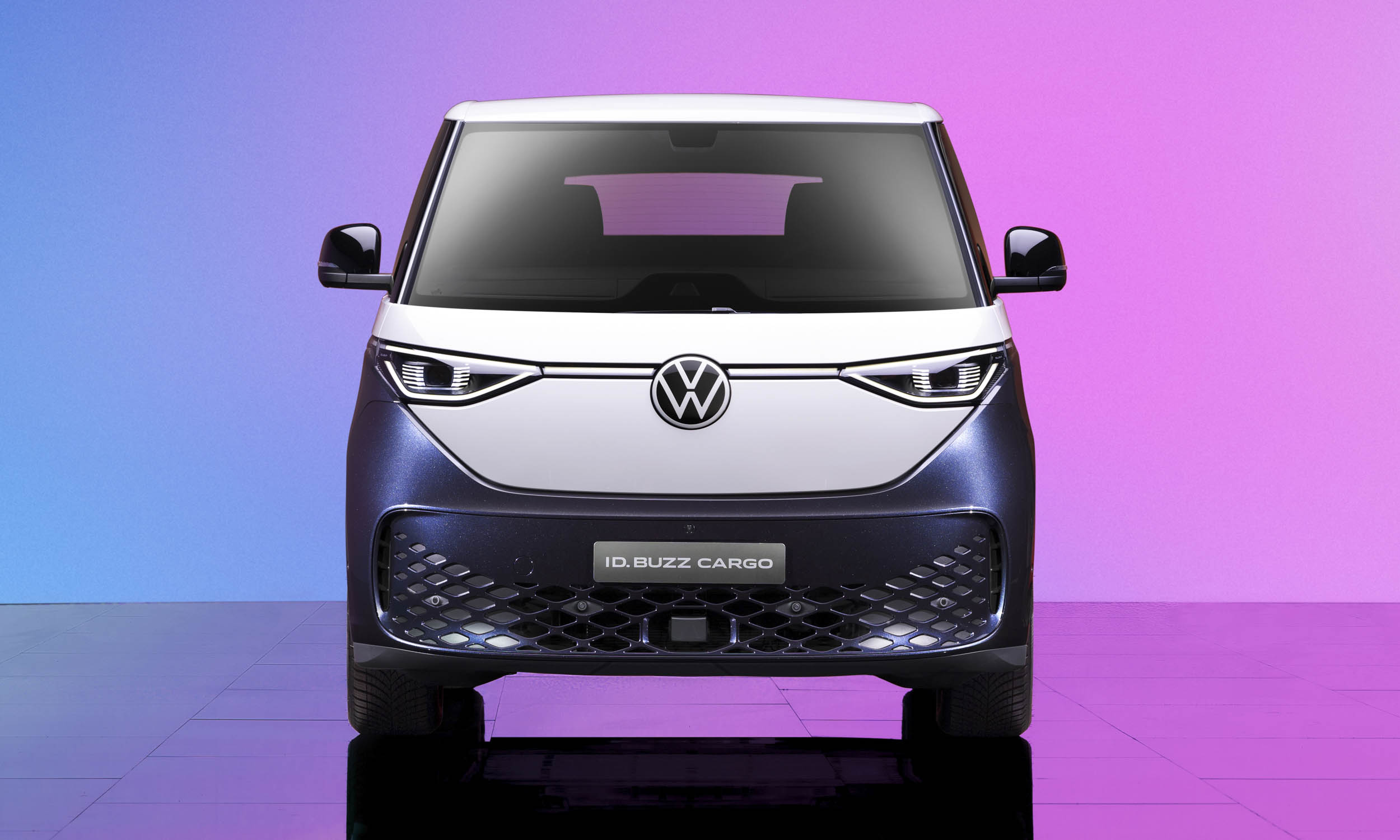 Styling Like the Concept
Designers of the ID. Buzz were able to take advantage of the vehicle’s electric drivetrain, which allows for short front and rear overhangs. This configuration maximizes interior space while keeping the overall footprint more compact than a similar vehicle with a conventional drivetrain. Up front shine uniquely styled LED headlights with integrated daytime running lights and a slim, lateral light bar between the two headlights. The VW logo on the ID. Buzz is much larger than on other Volkswagen models — a throwback to the original T1 Microbus. 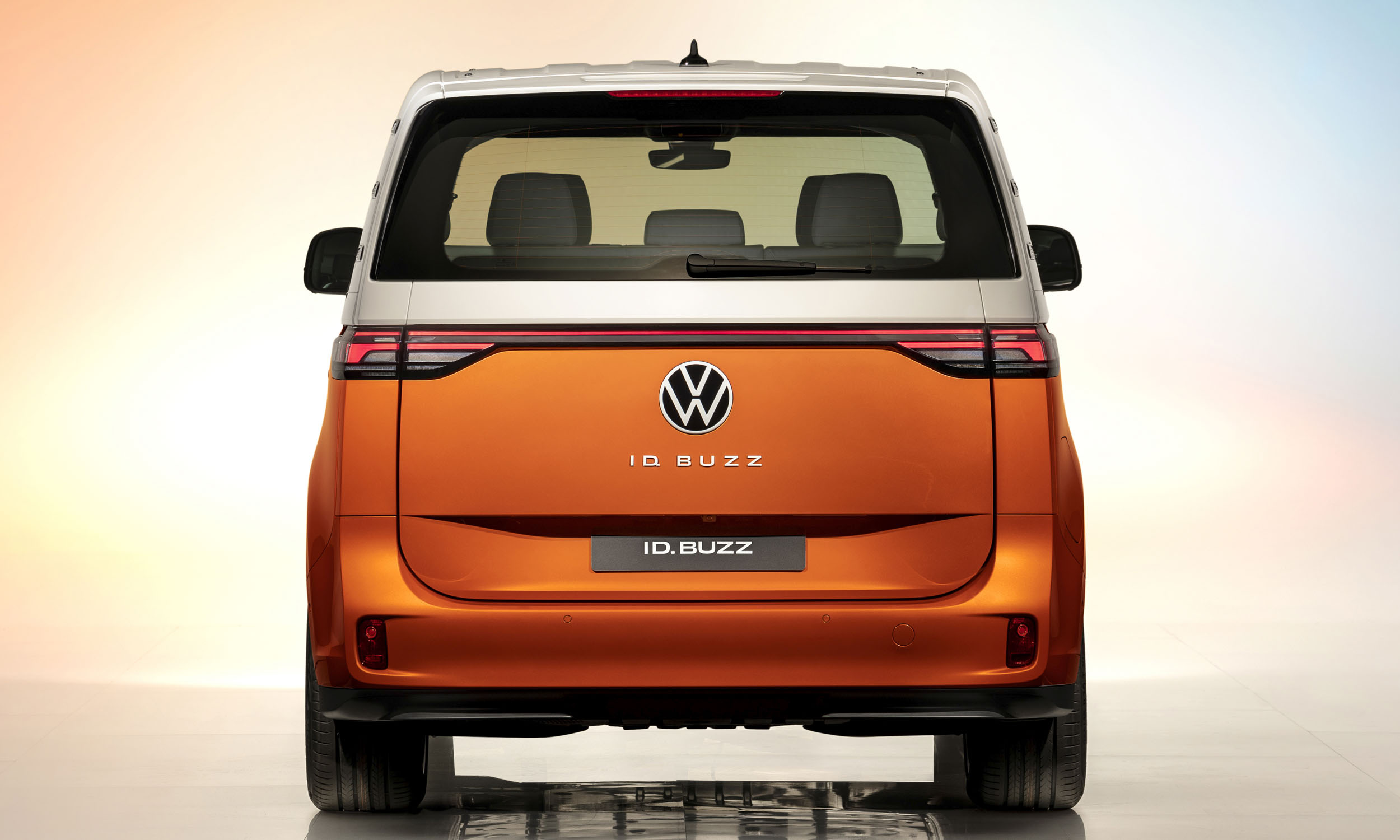 Rear View
LED taillights dominate the rear view of the ID. Buzz, with the horizontal taillights connected by a light strip that spans the width of the tailgate and echoes the lights up front. The rear hatch is adorned with another large VW logo. 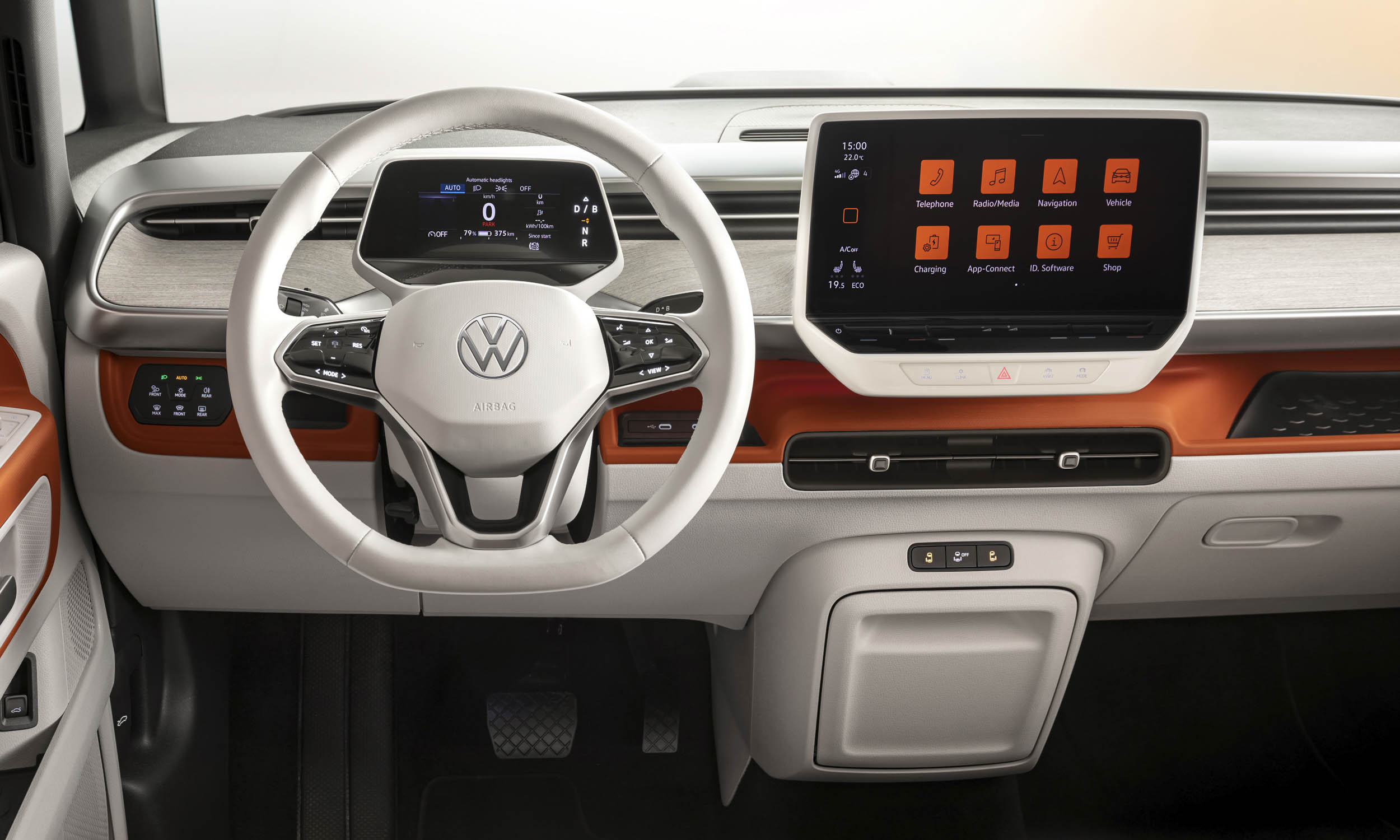 High-Tech Look
The ID. Buzz features both a 10-inch Digital Cockpit driver’s display and 10-inch infotainment screen — a 12-inch version with navigation is also available. The screens are connected to the dashboard along their bottom edges, which gives the impression of floating tablets. Additional buttons below the infotainment system allow easy access to climate control, driver-assist systems and parking functions. Wireless charging and multiple USB ports provide power for everyone’s mobile devices. 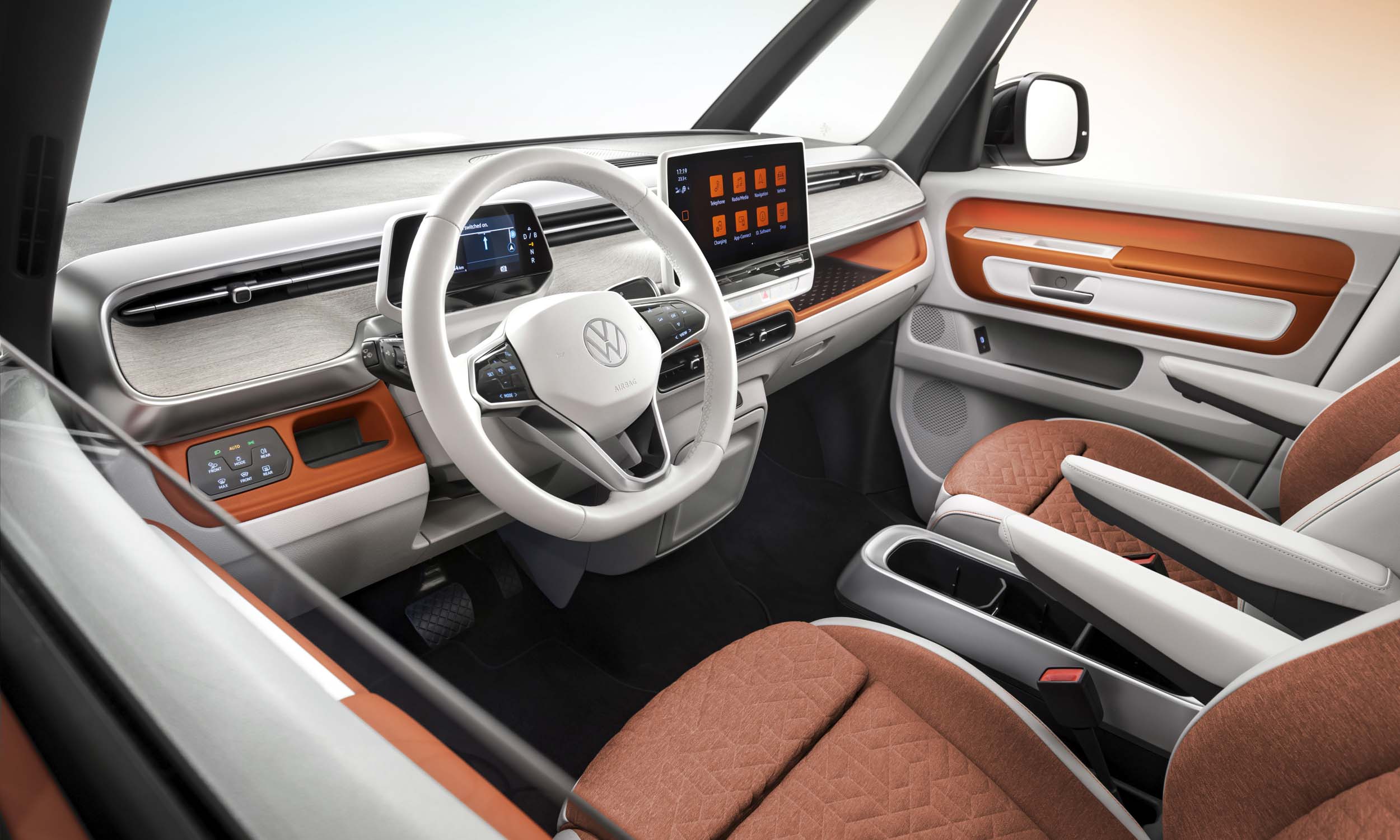 Center Console
A feature that had its origins in the Detroit Show concept vehicle, the available center console of the ID. Buzz is adjustable or removable. Unique to the ID. Buzz, the upper section features storage bins and a large flip-lid compartment, while the lower portion contains a drawer large enough to carry a tablet or laptop. The entire console can be removed, or in the three-row ID. Buzz it can be moved aft to reside between the second-row seats. 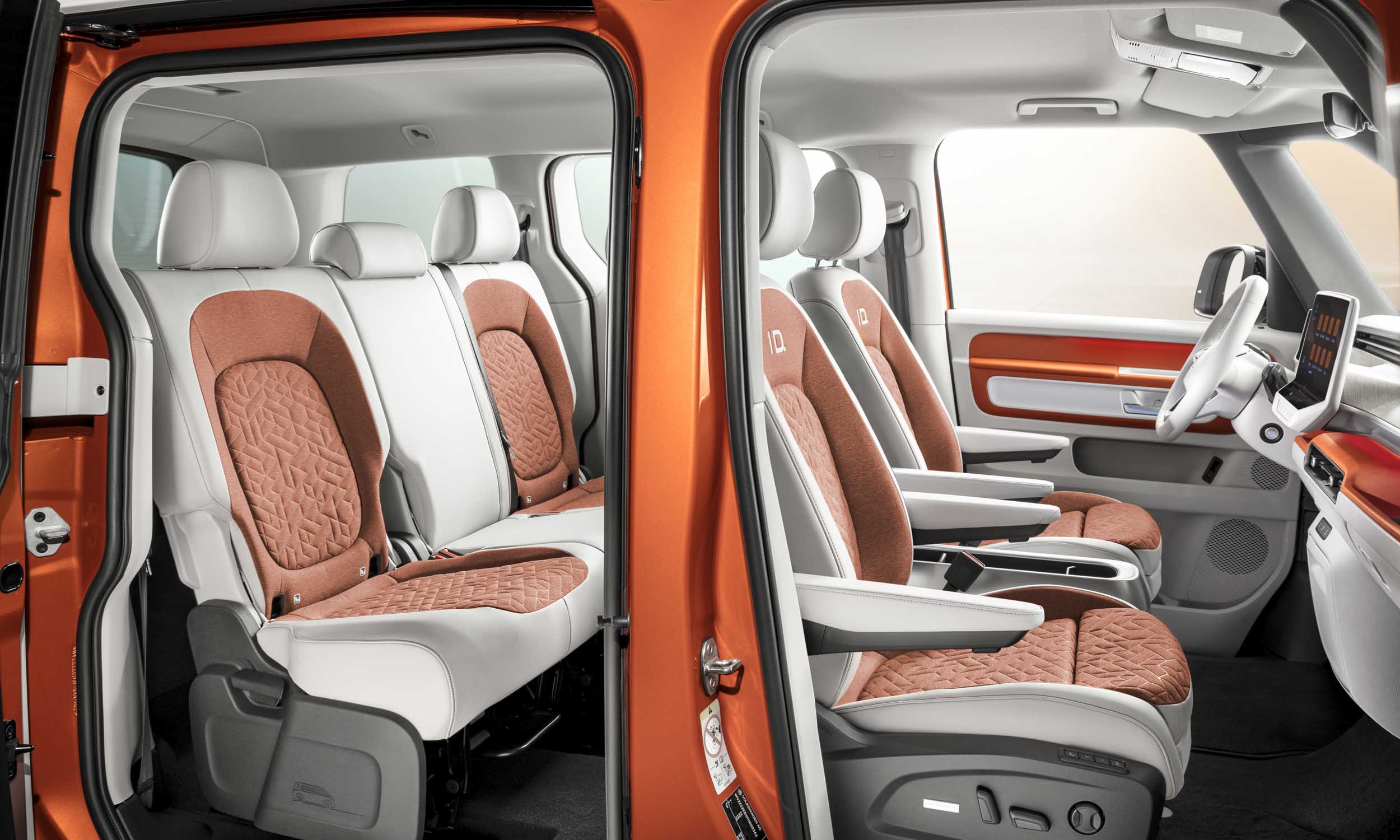 Sustainability Focus
Volkswagen employs sustainable materials throughout the ID. Buzz and has forgone any use of leather in the vehicle. Seat covers, floor liners and headliner are all made from recycled materials, and the steering wheel has the look and feel of leather but is actually polyurethane. VW will also offer a new fabric woven from yarn called SEAQUAL, which is comprised of 10 percent plastic recovered from the ocean and 90 percent recycled PET bottles. Exterior paint will be organically based, and finally the high-voltage battery does not use any cobalt in its construction. 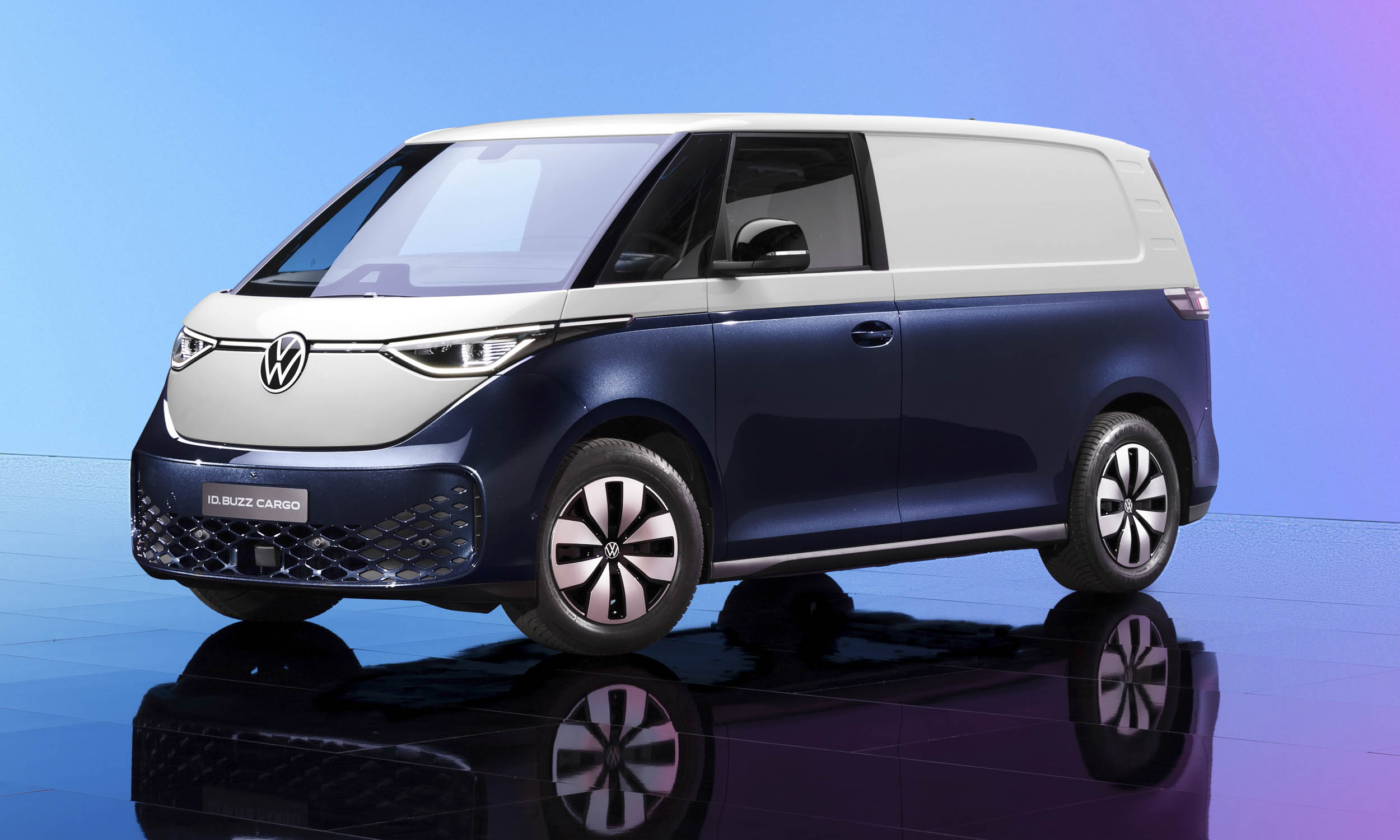 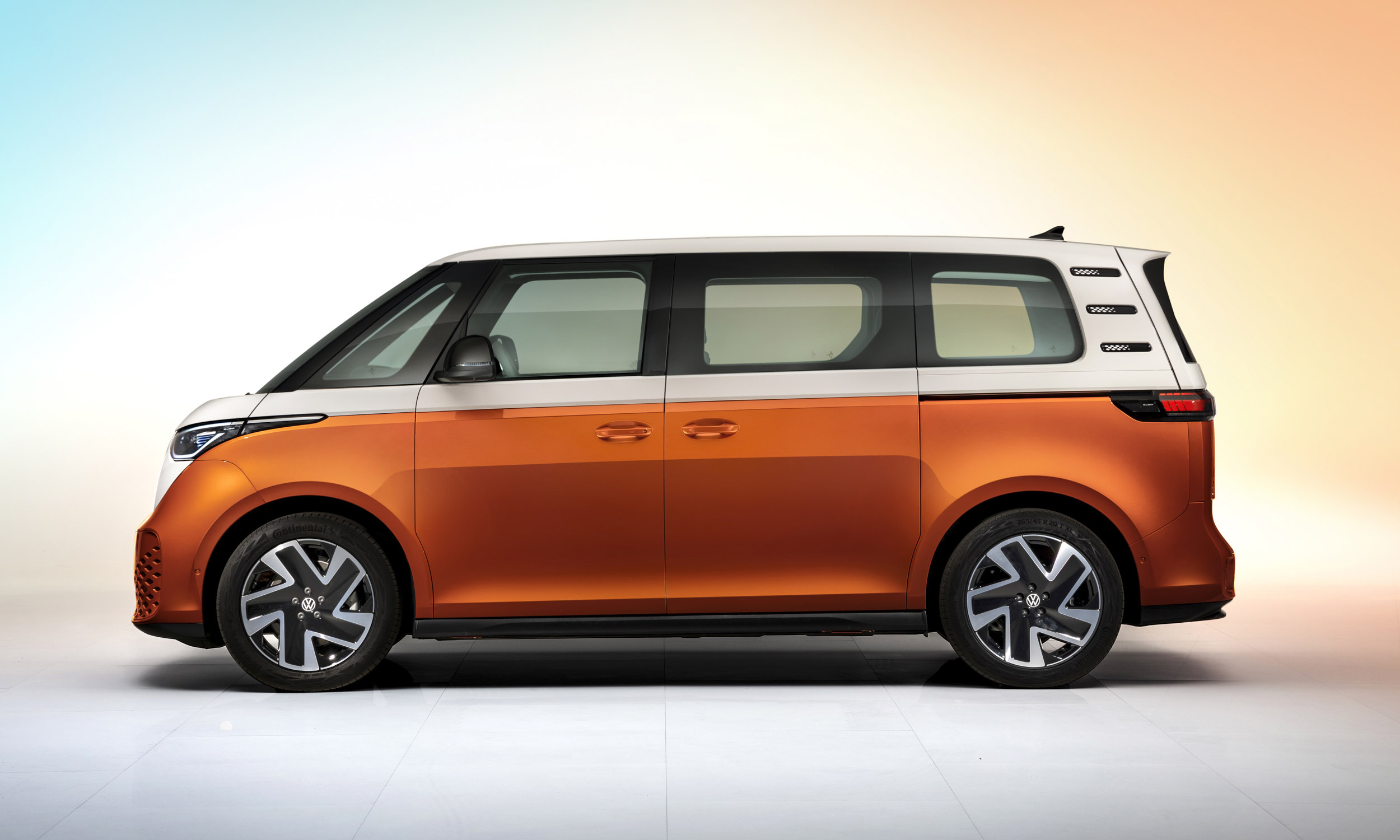 Electric Power
The first versions of the ID. Buzz arriving in Europe later this year will feature a 201-horsepower single electric motor driving the rear wheels. Top speed will be electronically limited to 90 mph. A lithium-ion battery provides power, delivering a net 77 kWh. Batteries are mounted in the floor to give the ID. Buzz a lower center of gravity for improved handling and performance. 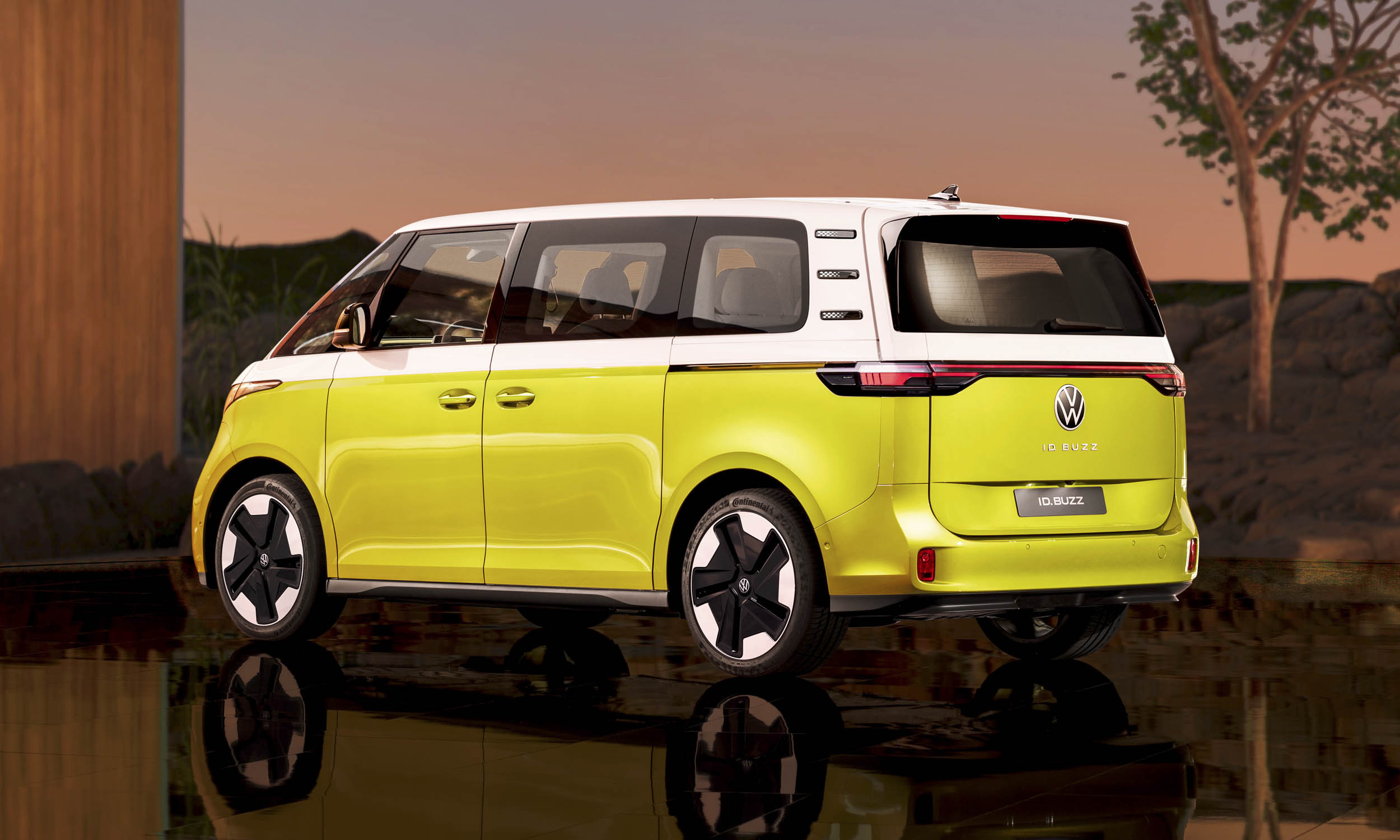 Charging
With a DC fast charger, the ID. Buzz can accept up to 170 kWh, which can bring the charge from five to 80 percent in about 30 minutes. (Volkswagen will announce the total range at a later date.) We expect the American-spec version will offer more power with an extended-range battery and a likely dual-motor all-wheel-drive configuration — but we’ll have to wait until next year for confirmation. 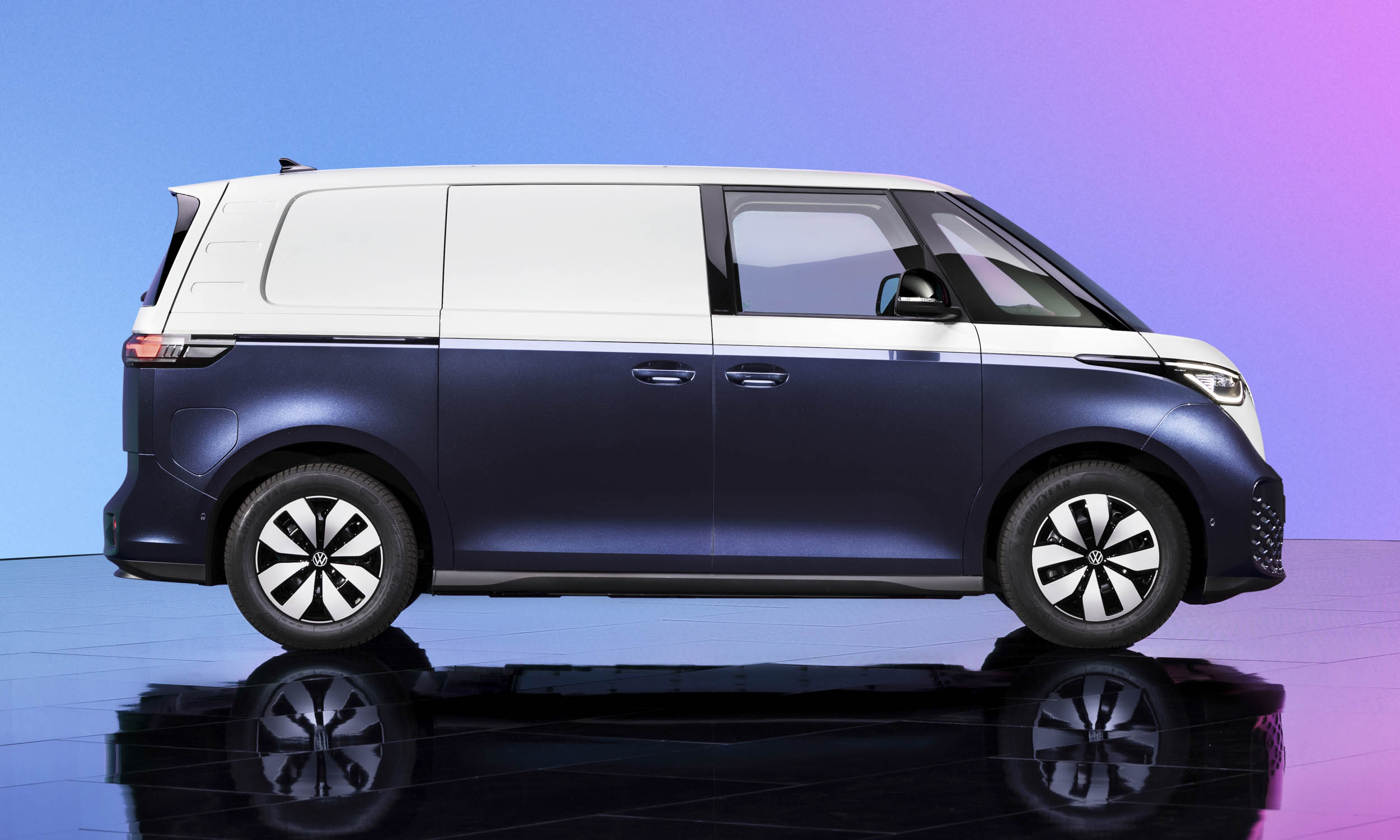 MEB
Like the ID.4 and other upcoming models of VW’s family of electric vehicles, the ID. Buzz gets built on the company’s MEB modular electric drive platform. This new platform is designed for flexibility among vehicle configurations, so it can underpin a variety of vehicle types yet still be scalable for mass production. 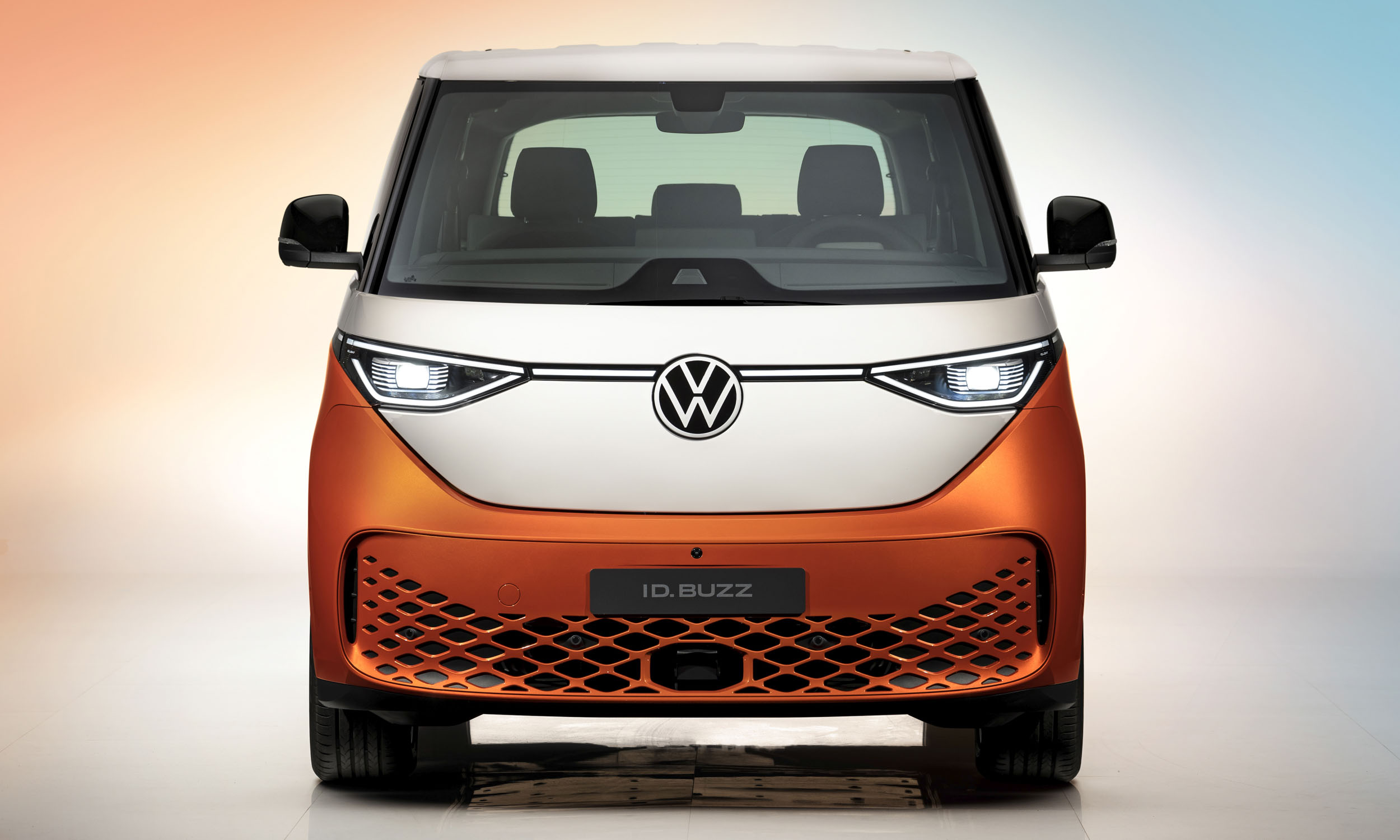 Coming to America (Eventually)
Volkswagen has not provided many details about the American-spec ID. Buzz. However, we do know it will be built on a longer wheelbase (current European versions are on the standard wheelbase) and will make its debut sometime next year. Expect the ID. Buzz to arrive in American showrooms in 2024.