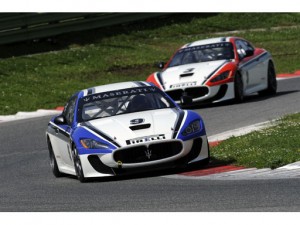 The Trofeo Maserati GranTurismo MC is a European racing series for the Maserati GranTurismo sports coupe. Maserati says the series is for “gentleman-drivers” – which in the world of high-dollar Eurocars means “really rich guys who want to go racing and aren’t afraid to lay out big bucks to be treated like F1 drivers.” The championship is held over seven rounds on the most prestigious European circuits, together with WTCC.

The series turned on the ignition with the pre-championship test held on April 24-25 in Vallelunga, a prep for the first practices in Monza on May 23. A long-run simulation was done to make the final checks of the cars assigned to signed-up drivers. One of the protagonists of the test has been Emanuele Smurra, the winner of the first Trofeo Maserati held in 2003. 16 other drivers from various European countries also participated in the test.