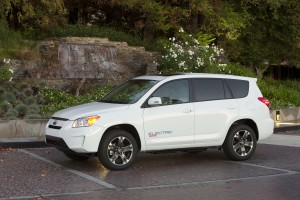 Toyota unwrapped its second generation RAV4 EV at the recent LA Auto Show and announced it plans to build 35 of the vehicles for a demonstration and evaluation program with their new electric vehicle partner Tesla Motors. Toyota planners have targeted an operating range of 100 miles in actual day to day driving patterns and in a variety of climates and conditions.

Tesla was responsible for building and supplying the battery, as well as other related parts, that met specific Toyota engineering specifications in performance, quality and durability. Toyota was responsible for development and manufacturing leadership and the seamless integration of the powertrain. 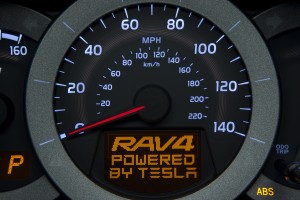 ?From the beginning, the customer experience has been the focus,? said Lentz, president and chief operating officer, TMS. ?In other words, how do we deliver an unconventional product to mainstream customers that is compelling and affordable and that offers an acceptable level of daily convenience.?

?When we decided to work together on the RAV4 EV, President Akio Toyoda wanted to adopt a new development model that incorporated Tesla?s streamlined, quick-action approach,? said Jim Lentz ?The result was a hybrid ? a new decision and approval process and a development style that our engineers refer to as ?fast and flexible.? 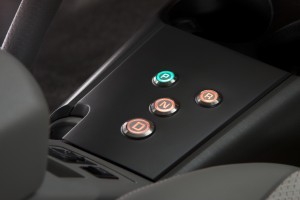 Led by the Toyota Motor Engineering and Manufacturing North America (TEMA) Technical Center in Michigan, the new development model helped reduce development time without compromising product quality. The team has accomplished this by approaching the project as they would a typical mid-cycle ?major-minor? product change. Specifically, midway through a generation, the team began with a fully engineered current-generation RAV4, to which was added a major powertrain option, along with minor feature and cosmetic changes.

A large part of the team?s focus on the customer experience targeted driveability. In this case, the end goal is a vehicle with characteristics as close to the conventional RAV4 as possible. For example, the demonstration vehicle weighs approximately 220 pounds more than the current RAV4 V6 yet it will accelerate from zero to sixty nearly as quickly.

The demonstration vehicle Toyota is currently testing is powered by a lithium metal oxide battery with useable output rated in the mid-30 kWh range. However, many decisions regarding both the product, as well as the business model, have not been finalized. Battery size and final output ratings, as well as pricing and volume projections of the vehicle Toyota plans to bring to market in 2012, have not been decided.

As for a final assembly location, Toyota is considering many options and combinations. The basic vehicle will continue to be built at its Canadian production facility in Woodstock, Ontario. Tesla will build the battery and related parts and components at its new facility in Palo Alto, Calif. The method and installation location of the Tesla components into the vehicle is being discussed. 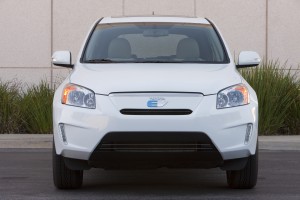