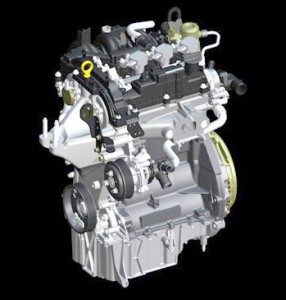 As engine displacements get smaller to save fuel, Ford?s latest little entry wins a big prize as it today was named 2012 ?International Engine of the Year? by a panel of 76 journalists international journalists from 35 countries.

The 1.0-liter EcoBoost engine uses a low-inertia turbocharger to deliver power quickly when the throttle is opened from low rpm. The turbocharger?s impeller delivers high power at speeds of up to 248,000 rpm.

The engine ? small enough to fit on a sheet of 8.5 x 11-inch paper? was designed at Ford?s technical centers in Dunton, U.K., and Merkenich, Germany. The engine is built in Ford?s plants in Craiova, Romania, and Cologne, Germany.

In addition, the little engine also hauled in two other awards ? ?Best New Engine? and ?Best Engine Under 1.0-Liter.? ?The awards were presented by Engine Technology International magazine.

?We set the bar incredibly high when we set out to design this engine,? said Joe Bakaj, Ford vice president, Global Powertrain. ?We wanted to deliver eye-popping fuel economy, surprising performance, quietness and refinement ? and all from a very small three-cylinder engine.

?The team responded to this seemingly impossible challenge with some really exciting innovation,? Bakaj added. ?The result is a game changer for gas engines globally.?