Comedian Tim Allen, best known as Tim ?The Tool Man? Taylor on television?s ?Home Improvement? sitcom?in the 1990s and on the big screen in movies like ??The Santa Clause? and many other comedies, is the new voice of Chevrolet TV advertising.? Allen?s first spot, starting in September will be for the new Chevy Cruze.

?Tim Allen brings the right combination of a recognizable voice with the credibility, likeability and humor that will connect with viewers,? said Joel Ewanick, vice president, U.S. marketing, General Motors.? ?His passion for all things cars makes him the perfect match for the Chevrolet brand.?

Allen is a native of the Detroit area and has a long-standing love affair with automobiles. 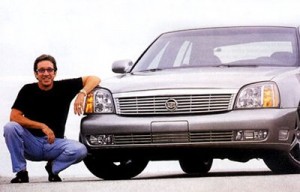 He has an extensive car collection, including personally designed versions of a 1996 Chevrolet LT5 Impala SS, a 2000 Cadillac DeVille DTSi.

Allen will debut in the advertising for the all-new Chevrolet Cruze, which will use accolades from the news media and comparisons to competitive cars in the compact segment to introduce the Cruze to the marketplace. These ads will be followed by additional television ads with a large social media component, product integration in relevant shows and events, as well as advertising specific to the features and benefits of the Cruze.

?Tim Allen will be the voice in our Cruze advertising, but the car will be the star,? Ewanick said. ?Our communication on the Cruze will highlight the car, its features and its competitive advantages.?

Advertising will ramp up later this fall, as the Cruze begins arriving in volume at dealerships.

The TV ads were produced by Goodby, Silverstein and Partners and include four :30 second spots.

The Cruze offers the spaciousness and amenities of a midsize car with the fuel economy of a compact. The Cruze also affirms Chevrolet?s commitment to building refined, fuel-efficient vehicles using new, small-displacement, four-cylinder engines. The Ecotec 1.4L I-4 turbo with variable valve timing received an Environmental Protection Agency fuel economy rating of 26 miles per gallon in city driving and 36 mpg on the highway for the manual transmission and 22/35 for the automatic. The Cruze Eco model launching later this year is expected to get 40 mpg on the highway.