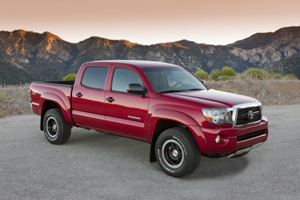 Toyota has been making compact trucks longer than I have been alive, so by now they are getting good at it.??The Toyota Tacoma remains the dominate force in the compact segment evolving with the market by? adding more room and power to meet market demands with a rugged and reliable edge.

Now in its eighth generation, the compact Toyota pickup dates back to 1964 with the names Stout, Hilux and finally the Tacoma. ?Over that period, sales have passed five and one-half million and today the Tacoma commands nearly 40 percent of the compact pickup segment in the U.S. ?The Tacoma outsells its nearest competitor by nearly 2 to 1. 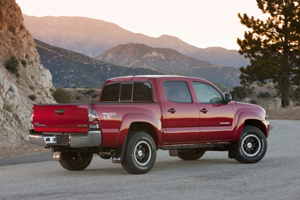 Under the Hood of the 2010 Toyota Tacoma, you have two engine choices.??A 2.7-liter four-cylinder that will give you 159-horsepower and 180 lb-ft of torque or a 4.0 liter V-6 engine that produces 236 horsepower and??266 lb-ft of torque.??Toyota has added an electronic Throttle Control System, which contributes to the engine?s strong performance and helps with fuel economy.??Toyota offers both a manual and automatic transmission and a choice of two and four-wheel drive.

The 2010 Tacoma comes in 18 different body configurations with three cab types — ?regular cab, ?Access Cab and the four-door Double Cab.??The truck stands out in a crowd with its bold headlights and dominate grill.??Flush rear surface glass and surface structures between the bumper sides and body contribute to a clean look.??To help with Fuel economy the Toyota engineers crafted the inner bed of a sheet-molded compound that is 10 percent lighter than steel yet tough and durable. 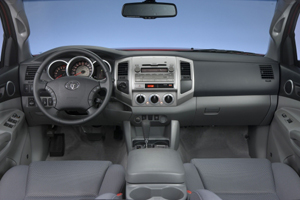 The Interior is well laid out and functional allowing the vehicle to be used for utility or everyday driving.??Overall, ?the Toyota Tacoma delivers utility and functionality in a rugged reliable package.