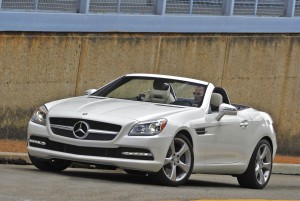 Owners of the new Mercedes-Benz SLK55 AMG will be getting the best of both worlds with the new 5.5-liter V-8 engine.? Boasting an increase of 60-hp for the SLK55 from the previous version, up to 415-hp, the engine also is consuming about 30 percent less fuel.

The new AMG Cylinder Management system and direct fuel injection are responsible for the magic that provides the seemly contradictory characteristics.

The Cylinder Management cuts the powerful V-8 engine back to four cylinders when cruising, coasting or similar partial load situations.? This in turn, cuts the fuel consumption by 30 percent. 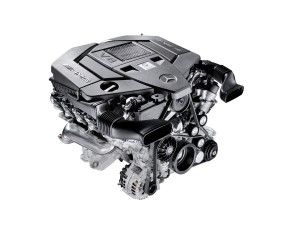 The distinctive AMG 5.5-liter V-8 engine is being used exclusively in the all-new 2012 SLK55 AMG, which will celebrate its world premiere at the International Motor Show (IAA) in Frankfurt/Main in September. This means that the SLK55 AMG will remain the only roadster in its segment with an eight-cylinder engine.

Fuel economy estimates have not yet been released.

The new M152 is based on the AMG M157 5.5-liter V-8 biturbo engine, which first debuted on the 2011MY CL63 AMG and S63 AMG. Numerous components and systems are basically identical, e.g. the displacement, bore/stroke, distance between cylinders, ECO stop/start system and direct injection technology.

“Thanks to the innovative AMG Cylinder Management system and other high-tech components, our newly developed AMG M152 naturally aspirated eight-cylinder engine achieves the fuel economy of a four-cylinder with the muscular power delivery and emotional sound experience of a V-8. A sports car engine with technology taken from Formula 1 – I am convinced that the new SLK55 AMG will meet the high expectations of all sports car fans,” says Friedrich Eichler, head of powertrain development at Mercedes-AMG GmbH.

The AMG Cylinder Management cylinder shut-off system, developed completely by Mercedes-AMG, significantly improves efficiency: cylinders two, three, five and eight are cut off under partial load, which considerably lowers fuel consumption. This technology is similar to what?s used in the 750-hp V8 engines used in Formula 1. Since efficiency also plays a major role in this ultimate form of motor racing, two or four of the eight cylinders are cut off when cornering at low speed, during Safety Car laps or for pit stops. 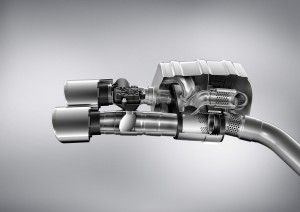 For the first time AMG is also using a sports exhaust system featuring an exhaust flap on each side. This technology resolves the age-old conflict of an emotional sound during spirited driving and a more discreet engine note at low speed operation.

Each of the two rear silencers has a flap, which is variably activated on a logic-controlled basis depending on the driver’s accelerator input and the engine speed. At low loads and engine speeds below 2,000 rpm the flaps remain closed. This causes the exhaust gases to cover a longer distance and flow through an additional damping element, so that the engine sound is pleasantly subdued and irritating frequencies are effectively suppressed.? When the driver accelerates, the flaps open at an angle of 15, then 30 and up to 50 degrees so that some of the exhaust gases cover a shorter distance. This produces a sonorous engine note. Under full load at higher engine speeds, in performance-oriented eight-cylinder operation, both flaps are fully opened so that the occupants are able to enjoy the muscular sound typical of an AMG V8.