Imagine an SUV that accelerates from 0 to 60 in 6.1 seconds, has a top speed of 150 mph and handles like a Porsche. ?In addition, it has excellent off-road capabilities, if someone has the heart to take it there, and did we mention it could get up to 24 mpg?

Any way you look at it, the Porsche Cayenne is an entirely different kind of SUV and this one just happens to be a Hybrid, too.

Porsche has always had a different way of looking at transportation, and the Cayenne Hybrid is yet another good example of the company blazing new trails.? Since its inception, the Cayenne has been one of Porsche?s best-selling models, much to the dismay of some Porsche purists, who maintain that a Porsche should be a sports car, not an SUV or sedan.? However, no one can argue that Porsche SUVs and sedans are anything short of amazing. 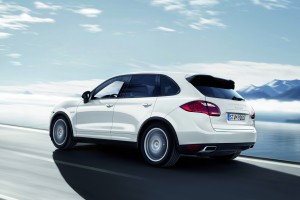 The Cayenne S Hybrid is Porsche?s first hybrid, and it’s one of most impressive hybrids we have driven.? The Hybrid is powered by a 333-horsepower supercharged V-6 engine combined with a 47-hp electric motor for a total of 380-hp.? The power runs through Porsche?s efficient new eight-speed Tiptronic S automatic transmission, which helps increase fuel efficiency about 20 percent better than the previous model.

The parallel full hybrid system allows the Cayenne to operate on gasoline or electricity alone or together, and the transitions are invisible — you only know power changes are happening by watching the gauges.? The Hybrid can travel up to 37 mph for a limited distance on the electric motor alone.

The Porsche Hybrid system also has a coasting mode that takes over when the driver is cruising, say at highway speeds, and the driver lifts off the accelerator.? To save fuel, the gas engine can completely switch off and a decoupling clutch disengages it from the drivetrain enabling the vehicle to literally coast at speeds up to 97 mph without input from either power source.? As soon as the driver presses on the accelerator, the gas engine starts smoothly, almost instantly, with the engine speed matching the speed of the vehicle.

It also has the same Automatic Start Stop system that was introduced on the Panamera along with some other fuel saving technologies.

The Cayenne is driven by a new active all-wheel drive system that drives the rear wheels under normal conditions and transmits power to the front wheels when the extra traction is needed.?? It is paired with Porsche?s new Porsche Torque Vectoring (PTV) Plus option which can vary the torque to each of the rear wheels and control the rear axle differential lock. 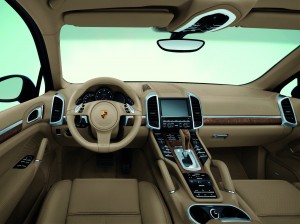 The Cayenne is all new for 2011 with a new exterior design and more new luxurious and spacious interior.? It also has a longer wheelbase creating more interior room for rear seat passengers and cargo. Now available in five models, including the new hybrid, prices range from $45,675, including the destination charge, for the V-6 Cayenne with manual transmission and peak at $106,975 for the Turbo V-8.? The S Hybrid is priced at $68,675.

Driving the Porsche Hybrid is an interesting experience.? Without noticing the changes to the instrument panel or seeing the hybrid logos on the front fenders you might think it is a V-8-powered Cayenne S.? The only times we really got an indication something was different was when the engine shut off at traffic lights and when the tachometer dropped to zero when we took pressure off the accelerator while cruising and the engine shut down.

This second-generation Cayenne is more opulent and refined than the original and with it comes a new level of quiet, at all speeds.

We especially liked the eight-speed automatic transmission, which has a more rewarding feel than the continuously variable transmissions used in many of the hybrids.? Shifts are fast and smooth, and we both appreciated being able to manually shift the transmission using the wheel-mounted shift paddles or the console mounted shifter.

Probably the most defining feature of the Hybrid is the acceleration, which is breathtaking considering this is a 5,000-pound SUV.? Between the supercharged engine and the electric motor, this thing flies and still shows the handling refinement we expect from any vehicle wearing a Porsche badge, hybrid or not. 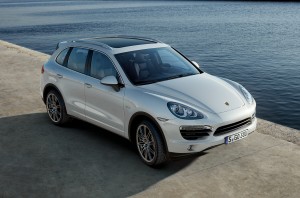 The Hybrid gets an EPA rating of 20 mpg city and 24 mpg highway and that is significantly better than the V-6 manual Cayenne.? ?During our week of driving, we actually averaged 23.7 mpg.

The Hybrid comes well equipped, but like all Porsches, there are pages of available options, and they are generally not cheap.? Our test vehicle added metallic paint, upgraded leather, larger wheels, convenience package and a few other extras to bring the price to about $87,000 ? but it is ?off the chain!?