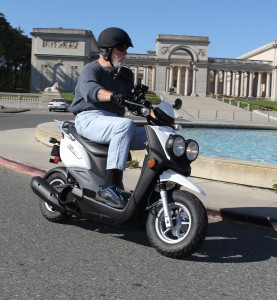 Imagine a company having enough faith and confidence in a new product?s performance potential to have the national press launch take place in the ?City by the Bay? ? San Francisco, with its steep hills and heavy commute traffic. Especially when the new product is a new 49cc scooter and several members of the moto-press are in excess of 220 pounds ? the payload for the product in question is actually 222 pounds. The company was Yamaha and the product was their new 2012 Zuma 50F scooter.

The Yamaha Zuma first made its appearance on the scooter scene with the first generation, which covered from 1989 to 2001, followed by the second generation Zuma from 2002 to 2011. So far, more than 79,000 Zumas have been sold to a variety of rider types, making it a cult favorite. The new third generation Zuma makes its debut as a 2012 model, and it has progressed from a two stroke to a four stroke, SOHC, 3-valve, liquid-cooled, fuel injected single-cylinder motor. The motor is mated to a CVT automatic transmission that delivers power to the rear wheel via a V-belt. 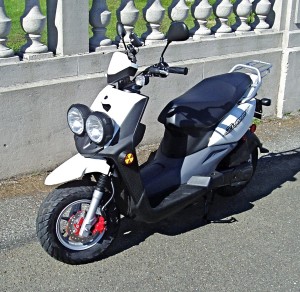 Development of the 2012 Zuma 50F was aimed at satisfying customer concerns in all areas, but focusing most heavily on style and fuel mileage. The resulting design influence was based upon a tough, rugged dirt bike image, with a separate front fender, side panels, knobby-type tires and tube-type handlebars.

Zumas are used most for both commuting and for pleasure riding, with no real specific rider profile. Zuma riders are traditionally a very diverse group, skewed gender-wise at 28 percent female and 72 percent male, with the highest age groups being in the 30-34 age range, topped by the 50-54 age group. Twelve percent are under 16 years of age and two percent are over age 70. How?s that for a broad reach? Average Household Income of Zuma riders is $46,003. And 56 percent have some level of college education. 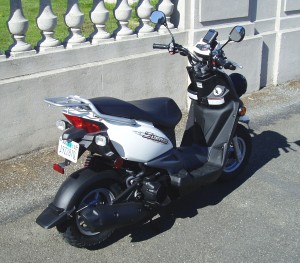 ?The Zuma 50F features a low center of gravity for great balance and sporty handling characteristics. The 1.2-gallon fuel tank is positioned low, in the center floorboard tunnel and the fuel thrifty scooter is capable of delivering 132 mpg. The locking under seat storage is large enough for a helmet (23-liters), but if

other gear consumes most of the space; there is an underseat post for hooking one?s helmet strap rings for security with the seat in its locked position. 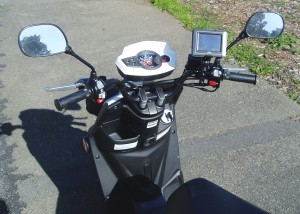 As already mentioned, the Zuma rides on fat knobby 120/90-10-inch tires front and rear, mounted on five-spoke alloy wheels. Suspension componentry consists of telescopic forks up front and left-side single coil-over shock and swingarm in the rear. Braking chores are handled by a single, left-side disc up front and drum in the rear. Finished in red are the front brake caliper, front inner brake disc and rear shock spring. Other styling details include the clear front and rear turn signal lenses. Exterior color choices include: Team Yamaha Blue; Alpine White; and Raven.

SUMMARY: ?The Yamaha Zuma 50F launch team concocted a photo ?scavenger hunt? that took in ten of San Fransisco?s most notable landmarks and tourist attractions, all preloaded with City Navigator? into the Garmin ZUMO 220 nav system with voice-prompted, turn-by-turn directions to aid in locating the points of interest. Moto-journalists were encouraged to photograph their scooters at each location, in no particular order with an Olympus PEN E-PM1 camera provided to participate in a contest, with the winning photographer to receive their own Garmin Zumo 220. A Bell ?shorty? helmet was provided for each rider?s safety, while Oakley provided a bag for gear and sunglasses.

The Zuma 50F performed admirably, hauling my 230 pounds (not counting extra gear) up and down hills (Twin Peaks included, along with famed twisty brick-paved Lombard street) and through crowded city streets. The scooter did everything that it was supposed to do with little effort. The ride quality was most compliant and my 6-foot, 4-inch frame actually fit comfortably. 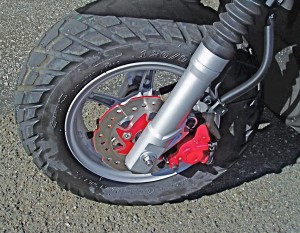 Acceleration seemed to be more than adequate, and the Zuma 50F proved to be highly maneuverable, even surviving an encounter with an intrusive automobile that drifted into my lane, bumping my Zuma in the process. The scooter and I remained upright with only a slight scratch on the scooter and tire mark on my pant leg. Even despite that negative incident, the Zuma 50F provided an exceptionally fun outing with very little fuel consumed during the entire day?s fifty plus mile run.

Yamaha offers a complete lineup of scooters, including a Zuma 125 priced at $3,350 should you desire a little more power, but the Zuma 50F did a yeoman?s job transporting oversized journalists about the city with seemingly little effort. Yamaha?s Extended Service is optionally available for up to four years of extended warranty coverage. ? available for all Yamaha street and scooter models.

Bottom-line, the 2012 Yamaha 50F represents an outstanding entry into the scooter world in a smart and stylish package. 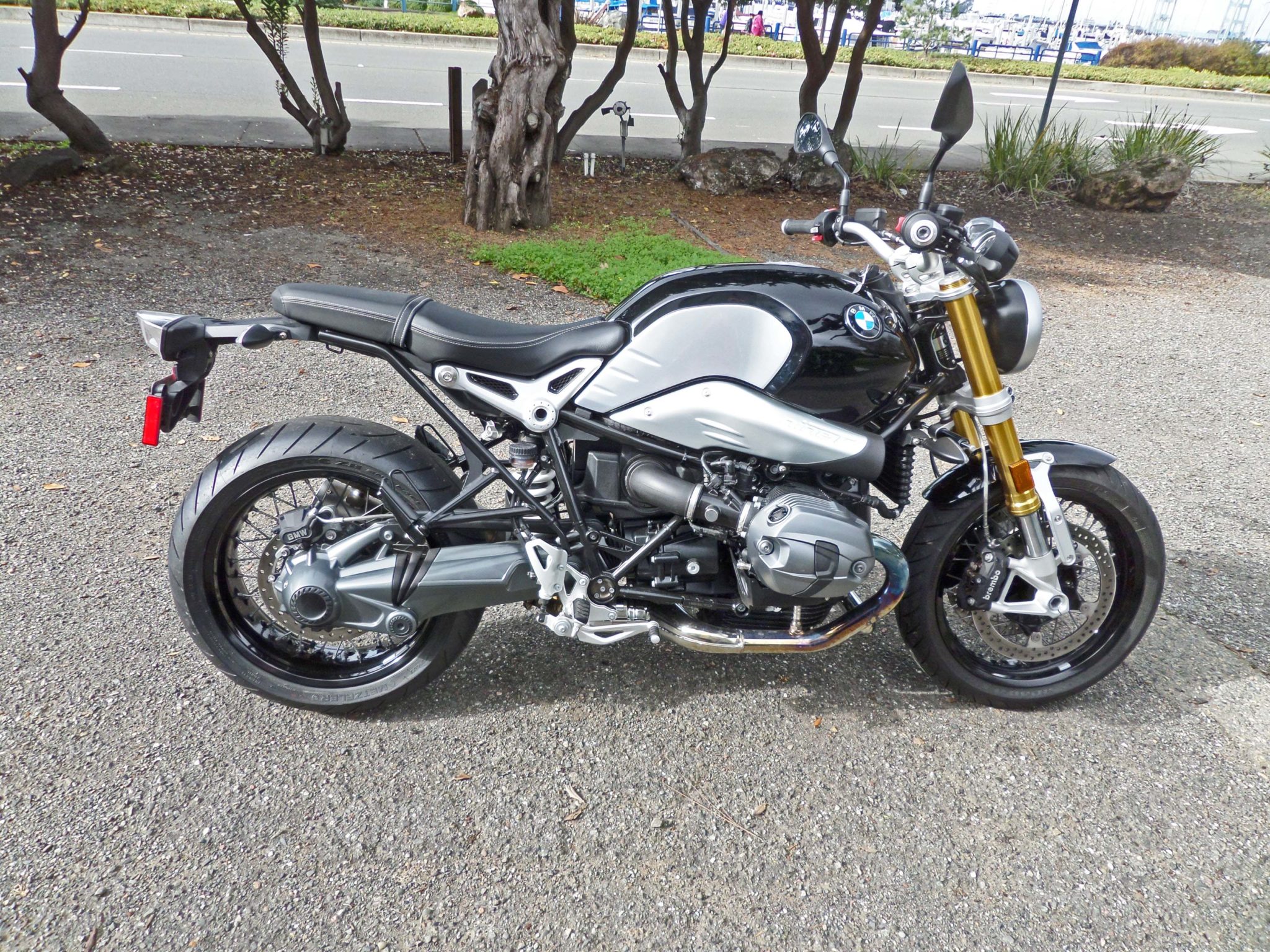 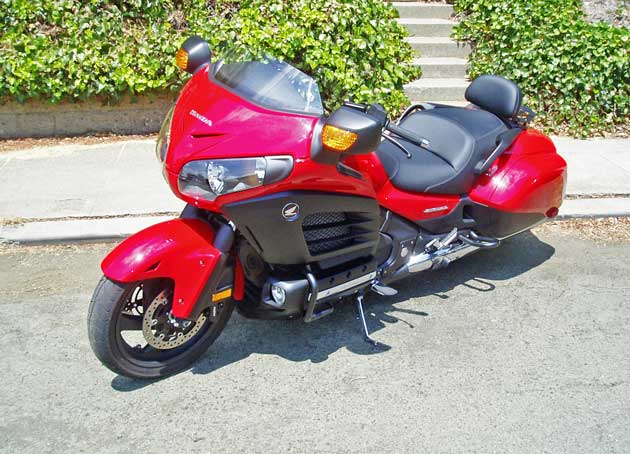