?The electric alternative to fun on two wheels? 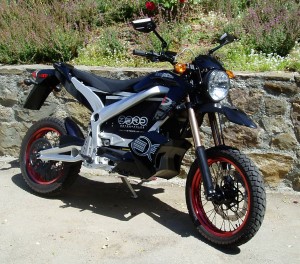 ?ZERO motorcycles was founded by Neal Saiki, who holds a masters degree in Aeronautical Engineering from Cal Poly in San Luis Obispo, and who formerly worked as a project manager at NASA developing high altitude research vehicles. Prior to that while in college, he set a World Aviation Record by creating the first successful human-powered helicopter. Saiki spent years designing award-winning, world-class mountain bikes for Santa Cruz Mountain Cycle.

The soft-spoken innovator introduced the first ZERO electric motorcycle prototypes in 2006, and from there went on to develop the 2008 ZERO X model, which was designed primarily for off-road use. Next came the street version ZERO S, which bowed as a 2009 model. Now, the Scotts Valley, CA-based company offers five different ZERO electric motorcycle models, including: the ZERO S street version; the ZERO DS dual sport model; a ZERO XU urban cross bike; the ZERO X trail bike; and the ZERO MX electric motocross machine. Both the ZERO X and ZERO MX may be ordered as strictly a dirt model or as a street legal model. 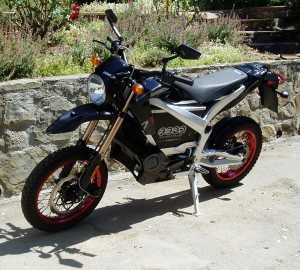 ?Each ZERO electric bike is designed and tuned specifically for its intended designated use. Power for all comes from a high efficiency, forced air-cooled, DC Axial Flux Permanent Magnet motor that draws it energy from varying capacity Z-Force? patented Lithium-Ion Intelligent Power Pack batteries. Normal recharge times vary based upon capacity ? ranging from two to four hours, with a life expectancy of from 34,000 to 70,000 miles. Some models feature integrated charging while others offer stand-alone charging systems. Optional quick charge units are available that cut the required recharge time frame roughly in half. Charging may be accomplished via either standard 110V or 220V outlets. Typical recharge costs will be from $0.21 to $0.48

Wheelbases, overall lengths, seat heights and suspension travel vary from model to model. The frames, which are all constructed of aircraft grade aluminum, vary in weight across the model lineup. Tire sizes and types also vary by model. 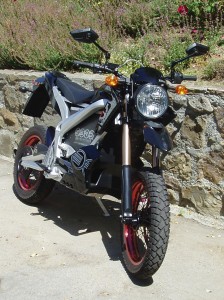 All final drives are chain on specifically sized sprockets per model, except the ZERO S and ZERO DS which delivers motive force to the rear wheel from the electric motor via a Poly Chain?/GT? Carbon? belt (the DS also offers an optional accessory drive chain). Top speeds range from 51 mph to 67 mph,?range is from 30 miles to 58 miles except for ZERO X and ZERO MX models, which measure their range in terms of time ? 30 to 60 minutes. Curb weights range from 201 pounds to 297 pounds.

I had previously tested both the ZERO X and ZERO S models (?08 and ?09 models respectively), but current year models of both have progressed significantly in terms of both setup and capability.

My test ZERO this time around was the 2011 ZERO DS Dual Sport, which blends innovation and riding passion, while delivering optimum versatility. It was designed to perform with agility in the dirt and to be quick on the street as well. My test bike was finished in Black and Silver with Red anodized rims and lace spoke wheels. The base price was set at $10,495 but with the 10 percent federal tax credit that?s available, the cost is reduced to $9,495. An optional Quick Charge system is available for $595. And, the standard Corbin seat with a height of 35.8-inches may be replaced by an optional lower height seat (33.8-inches) for $299. 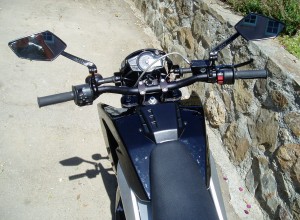 SUMMARY: Of the entire ZERO lineup, the ZERO DS Dual Sport would be my pick of the litter. Yes, it is the most expensive model and the heaviest, but it is also perhaps the most versatile. My test bike featured the integrated charging system and higher seat height.

Suspension travel amounted to 9.4-inches in the front and 7.7-inches in the rear for an exceptionally compliant ride quality on or off-road. The maximum battery capacity was 4.4 kWh, while the nominal capacity amounted to 3.9kWh. Maximum range was projected at 58 miles, which will naturally vary based upon riding style, terrain and surface. Top speed was 67 mph. Total recharge with the standard integrated system was roughly four hours. The wheelbase of my DS model tester measured 56.3-inches, and it weighed in at 297 pounds.

All ZERO bikes feature a clutchless, single speed, direct drive transmission. There is no fuel and there are no direct emissions. There?s also virtually no noise?to annoy neighbors and nearby residents. The battery possesses no toxic chemical properties and is recyclable.

The ZERO DS features a locking front fork assembly and an ignition key. Simply turn on the ignition key, press the power button, and you?re ready to roll. There?s no longer a variable capacitor switch. The ZERO DS ranks right up there with a conventional gas-fueled 250 cc machine in terms of performance capability.

The bike will not move with the side stand down with a warning flashing in the gauge cluster. When the charge is depleted down to two bars, the bars as well as a fuel pump icon flashes. I managed to achieve nearly a 50 mile range on a single charge, even with a lot of hills and heavy acceleration while riding. There is both an analog and digital speedometer with a total odometer and two trip odos along with the bar charge guage. The turn signal do not self cancel, and the bike is so quiet that extra caution must be exercised when riding. 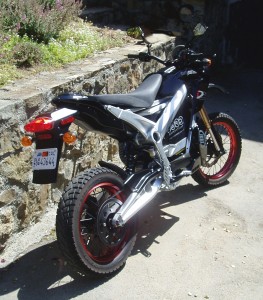 The ZERO DS is a pleasure to ride, which draws looks of bewilderment due to its silent operation. It enables one to bypass the ordinary and to take charge ? literally. This is truly a case where zero doesn?t translate as nothing ? it is genuinely a big plus. ZERO Motorcycles are available through a global network of local dealers, so should you happen to be a biker, as in the motorized kind, and if you?re also an environmentalist at heart ZERO Motorcycles offers a viable alternative in a variety of forms suited to individual use.