A Bagger that cowboys up in traditional fashion 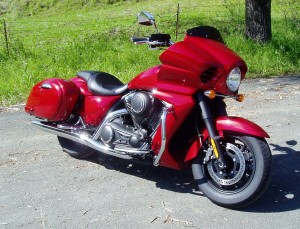 A couple of years ago, Kawasaki introduced the monstrous Vulcan 2000 as a heavy cruiser ? emphasis on heavy. It came with a tall saddle and very short side stand, which made it exceedingly difficult, if not impossible to raise to a level riding position for those who happened to be on the vertically challenged side. Once moving, it was a dream on the road ? in low speed maneuvering, not so much.

Now the Vulcan 2000 line has been put on hold in favor of the Vulcan 1700 stable, which boasts Kawasaki?s first traditionally styled production bagger, filling the cruising bill for old school enthusiasts, but with modern twists and conveniences galore. It?s the new 2011 Vulcan 1700 Vaquero. 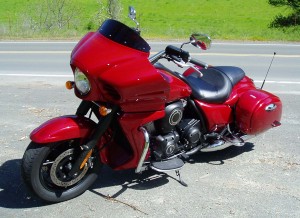 The name Vaquero refers to an ages old, Latino version of the American cowboy of the Old West, which would come along much later. Vaqueros were noted for their skilled horsemanship and expert craftsmanship of riding gear, hence Kawasaki?s appropriate moniker for their new touring cruiser.

The 2011 Vulcan 1700 Vaquero may well be the ultimate model for long solo rides, even though it is equipped with a minimal seat area and pegs for the occasional passenger.

Power for the Vaquero comes from a 1700cc (103.7 ci) four-stroke, liquid-cooled SOHC, 8-valve, 52-degree V-Twin with cooling fins that puts out 108 pound feet of torque at 2,750 rpm. Exhaust exits through dual pipes ? one per side, emitting a pleasant V-Twin rumble. The power reaches the rear wheel via a final drive belt through a six-speed manual gearbox with overdrive and a positive neutral finder. Though smooth through all gears and a broad torque range, the 1700 V-Twin seems happiest when revving above 2,500 rpm. 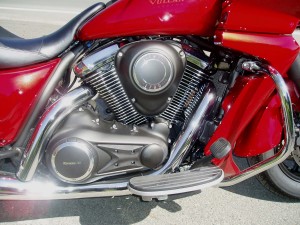 The Vaquero rolls on 9-spoke cast alloy wheels shod with Bridgestone rubber ? 130/90×16 up front and 170/70×16 aft. Suspension consists of 45mm hydraulic front forks with 5.5-inches of travel and a rear swingarm setup with twin air-assisted, adjustable shocks and 4-way rebound damping? with 3.1-inches of wheel ??????????? travel. Braking duties are handled by front dual 300mm discs with twin-piston calipers and a single 300mm rear disc also with a twin-piston caliper.

In terms of its eye appeal, the Vulcan 1700 Vaquero displays a streetwise, low-slung styling that features a frame-mounted, muscularly shaped front cowling and lower chin fairing. Fairing. The cowling lines flow synonymously with the graceful arch of the 5.5 gallon fuel tank ? it houses a single headlight and no auxiliary lamps, but rather louver-style foglamp covers, which may be replaced by accessory lamps. The cowling is topped by a minimalist smoked windscreen that is really nothing more than a simple deflector. The rear side covers flow into the rear fender, which is flanked by a streamlined, hard, lockable, side opening bag on each side that follows the curve of the rear fender. Case bars (or crash bars) protect the running gear front and rear on each side. 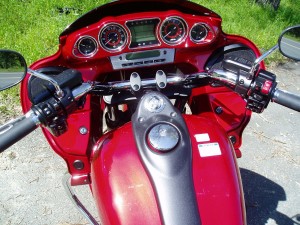 Functionality and convenience are paramount in the Vaquero bagger, with the front cowling containing a full feature, high fidelity audio system with AM/FM and Weather radio, which may be accessorized with iPod players, XM radio and CB radios. There are locking storage compartments on each side. The dashboard, which Kawasaki refers to as being ?musclecar? inspired displays LCD instrumentation that provides all essential operating information for the rider. There is a central information display that shows a total odometer reading, two trip meters, average fuel consumption and range, and a gear indicator as well as a bold green Neutral light. It is flanked by a large round analog speedometer on the left and round tachometer on the right which are in turn flanked by a smaller round engine temperature gauge on the right, and round fuel gauge on the left. The audio system readout appears horizontally beneath the instrument panel. Handlebar controls include toggle switches for audio control on the left and electronic Cruise Control switches on the right along with traditional engine operation functions. The ignition, accessory and locking switch is located in a central console atop the fuel tank, which also holds the locking fuel filler cap.

My test 2011 Kawasaki Vulcan 1700 Vaquero came finished in Candy Fire Red metallic (one of only two colors ? the other being Ebony). The base price was set at $16,499, while the final sticker came to an estimated $16,799 based on a $300 dealer prep and handling charge, which may from dealer to dealer.

SUMMARY: Kawasaki?s first production bagger should prove to be a winner ? it looks great, with a traditional design flair that doesn?t come across as a Harley clone. It showcases popular bagger cues, but with modern, up-to-date touches, and even though it is appealing in its showroom stock form, it can still lend itself to personalizing or customizing with a host of available accessories.

The one-piece seat will prove to be a tad on the tall side for vertically challenged riders when stopped or when attempting to get the bike off of its relatively short side stand, but once aboard and underway, the boards, foot controls and handlebars are well placed for optimum riding comfort, and hand controls and switches are easily operated with gloves on.

Acceleration is both smooth and instantaneous, with a quick off-the-line response, while gear changes are exceptionally smooth. The torque range is broad and the gearing relatively tall, affording comfortable shift points. The ride quality is on the firm side, but compliant enough to avoid fatigue on longer jaunts ? note that I didn?t fool with adjusting the damping.

The bike weighs in at 835 pounds ready to ride, so it?s certainly no lightweight. It is highly maneuverable at road speed, but more of a chore at a parking lot pace. It?s possible to touch down the boards with some effort, but not advisable to push the envelope, because going beyond the law of physics will likely result in going horizontal. Riding with company is recommended if you plan to play sport bike with this hefty bagger, because if you do lay it down, you?re probably going to need help to upright it. A plus though, there is a fuel and ignition shut off to aid in avoiding further excitement should you lose control. Restarting requires physically shutting off the ignition first. 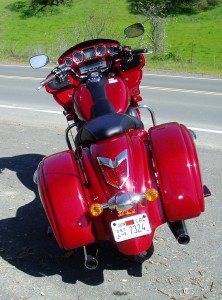 The seat?s foam density is ideal for long range comfort and the upright riding position is equally ideal, with the foot controls within easy reach. I managed to average nearly 35? mpg on a short 120 mile ride that included both city and highway miles over hill and dale. Considerably more is possible with less exuberant throttle roll.

Bottom-line, the 2011 Kawasaki Vulcan 1700 Vaquero is a delight to ride and a welcome addition to the Vulcan 1700 stable, which will definitely allow the rider to ?cowboy up? (make that Vaquero up). 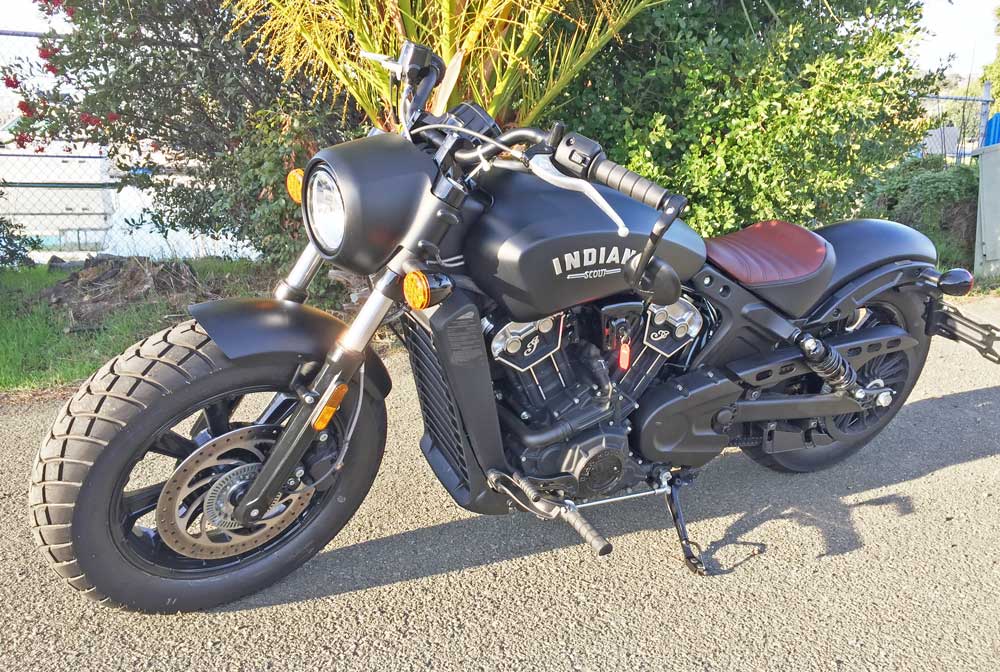