Polaris Industries celebrated the 10th Anniversary of their Victory motorcycle division three years ago and embarked upon their second decade of production of ?The New American Motorcycle?, making significant changes to their 2009 lineup of bikes in both the cruiser and touring categories. 2010 saw the addition of two new touring models ? the Victory Cross Roads and Victory Cross Country along with the enhancements made to the rest of their stable. All of Victory?s motorcycles, regardless of the category that they happen to fall into, tend to fill the bill as highly customized turn-key units right off the showroom floor.

For the past couple of years, Victory called upon custom bike guru, Arlen ness, who is also a Victory dealer to produce limited signature series editions of select bikes. As it turns out, Arlen?s son Cory and grandson (Cory?s son) Zach are also involved in both the family business and in the design of custom designed special edition bikes. The Ness clan members are the real deal in the world of custom bikes unlike a certain New York based dysfunctional constantly feuding tribe.

For the 2011 model year as part of the highly specialized ride project, patriarch, Arlen Ness has chosen the Vision Tour as his 2011 custom palette, while son Cory selected the Cross Country to make over, and Grandson Zach picked a? Vegas model to customize. Each specific Ness model is numbered and signed by its creator, and features unique physical touches, custom paint and graphics and stylized wheels. My mission here is to serve up reviews of the three custom bikes from ?A? to ?Z?, but not necessarily in order. In fact, I reviewed the Cory Ness Cross Country first, and this article deals with the Arlen bike. Zach?s bike will follow in the not-too-distant future. 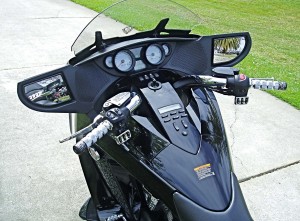 A center character line runs the entire length of the bike from the front composite fender, through? the headlamp and fuel tank, and continues through the rear fender to the stylized ?V? taillight and running light with a chrome trimmed ?V? rear directional light assembly. The streamlined, extended tank also features a distinctive side sculpting, as do the contoured, composite, lockable hard side bags and combination trunk/passenger seat back. The fuel filler is hidden in a locking compartment to the right of the centerline, with a matching, non-locking storage compartment on the left side of the uncluttered tank top. 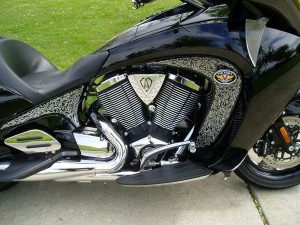 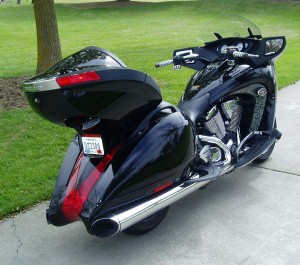 Victory has chosen to power all of the 2011 model bikes with their 106 Freedom V-Twin – 1,731cc (106 ci) 4-stroke 50-degree SOHC, 8-valve Freedom V-Twin with electronic fuel injection, dual 45mm throttle body and split dual exhaust with crossover. The motor, is mated to an improved and enhanced six-speed constant mesh overdrive transmission, that?s capable of cranking out up to 97 horsepower, along with 113 pound feet of torque.

The upscale Victory Vision Tour is exceptionally pleasing to the eye even in its base form, which to many comes across to many as too futuristic or radical in appearance than traditional cruisers.

My latest test Victory was the 2011 Arlen Ness Edition Vision Tour model. The base sticker was set at $27,999. ($3,000 more than Cory?s custom bike). Add roughly $450 for California emissions and dealer prep and handling.

SUMMARY: The 2011 Victory Vision Tour Arlen Ness edition displays an emotional and dramatically pleasing visual presence, with aerodynamic styling cues. All the angles and contours flow harmoniously, with the 106 cubic inch motor showcased in the frame as a jewel-like focal point. The motor not only looks good, it hauls the mail effortlessly. If there?s a downside, it would be that the stock exhaust note, which serves up a low thrum, would benefit from a little more thunder. On the plus side of that issue, which is personal, it?s much less likely to offend neighbors when firing it up. 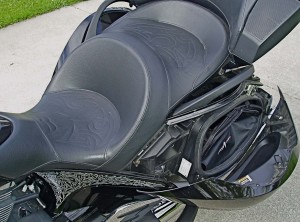 The riding position is extremely comfortable and despite the big bike?s overall mass, it is exceptionally well-balanced. The Ness Vision Tour is, as its name implies, a touring machine where everything works well from the handlebar and floorboard positioning to the well-padded seat that provides lumbar support for long hauls. The suspension travel smooths out rough road surfaces for more pleasant riding conditions. The modified six-speed gearbox is both smooth and relatively quiet. There?s plenty of power on tap with a very broad torque range for when you?re in the mood to minimize shifting gears.

The complete audio system is noteworthy and easy to operate with gloves on, the cruise control makes riding over long distances less tiresome and the frame extrusions on each side of the bike catches it, preventing it from going completely horizontal and saving on costly repairs.

In the final analysis, Victory?s new 2011 Vision Tour Arlen Ness edition provides a custom touring bike for those long hauls right off the showroom floor in a lineup that offers a wide selection of models that has something to satisfy nearly every rider in the Cruising and Touring categories.

Polaris has now acquired Indian motorcycles, which will extend that brand?s long-lived heritage and expand their motorcycle offerings with Indian?s classic and iconic styling. 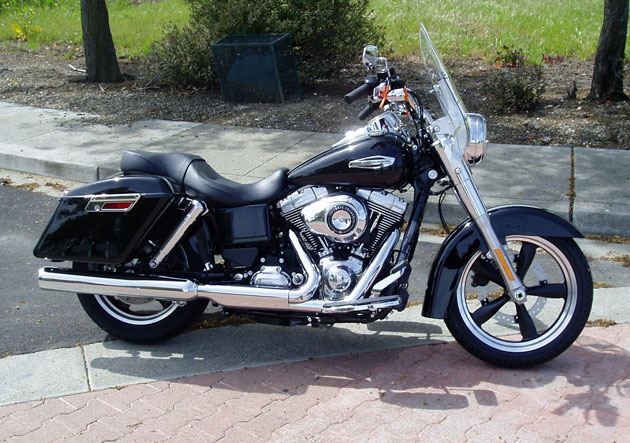