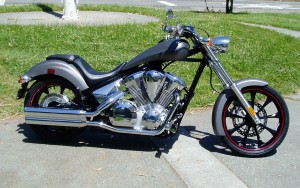 Honda has stepped over the line to the wilder side of motorcycling, proving beyond a reasonable doubt, that imitation is indeed the sincerest form of flattery. But true to Honda?s modus operandi, they have not rushed into the chopper genre blindly; they rather have done their homework to ensure that their entry would be imminently successful. Other metric bike manufacturers have already tossed their hat in the ring of the minimalist bike movement with examples that fall generically into the custom chopper category ? take for example Harley-Davidson?s recent Rocker series and Yamaha?s Star Raider models.

Genuine choppers from the late 50s, 60s and early 70s were cool and rebellious in their day ? at least visually. Riding one for any length of time or over a long distance proved them to be not so cool however. In fact, I?m not sure how Peter Fonda and Dennis Hopper survived until the end of their iconic biker movie. Riding is supposed to be about freedom and individual expression, and the jury has it that that early choppers failed to fill the bill with any real credibility ? okay, maybe the individual expression part. 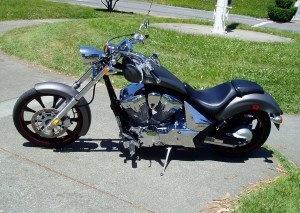 Fortunately, even today?s top ranked custom builders have progressed to some level of comfort and dependability. Manufacturers have recently stepped up to the plate, delivering practicality along with enhanced comfort and improved reliability. Early Choppers traditionally featured hot-rodded motors, a stretched and streamlined fuel tank, radically raked out front forks along with a tall, skinny front wheel and tire, a low seating position and a bobbed rear fender. The same factors are still in evidence today, and modern manufacturers, for the most part, adhere to the basic concepts of the breed, but with modern technology thrown in for good measure.

Honda?s entry into the Chopper market, no doubt came as a surprise to the cycling world, but the 2010 Honda Fury is definitely a worthwhile entry into the popular and growing category. It is one pretty cool ride, right off the dealer?s showroom floor, and the price is certainly more reasonable than a custom creation from the likes of Arlen Ness, Jesse James or the dysfunctional family that makes up the Orange County Chopper team.?

The Fury comes with all the important basic elements ?featuring raked-out front forks flanking a tall multi-spoked alloy wheel and narrow rubber capped by?a closely fitting, abbreviated cycle fender. The frame is visibly evident, supporting a flashy, chrome motor and all of the accompanying mechanical elements. The gas tank is not only stretched and streamlined, but sculpted as well, flowing into the long, low and narrow seat with its kick-up passenger pillion and strap handle. The rear fender displays a bobbed effect, and the low, pull back handlebars and forward controls are set up for an ?Easy Rider? posture. The dual right side twin exhaust pipes emit a required, pleasing V-Twin rumble. Some not-so-traditional elements include: the cooling radiator and final shaft drive, which early chopper examples certainly wouldn?t have been caught dead with, but we?re talking progress here. 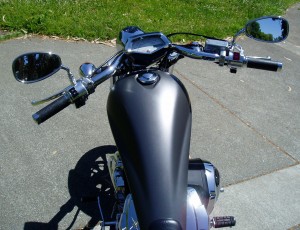 ?Power for the 2010 Honda Fury comes from a 1312cc SOHC, 6-valve, liquid-cooled 52? V-twin motor with PGM-Fuel Injection and automatic enricher circuit with one 38mm throttle body. The motor makes 56 horsepower @ 4,300 rpm, and 71.6 pound feet of torque @ 3,300 rpm. As already stated, the power reaches the rear wheel via a shaft final drive, and gear changes are made courtesy of a smooth, five-speed sequential manual transmission.

Suspension componentry consists of 45mm inverted forks with 4.0-inches of travel up front and a single shock with adjustable rebound damping and five-position spring preload adjustability and 3.7-inches of travel in the rear. The Fury rides on Dunlop Elite 3 90/90-21 front? and a fat 200/50-18 rear rubber, mounted on 9- spoke, black powder-coated alloy wheels. Bringing the Fury to a halt is a single 336mm disc with twin-piston caliper forward and a single 296mm disc with single-piston caliper. An optional ABS system and Combined Braking System model is available for an extra $1,000. The Fury is capable of moving from 0-60 mph in 5.3 seconds and tops out in the speed department at 100 mph.

Early real choppers incorporated modified parts that were mostly steel, while the front and rear fenders, valve covers, some of the engine covers and headlamp bucket of the Fury are made of plastic, most items in chrome, which may go against the grain of many purists of the chopper movement.?

My test 2010 Honda Fury wore a flat or satin finish exterior of Graphite metallic with lots of chrome and a Black seat. The base price was set at $12,999 while dealer prep and handling adds an average estimated $250.?

SUMMARY:? The 2010 Honda Fury is a slick ride that fulfills the chopper image at an affordable price in its stick form. There are several factory optional accessories available for personalization, which when totaled up, still come in at considerably less than a full-on custom.

I found the Fury to be a pleasant, fun-to-ride, custom-looking, chopper styled bike. The cost falls into the reasonable range for such a unique-looking bike, especially given Honda?s reputation for fit, finish and reliability. Pegs are provided for both ride and passenger.?

The Fury feels lighter than its 663 pounds, and the low 26.7-inch seat height makes it user friendly, even for vertically challenged riders. At 6?4?, I felt comfortable and quite at home aboard, with an almost perfect riding position.

The Fury is nimble and easily maneuverable in virtually any riding scenario. The acceleration is quick and responsive ? it?s not a drag bike, mind you, but the shaft drive results in an instant response to the throttle. The balance is neutral, with a totally balanced feeling either at speed or a slow, parking lot pace.

There are a few visual nits to pick ? the metal tank could be mounted a tad lower for a more custom fit, and the rear fender cut line would perhaps be even more appealing if it followed the real tire profile more closely, and finally, the front suspension travel could be increased for a non-springer-like ride. The Fury comes without a windshield (and appropriately so, since no self-respecting chopper ever had a windshield). There?s a helmet lock for security if you want to leave it with the bike.?

On the plus side, the gauges are simple, informative and easy to read, the seat is comfortable and the Fury delivers a stable and positive riding experience, with smooth gear changes and while it may not have the hottest motor available, it certainly seems more than simply sufficient. Bottom line, if the metal versus plastic content were to be increased, so likely, would the overall chopper appeal be elevated. Come to think of it, plastic is lighter and cheaper to replace.