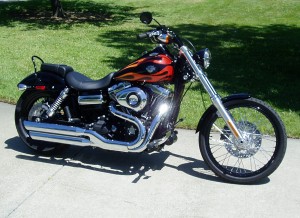 Looking for a bike executed in ?Old School? style right off the showroom floor? If so, then the 2010 Harley-Davidson FXDWG Wide Glide from the Dyna? family may be just what you?re looking for. The latest? version Wide Glide hearkens back to the factory-custom movement of the -70s, blending Big Twin performance with a stretched out, lowered stance. The foot controls are positioned far forward, with low, pulled back drag-style handlebars, featuring internal wiring mounted on black four-inch high risers with black mirrors and headlamp bucket matching the risers. The battery box and rear fender struts are finished in wrinkle black powdercoat, with a chrome strip on the battery box sporting an embossed ?Wide Glide? logo. The extended front end placing the rider in a typical? ?bad to the bone? profile. 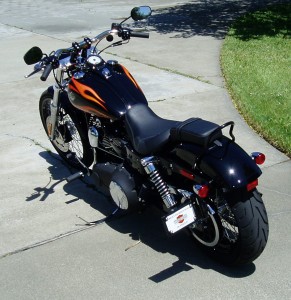 Getting back to the bike?s looks, it comes with a fat, chopped rear fender and small, close fitting, genuine cycle front fender. The rear mud guard is kept clean by the combined LED stop/turn/and taillight unit and folding, left side license plate. The rider?s seat is a low 25.5-inches, followed by a kicked up passenger pillion and stylized black, one-piece wire ?sissy-bar?. The motor and case are black powder-coated with machined, bright cylinder fins, and just the right amount of chrome accents including rocker and derby covers. 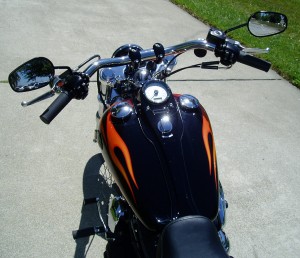 This old-school-style Dyna rolls on Harley-Davidson Dunlop Sport rubber mounted on 40-spoke laced wheels with black steel rims ? GT 502F-80/90-21 54V up front and GT 502- 180/60B 17 75V in the rear. The 48mm inverted front forks with dual rate springs are raked out to 34 degrees, with wide, polished aluminum triple clamps creating more space between the forks, opening up the front-end styling, and accentuating the 21×2.15-inch front wheel. The rear swingarm is damped by coil-over shocks, flanking the chopped rear fender that exposes the fat rear tire. Braking is handled by dual discs forward and a single disc aft.

My test Dyna Wide-Glide was provided by Harley-Davidson of Vallejo, CA and came in the Vivid Black with Faded Flame paint treatment. The base price was set at $15,194. With the as tested sticker totaling $16,299.

SUMMARY: The new 2010 Harley-Davidson Dyna Wide Glide is unquestionably a slick, retro- looking, chopper-style bike that comes with modern technology and reliability. The 96-inch motor delivers plenty of torque through all six gears ? so much so, that the throttle tends to be a little ?surgey? on the low end. The clutch was initially a little sticky too, as the bike was brand new, with virtually no miles on the odo. That having been said, even without adjustment, the bike is an incredibly cool ride that nearly causes ?flashbacks? to an earlier era. It is so low, that it was necessary to lean the bike to starboard (that?s to the right for landlubbers) in order to clear the sidestand. 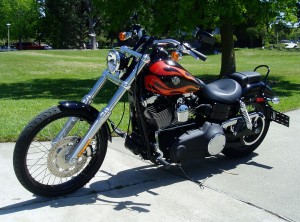 The FXDWG Wide Glide Dyna is well balanced and delivers a comfortable ride with chopper-like attributes. Slow speed maneuvering make take a little getting used to for those not accustomed to riding a bike with a fat rear tire and a raked-out skinny 21-incher up front. The Wide Glide is capable of taking one back to nostalgia-land without any of the inconveniences. For some of us, Old-School rules ? for others, who are not in tune with retro, there are five other models in the Dyna family to choose from, each with their own flavor and appeal. 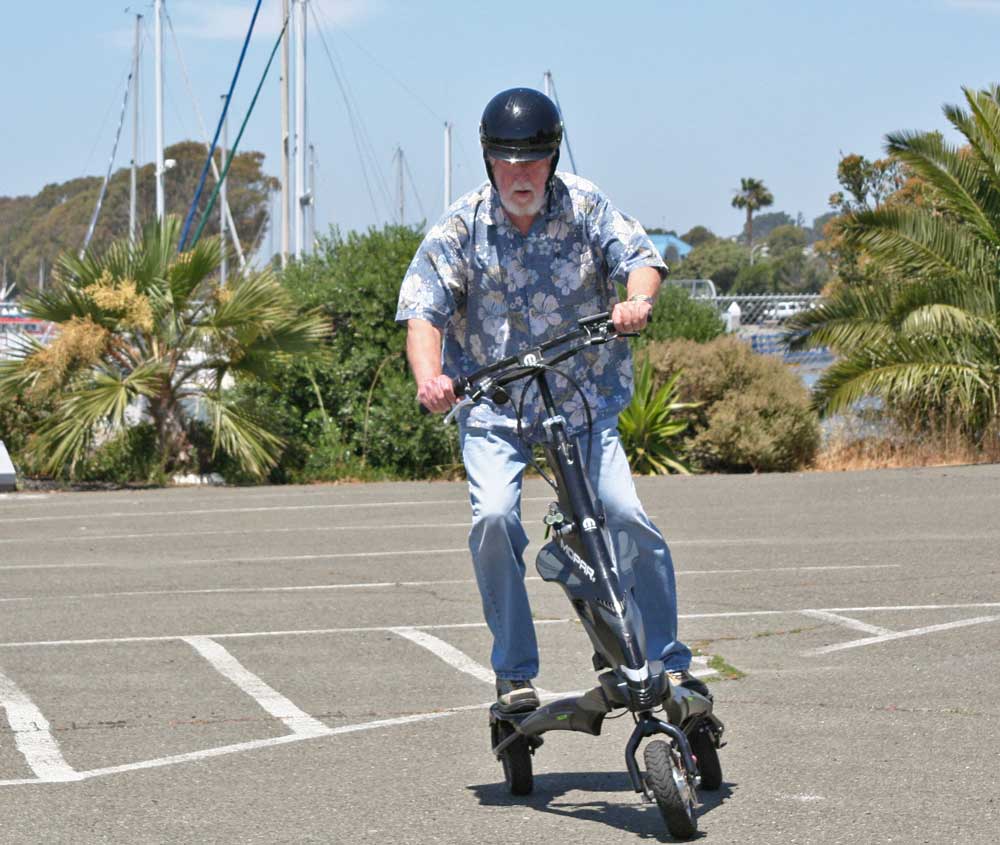