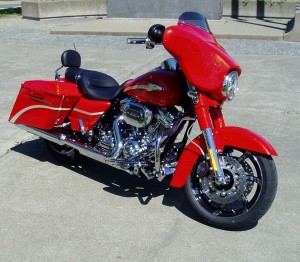 Every year, Harley-Davidson?s Custom Vehicle Operations team selects a number of bikes from its various family groupings to ?make-over? as special factory-custom rides. For 2010, there were four bikes chosen to receive the unique CVO? treatment: two of which are totally new models ? the Softaill Convertible CVO and the Touring group?s Street Glide CVO. The other two are freshened or updated models ? the Fat Bob CVO from the Dyna family, and the CVO Ultra Classic Electra Glide.?

In past year?s, the CVO tradition was not only to feature additional power and performance, but to pile on what seemed to be tons of extra flash and bling. For this year?s chosen models, a somewhat different direction was adopted ? rather than trick out each model to the max, just because they could, the team decided to play down the bling factor, and to focus on what might be considered a more tasteful approach pretty much across the board. One noticeable exception is the Tequila Sunrise paint treatment found on the new CVO Street Glide ? it requires wearing shades to behold with its bright, blinding, heavy gold metal-flake orange finish and genuine gold leaf graphics. In fact, that?s the model to be reviewed here. Production will be limited to roughly 3,500 and by the way, if Tequila Sunrise is too flashy for you, there?s Candy Concord or Spiced Rum to choose from, but both still feature the bold gold leaf graphics. 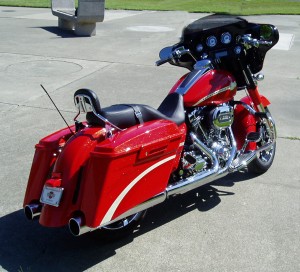 The CVO Street Glide is built on the innovative Touring chassis introduced by Harley-Davidson last year, which is based on a single-spar, rigid backbone frame and a new swingarm developed to withstand the demands of long-haul touring riders and today’s more-powerful engines.

And, speaking of power, the Custom Vehicle Operation?s (CVO?) FLHXSE Street Glide? is powered by an 1803cc (110 Cu.-in.)Twin-cam 110B?, air-cooled V-Twin balanced motor with a granite finish, featuring electronic sequential port fuel injection. The motor cranks out an impressive 110 pound feet of torque @ 3,000 rpm, fed by a free-flowing heavy breather forced-air intake. The gearbox is a sequential six-speed Cruise Drive manual unit that is exceptionally smooth, moving up or down through the gears. Power reaches the rear wheel via a fiber-reinforced belt. Exhaust exits from split dual pipes that emit a pleasingly traditional and throaty Harley rumble that?s more pronounced than a stock bike.?

?My test bike was provided courtesy of my local Harley-Davidson dealer and was absolutely stunning with Tequila Sunrise custom paint treatment and bold gold leaf graphics. The base price was set at $30,999. with the out-the-door sticker totaling $31,579.

The 110-inch V-Twin motor delivers smooth power across its total range and gear changes are velvety smooth. The riding position, with its low seat height and mid-located foot controls, along with the ideally placed handlebars, is very comfortable and makes it a joy to use up the contents of the long-range six-gallon fuel tank.? 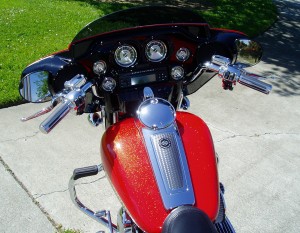 The only possible negative issues have to do with the reflection from the exceptionally bright paint, and the “shorty” windscreen, which can direct the wind into the face of taller riders. The fork-mounted fairing?s weight is noticeable during really low speed maneuvering.

In the final analysis? if you?ve got the green, this is the machine ? the new CVO Street Glide comes with plenty of custom features and stands out from the crowd without doing anything to it at all.