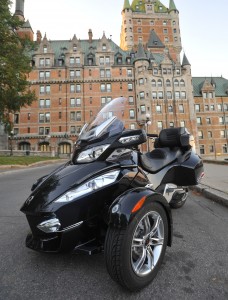 What is BRP?s Can-Am Spyder?? Is it a motorcycle? No. Is it a trike? Guess again ? trikes have three wheels, but their two wheels are in the rear, rather than up front as on the Spyder. Is it a Roadster? Well, though BRP refers to the Spyder as a Roadster, it doesn?t come across to everyone as a roadster in the traditional sense. All hot rodders know that roadsters are souped up, two passenger, open cars that you sit IN. The Spyder accommodates two comfortably as well, but you sit ON it. BRP, by the way stands for Bombardier Recreational Products, now a privately held company that no longer has anything to do with jet aircraft or trains. A motorcycle license is required to operate the Spyder in all states except California and Delaware, where only a valid motor vehicle license is required.

?The three-wheeled Can-Am Spyder Roadster, which first appeared on the scene in 2007, is in reality, a little bit roadster and part convertible sports car. To some, it will come across as a motorcycle, at least in spirit and concept. To others it will be referred to as a trike, which it isn?t. As already stated, the Spyder comes with its two wheels forward and the single wheel trailing aft which acts as the drive wheel — a traditional trike positions one up front and two wheels in the rear as its driving wheels. The Roadster moniker refers to the Spyder?s open air driving position and car-like stability features. In terms of a more general interpretation, if the vehicle is straddled over, it?s a motorcycle, whereas sitting in the vehicle renders it an automobile, with applicable rules and regulations applying respectively.

According to Marc Lacroix, BRP Can-Am Spyder Roadster Director of Marketing, ?BRP has always been a company focused on initiating innovative paradigm shifts, notably sit-down vs. standup personal watercraft (Sea-Doo), and the snowmobile (Ski-Doo) vs. dog sled.? Lacroix pointed out that the vehicle?s purpose was to override (no pun intended) many potential consumer?s negative feelings or objections toward traditional two-wheeled transportation. Vehicle stability, or the lack thereof, characteristic of conventional motorcycles isn?t an issue with three wheels planted on the ground. Riding skills are easier to master with three wheels rather than two, and safety technology is far superior. Licensing is easier than for a motorcycle where necessary, and comfort, affordability and practicality are other factors inherent with the Spyder when compared to a sports car. 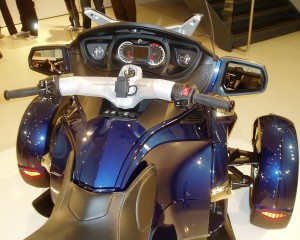 Power for the Can-Am Spyder Roadster comes from a Rotax 991 cc, DOHC, 8-valve V-Twin, liquid-cooled motor, with electronic multi-point fuel injection. Exhaust is two-into-one, with a catalytic converter. The motor mates to either a sequential five-speed manual (SM5), or an optional, electronically controlled, clutchless five-speed semi-automatic (SE5), which still requires shifting up through the gears. Both transmissions feature a full mechanical, transmission-based reverse interlock. The Spyder?s final drive force reaches the rear wheel via a carbon-reinforced belt. The Rotax motor now generates 100 horsepower (6 less than earlier models) but develops more pound feet of torque (80 lb.-ft). The Can-Am Spyder Roadster runs on regular fuel and can travel from 0-60 mph somewhere north of 5 seconds, with a top speed determined by load, but pushing over 90 mph. pretty respectable for a craft that tips the scales at 929 pounds dry.

The unique 991cc Rotax motor mounts in a steel frame, utilizing Surrounding Spar Technology (SST), which contributes to its stability. The front suspension consists of a double A-arm with adjustable cam, anti-roll bar and 5.67-inches of travel, while the rear suspension features a single swing-arm with mono-shock, electronically adjustable cam with self-leveling and 5.71-inches of travel. The front wheels are not articulated and do not lean into turns, as do those found on Piaggio?s MP3 scooters. The tires? are produced by Kenda specifically for the Spyder? 14-inch in front and 15-inch for the rear, which mount on attractive three-double-spoke alloy wheels, with an optional 6-double-spoke design wheel available. There is no traditional hand brake on the Spyder ? instead, there?s a foot-actuated, fully integrated hydraulic 3-wheel braking system with dual discs forward and a single disc aft, handling halting the three-wheeler. Foot controls (brake and shifter) are mid-mounted on the manual gearbox version Spyder. Shifting gears on the automatic transmission equipped Spyders is accomplished by a toggle lever by the left-hand grip. Push forward to shift up, or pull back to shift down — sequential downshifts take place automatically when reducing speed. An optional handlebar riser is available to accommodate taller riders.?

The first iteration Can-Am Spyder model was called the GS which became the RS. Now, to answer the consumer demand for a touring oriented model, there is the new 2010 touring model RT, which comes in three? levels of trim: the base RT, available in Full Moon Silver only and starting at $20,999.; the RT Audio and Convenience model with a starting price of $22,999, available in Full Moon Silver and Orbital Blue; and the flagship RT-S with a base sticker of $24,999, available in Timeless Black metallic and Orbital Blue. The base or standard model is?equipped with a color screen and analog gauges, an electric windscreen, cruise control, Roadster electronic control center and luxury seating. The Audio and Convenience Package adds: AM/FM radio with NOAA weather, a jack for iPod and iPhone integration, dual analog gauges, and electric front hood release. The top-of-the-line RT-S models add to the above: adjustable rear suspension; auto-leveling; 7 pre-load settings, shifting indicator on color display; premium audio system; 2 additional speakers with passenger controls; 3.5mm audio and auxiliary jack; upgraded special edition trim; chrome accents; smoked chrome wheels; trunk liner and half cover; heated rider and passenger grips; and fog and LED accent lights.? 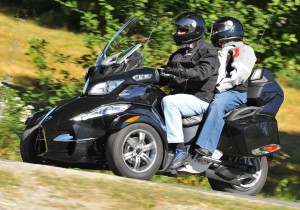 Confidence-building safety technologies include: an ABS anti-lock braking system; Electronic Brake Force Distribution; Traction Control System; Bosch version 8 Vehicle Stability System (the same used by Audi automobiles); and Stability Control System with roll-over mitigation. There?s even Dynamic Power Steering with variable assist. You certainly won?t find all those features on any? conventional two or three-wheeled ride. Incidentally, the systems cannot be turned off or overridden. There is even an instrument panel warning that appears?each time the ignition is turned on, that requires acknowledgement before one can begin riding.

The Can-Am Spyder RT Roadster?s styling and design is edgy, contemporary and futuristic all in one. It is radically different from everything else on the road. It doesn?t look like a motorcycle, car or trike ? it showcases a totally new look that?s all its own. It may best be described as a ?rider-active? vehicle with a large streamlined, watertight trunk located in the nose, combined with a rear trunk and integrated and damped side bags that may be opened with the passenger still comfortably seated.?

My test Spyder Roadster was an RT-S model with the manual transmission, finished in Timeless Black metallic. The base price was set at $24,999 with an estimated final price tag of $25,249. as equipped. Other options available for the RT-S Spyder Roadster include: the Sequential Electronic 5-speed with transmission-based reverse; a Garmin Zumo 660 GPS system with custom cradle, car mount and full Bluetooth integration; Citizen?s Band radio; XM radio and a ?killer? RT-622 Trailer, color-matched to the Spyder, priced at $4,000. With an available rubber damped, axle-mounted hitch with ?plug and play? wiring and automatic VSS calibration. The trailer includes a 22 cubic foot capacity with a 400 pound gross weight rating, fully independent coil over shocks, front and rear access hatches and matching design smaller wheels.? 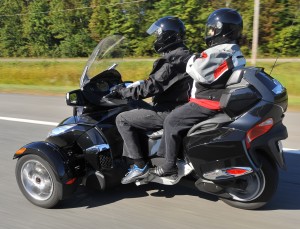 SUMMARY: ?The Can-Am Spyder RT-S Roadster definitely fills the bill for the bike touring crowd. BRP did their homework and loaded the RT lineup with just about everything to make a cross country trek practical and totally enjoyable. It even has an upgraded 650 watt magneto to handle the added electrical demands. The RT Spyder is 3-inches wider than the RS models, with bars pulled back and rider pegs set forward for an optimum riding position. Passengers are provided with height adjustable, folding floorboards, a plush backrest ample side bolsters and side hand grips.?

Non-bikers will have no problem learning to ride the Spyder Roadster — they may even have an advantage, with nothing to ?unlearn?. Experienced traditional bike riders on the other hand, will have some adapting to do. Counter-steering is out the window, there?s no hand brake and with the optional electronic shift version, there?s not even a clutch lever. Leaning into a turn isn?t really required, but may feel more comfortable. Another advantage offered by the Spyder, is that you don?t need to put a foot down when coming to a stop. The Spyder definitely feels different, especially in the steering department. Once the suspension is properly adjusted for the load, it?s nearly like driving a car. A suspension setting that?s too soft contributes to a ?twitchy? steering feel.?

The Can-Am Spyder RT-S Roadster represents a near perfect balance between performance and peace of mind, having been built to become a part of both rider and passenger and designed to set them apart from the status quo. The unique and innovative three-wheeler is quite comfortable, and should open the door to a simpler kind of ?wind-in-your-face? motoring for many who were put off before by the perceived potential hazards of two-wheeled cycling. It?s riding reinvented, and the Spyder is equally at home with a solo rider or two-up scenario. Total maximum load capacity is 525 pounds. The Can-Am Spyder RT-S is the ideal choice ride to finally escape on that cross-country adventure that you?ve long dreamed about.?

My wife and I joined several other moto-journalists and their significant others for a tour of the BRP Centre Design and Innovation and factory in Laurent, Beaudoin, Valcourt, Quebec, with a ride to Quebec City for an overnight stay and return ride the following day, covering roughly 250 miles of the beautiful Canadian countryside. The seating was so comfortable, that several of the passengers dozed off ? a testimonial to the Spyder?s security. Both rider and passenger have to dismount for refueling, as the filler is beneath the seat assembly, but hey, stretching can be a welcome departure, and the Can-Am Spyder isn?t equipped with a Porta-Potty. It seems to have everything else, could that be the next innovation from BRP for the Spyder Roadster? 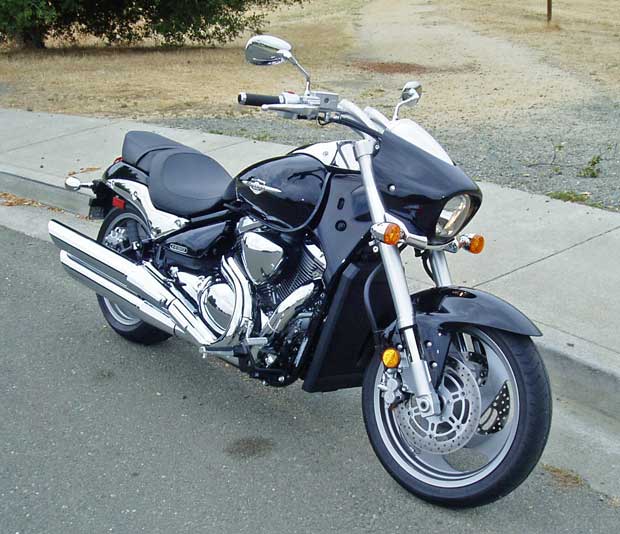