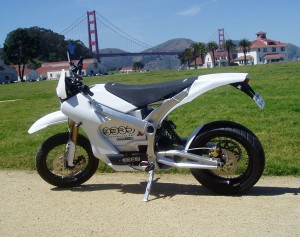 Should you happen to be a biker, as in the motorized kind and if you?re also an environmentalist at heart, there?s great news for you. Whether you like to get down and dirty riding off-road, or you?re more in tune with conventional street riding, ZERO motorcycles, based in Santa Cruz, CA offers bikes for either scenario. ZERO motorcycles are all electric and provide huge advantages over conventional gas-powered motorcycles. The off-roader is a dirt bike that rivals 250cc machines in terms of capability — it?s called the Zero X. The newest addition to the ZERO lineup is the ZERO S, which is intended primarily for street use. As all-electric bikes, neither uses fossil fuel ? in fact, they use no fuel at all. Both being electric, they move, appropriately enough, like a bolt of lightning. The ZERO X weighs in at a mere 140 pounds, while the more powerful ZERO S tips the scale at 225 pounds.

Since we?ve already reviewed the ZERO X, which first appeared in 2008, we?ll deal here with the 2009 ZERO S. The thin-wall frame of the S version alone weighs 29 pounds, and is made from high strength, lightweight, aircraft aluminum. The Z-Force proprietary Lithium Ion battery power pack tips the scale at 80 pounds, and is mounted low and forward in the frame. The motor, wheels, tires, controls, seat and suspension components make up the balance of the Zero S?s mass.

Power for the ZERO S comes from a brushed permanent magnet electric motor 4kWh (58 volts @70 Ah), which is fully rechargeable with the onboard charger in less than 4 hours by simply plugging into either a standard 110V or 220V outlet. The expected battery life is 4-5 years with normal usage. The motor delivers 31 horsepower along with 62.5 pound feet of torque. The peak electrical input is 22,000 watts. The positive, progressive torque and horsepower are delivered to the rear wheel via a final drive ? 420 Chain on sprocket (15-tooth front sprocket, 61 tooth rear sprocket). There is no clutch, nor is there a transmission ? there?s only one gear with a progressive speed advancement from zero to maximum through a 400 amp controller.

The Zero rides on lightweight, inverted, hydraulic dual front, fully adjustable forks with 8-inches of travel up front, and a single coil-over shock for the rear double diamond adjustable swingarm featuring 9-inches of travel. Tires are of Taiwanese origin (110/70-16 front ? 140/70-16 rear, and are mounted on lace-spoke, hollow core alloy wheels front and rear. Braking chores are taken care of by single stainless steel discs fore and aft with a right hand control lever manipulating the front wheel brake and a conventional right side foot lever activating the rear wheel brake.

Unlike the ZERO X, the Zero S has no speed range regulating capacitor or torque application switch — simply a power key and bar-mounted on/off switches.

Visually, Zero motorcycles appear to be a normal machines, until one notices the fact that there is no exhaust. The fenders and protective bodywork are made of polycarbonate material that is impervious to breakage. Another factor that becomes readily apparent when the bike is switched on, is that there is practically no operational noise aside from a slight whir and chain on sprocket buzz. This latter reality is an endearing quality that allows both ZERO models to be ridden without incurring the wrath of those opposed to the traditional noise pollution normally emitted by traditional gas-powered two-wheelers. 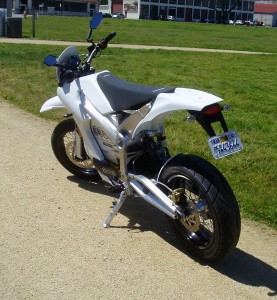 The quietness coupled with the fact that there is no fire danger created by spark or exhaust, allows for riding sans pavement. The Zero S development took only 7 months from design to production, with initial plans to produce 600 units.?

The ZERO S launch featured only one pre-volume production bike to share, so testing was unfortunately limited to a very short ride, unlike the ZERO X introduction where an extensive riding opportunity was provided on a challenging motocross course. A more extensive riding opportunity, with more seat time was promised as production volume is ramped up, making more bikes available.

SUMMARY: The Zero S is an intriguing machine that is not only fun, but practical to ride. It?s capable of zipping from 0-60 mph in under 4 seconds, with a top speed of 60 mph. The operating range under normal conditions is 60 miles, and the operating cost is less than $.01per mile. The lack of traditional engine and exhaust noise is uncanny, as is the 100 percent torque at all times for instantaneous throttle response. Despite the tall saddle (35.5-inches), which is shared with the ZERO X, the ZERO S is comfortable to ride and is exceptionally well-balanced with mid controls and a decent riding position for sporty maneuverability. 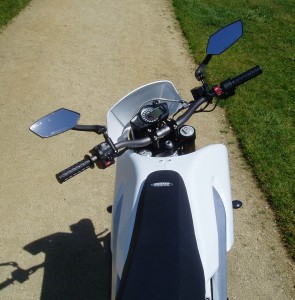 Environmentally, the ZERO S is the only electric bike (aside from its stable mate) with a non-toxic power pack, containing no toxic metal such as cobalt, nickel, lead or mercury in the Lithium Ion battery, which is also land-fill approved in the U.S., Canada and Europe, and is completely recyclable.

The Zero S comes with an onboard charger and the bike produces less than one- tenth the pollution of that produced by a gas-powered motorcycle. So?.for those riders who are not off-roading or motocross aficionados, the 2009 ZERO S is the ideal street legal version ZERO motorcycle. The power delivery is unbelievable, and gauges are provided for speed (both digital and analog), charge and motor temperature. There is a projector beam headlamp and directional signals for street legal operation.?

Zero Motorcycles warranties its frames to be free from defects for one full year from the date of purchase. For more information on Zero Motorcycles log onto www.zeromotorcycles.com. In the case of the ZERO S, zero is a really big number and the S can be for Street or Super Moto, the style in which the bike is executed ? your choice.