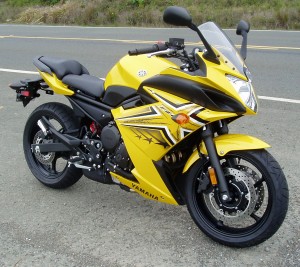 ?Initially, one might think that the all-new 2009 FZ6R sport bike is simply an enhanced FZ6. Not so ? the only thing on the entire bike that is from the FZ6, is the basic engine design. The FZ6R ranks as a sport bike for the budget minded in Yamaha?s stable, but in spite of its value positioning, it possesses several high tech features, and more than a few innovative touches that ultimately make for a most pleasurable riding experience.

Anyone who reads this column regularly is already aware that I?m not generally a big fan of sports bikes, and actually prefer cruisers because of their affinity for higher levels of comfort, due to, among other factors, their inherently more relaxed, upright riding position.?

The Yamaha FZ6R may well redefine what is expected from an entry-level sport bike in today?s marketplace. It comes with features that are normally not found on bikes in its price range ? things such as: its 600cc motor; relatively upright riding position with a low seat height; a streamlined, aerodynamic full fairing; comfortable handlebars; and controls that are positioned only slightly aft of the bike?s center.

The 600cc cc liquid-cooled 4-stroke, DOHC, 16-valve inline?? four-cylinder – fuel injected engine features a larger air box than the FZ6 with reduced intake noise and is a rigid mount, stressed member of the new steel framed chassis. The motor makes 78 horsepower @ 10,000 rpm and delivers 44 pound feet of torque @ 8,500 rpm ? both figures were measured at the crankshaft and give up roughly 8 percent at the rear wheel. The engine has been tuned to deliver a smooth and predictable power across a low to mid range. Exhaust is a four-into-two into-one system with a unique mid-ship muffler design that is similar to Yamaha?s R6 sporty. There is a 3-way catalytic converter that meets strict emission requirements. The transmission is a six-speed manual with a multi-plate wet clutch that meters power to the final chain drive. Combined mileage estimates are 43 mpg, which is an 8 percent increase over the FZ6. 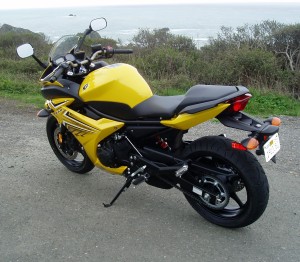 The bike features new aggressive track styling, with a traditional sport bike image that?s suited to a broad and varied range of riding applications, and it comes in four paint schemes: Team Yamaha Blue with specific White graphics; Raven; Cadmium Yellow with Black and White starburst graphics; and Pearl White with Pink and Black Tribal graphics. The Raven (Black) version is base priced at $6,990 while the graphic schemed bikes start at $7,090. 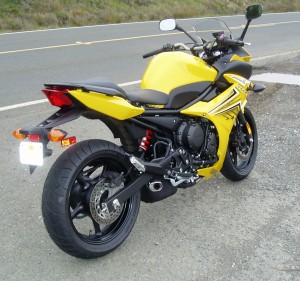 In addition to its high degree of technological benefits, adjustability is likely to be the real key to the FZ6R?s appeal. The stock height of the narrow and easy to straddle seat is 30.9-inches, with the ability of raising it three-quarters of an inch in a matter of minutes by repositioning four fasteners with tools provided in the bike?s standard tool kit. The handlebars may be positioned forward by a similar measure with tools provided as well.?

I rode a Cadmium Yellow version of the FZ6R at the bike?s press introduction, which was staged out of Santa Rosa in Northern California. The price as tested was estimated at $7,290.

SUMMARY: ?The intro ride covered a variety of riding scenarios, all of which the FZ6R was well suited to. Every imaginable road type was encountered from urban streets to freeway riding with exhilarating long sweepers, radical twisties, one lane stretches, tight switchbacks with rapid elevation changes and severely rutted surfaces thrown in for good measure. Our route took us from Santa Rosa, past Calistoga over highway 128, crossing Highway 101, past the Lake Sonoma Recreation Area to the Pacific Coast Highway, through the Salt Point State Park and past historic Russian Fort Ross to Jenner, then inland through Monte Rio and Guerneville on the Russian River, and finally back to Santa Rosa and the home base Vintner?s Inn. The total distance amounted to just over 140 miles that lasted all day through sun, clouds and modest rain showers.

The FZ6R took it all in stride, delivering compliant suspension, positive handling, pleasing acceleration and smooth, positive gear changes. Braking is positive as well, and I enjoyed the ride despite the exceptionally cold temperatures and occasional shower, as the bike is surprisingly comfortable. 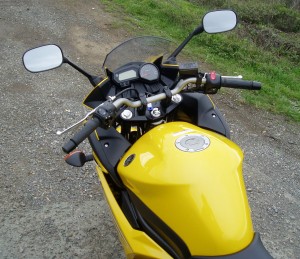 The 2009 Yamaha FZ6R is well suited to a variety of rider levels from entry to intermediate, and in fact, even expert riders can enjoy its versatility and performance. The 600cc inline four is incredibly smooth and is ideally appropriate for a wide range of riders. The instrument panel consists of a high quality FZ1-style meter that includes a digital speedometer and analog tach, along with other pertinent information. The tank is sculpted stylishly and suitably, allowing even long-limbed riders to tuck their knees in.

Bottom line, the FZ6R is a highly desirable, well balanced and affordable sport bike in its stock state, but there is also a host of accessories for dressing it up and personalizing it to suit individual tastes. Yamaha planned their work and worked their plan well on the FZ6R. It?s a bike that will serve both genders equally well. 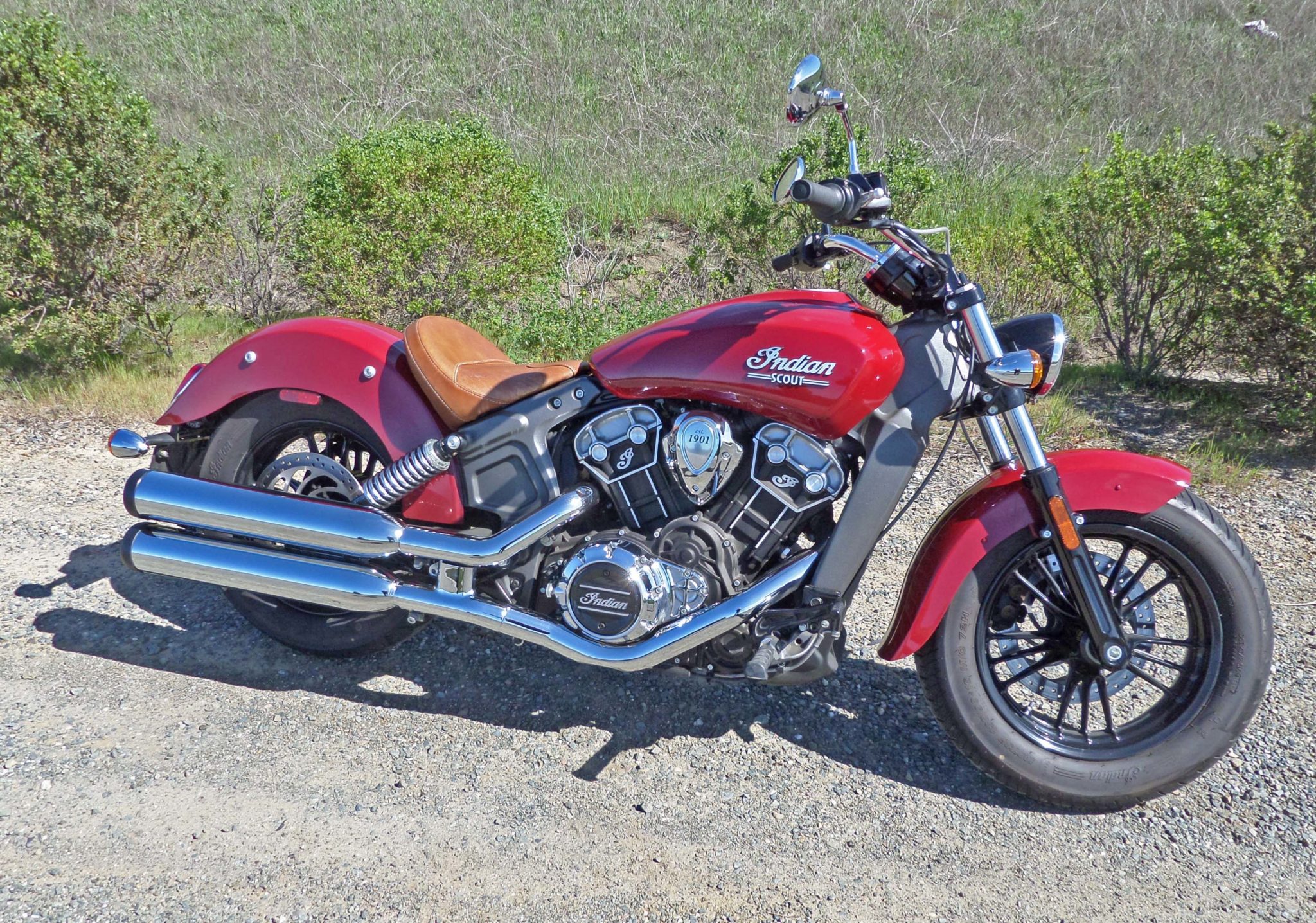 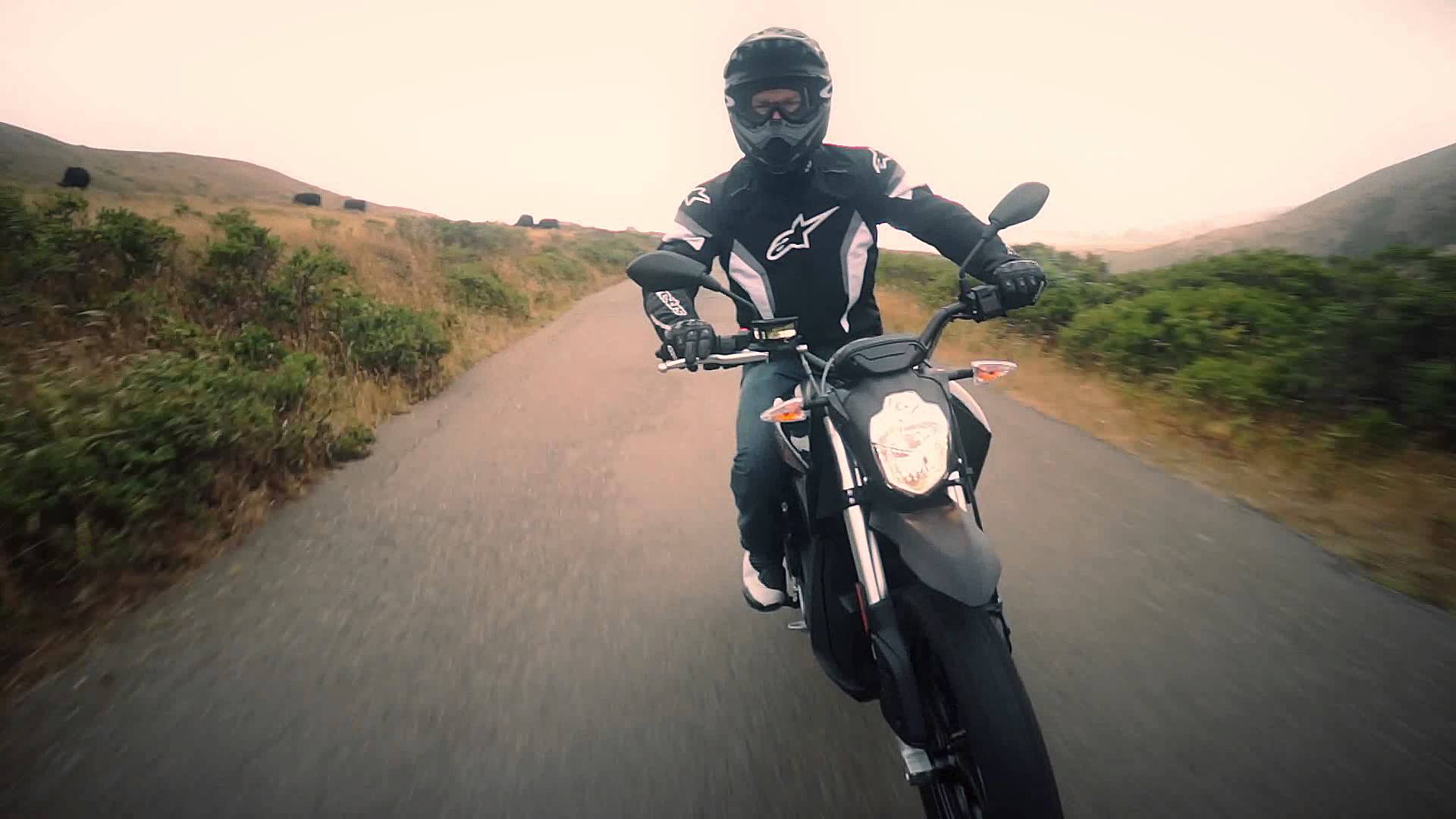