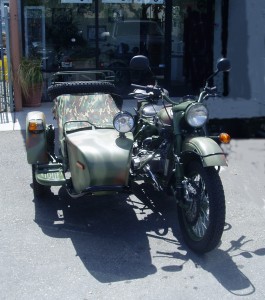 Okay, it had to happen sooner or later — someone had to come up with a Sport Utility Motorcycle (SUM). Actually, such a machine has been around for quite awhile — it’s the Ural, and it’s been here in the U.S. since 1993. The Cold War is definitely over in the motorcycle world, as evidenced by the Ural, which is a Russian-built motorcycle with a side car.

The Ural descended from a late 1930s BMW R71, when Joseph Stalin ordered the production of a motorcycle/sidecar rig for military use by the Red Army. Russian engineers managed to obtain a handful of the BMW R71 models (the method of aquisition is officially unconfirmed) for the purpose of copying them at a factory located in Moscow. The Soviet replica was code named M-72 and was into full production by 1942 in the city of Irbit, in the foothills of the Ural mountains, safely out of range of German aircraft raids. Ural military production reached almost 10,000 units during the war, and were later sold to Russian civilians and neighboring nations as well as allies like Cuba. Production climbed to approximately 130,000 Urals annually by the mid1980s in their huge facility. The Ural was a most popular transportation mode for the working class due to its aflordability and practicality. When the U.S.S.R. as we know it fell, Ural production plummeted to as little as 2000 bikes per year.

The company entered partial private ownership in 1992, and purchased outright in 1998 by a private well-to-do businessman. Seattle-based, independent importers Classic Motorcycles & Sidecars began handling distribution in 1993. The current organization– Irbit MotorWorks of America which is based in Redmond, Washington is the result of a 2002 management buyout which included the factory as well as U.S. distribution, reminiscent of the AM F/Harley-Davidson transition.

There are five side car model Urals, two of which are equipped with on-demand two-wheel drive. The Gear Up and Patrol models are the two-wheel drive rigs, while the conventionally driven units include: the Tourist; the Retro; and Tourist. Only one solo model exists — the Wolf.

All Ural sidecar rigs are powered by an OHV air-cooled, four-stroke (Boxer-type) 749 cc flat-opposed twin cylinder motor fed by twin KEIHIN 1 22 AA carburetors with manual enricheners (chokes) for cold starts. The motor makes 40 horsepower @5,600 rpm. Gear changes are made via a five-speed transmission — four forward and 1 reverse with a dry double disc clutch, through a shaft drive to the rear motorcycle wheel. Two-wheel drive may be manually engaged, also transferring power to the sidecar wheel, courtesy of a crossover driveshaft. Starting is accomplished by either an electric or kick-starter. 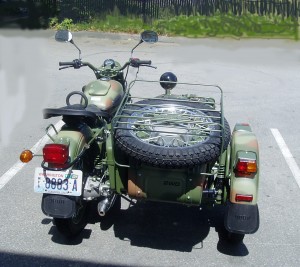 The Ural rides on 19-inch wheels with chrome steel spokes and cast aluminum hubs, shod with 4.00 x 19 tires all around. The front suspension consists of leading link forks up front and hydraulic spring shock absorbers aft. Stopping duty is handled by a Brembo disc forward and IMZ drums for both the bike’s rear and the sidecar.

I managed to obtain a Ural for review through the efforts of Ural’s American Sales and Marketing VP, Madina Merzhoyeva who enthusiastically pointed out that the Ural continues to evolve and improve with each model year — the ultimate goal being to achieve the quality level of that offered by Honda’s Gold Wing. Urals from a decade ago suffered from some reliability issues which, for the most part, have now been overcome. A two-year, unlimited parts and labor warranty, with unlimited mileage is now offered and U.S. sales have climbed from a meager 317 rigs four years ago to what is expected to total in the 800 range for the current year.

The initial appeal of the Ural comes from its classic appearance and aura of romantic adventure. Adventure is the operative element here — if it’s all-out racy performance you?re after, look elsewhere. The model that Merzhoyeva selected for me to review was their second most expensive — the Gear Up, which comes in two camoflage paint treatments: Forest or Desert Camo. Mine was done in the Forest flavor which is predominantly green in tone, while the Desert version features an orange and yellow base. The Retro model is Ural?s most expensive at $13,999. 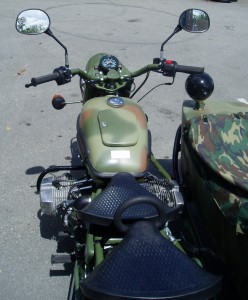 Before I could take delivery of the the Gear Up though, I had to take a crash course in sidecar rig operation (okay, crash probably isn’t the best term to use here). My instructor was Ski Jablonski, an affable enthusiast who abandoned the high-tech world of computer-based technology to turn Ural dealer, service rep and mechanic. Ski’s TriQuest Motorcycles in Santa Clara, CA. specializes in all things Ural and willingly spent several hours conducting my Ural orientation, both off and on the bike. in and out of the sidecar. Without his expert tutelage, either the Ural or I would have no doubt suffered some form of damage.

Piloting a sidecar rig is only vaguely similar to riding a conventional motorcycle –the mechanical controls are essentially the same, but the physics are?dramatically different. Side car rigs are asymmetrical rather than symmetrical which basically translates to the fact that the sidecar wheel is positioned ahead of the motocycle’s rear wheel rather than in line with it. The motorcylce counter-steering principle is out the window with a sidecar setup unless one ?flys? the car on purpose or unintentionally -Sidecar rigs steer directly. Roll on the throttle and the bike pulls to the right — roll off and it veers left. Hang a tight, right hand corner going downhill at speed, particularly on a reverse camber surface, and you flirt with disaster. Body english is important with sidecars — leaning to the inside of turns is recommended in either direction, but mostly right.

My test Ural Gear Up done in Forest Camo with side car cloth camo tonneau and spotlight, now with a base price of $13,599. The out-the-door tag can amount to anywhere from $14,000 to $14,550 following dealer handling and preparation, along with a few possible accessories.

SUMMARY: The Gear Up Ural is ideal for a leisurely trek over the winding and picturesque Silverado Trail in the wine country of California’s beautifully scenic Napa Valley or the rural roads of Oregon. The pace is relaxed, as the Ural is much happier, and more in its element, in the 50 mph or less range, though it Is capable of achieving up to 62 mph when pushed hard (not recommended though — take time to smell the roses or grapes). 91 Octane fuel is recommended, and the 5 gallon tank will deliver 26-33 mpg. It is a delight with or without ballast, which my better half objected being referred to. The suspension is most compliant, even over rough and irregular surfaces and quite comfortable for both the rider and sidecar passenger.

Acceleration is not blistering mind you, but is certainly adequate given the Ural’s intended purpose — that of experiencing adventure and having fun on three wheels. The Gear Up comes with two rubber-covered, bushing-mounted, solo-style seats for accommodating two-up on the bike itself with foot pegs for both, but two-up is only recommended when the sidecar is also occupied. The downside of the rubber-covered seat is an unsightly transfer of the seat pattern to rider’s pants (wear black, not denim). The side car seat and seat back are padded vinyl, so no problem there.

The reverse gear feature is handy indeed, unless it decides not to engage (generally attributable to not being truly in neutral), so advance planning when parking is not a bad idea. Manually engaging two-wheel drive is simple, but is only for off-road use or scenarios where traction is an issue. Steering becomes?nearly impossible with 2WD engaged on paved surfaces. 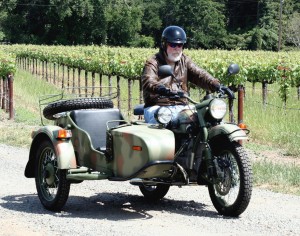 There are no windshields on the Gear Up for either rider or passenger, but adding them would contribute to the pleasantry of a bug-filled country excursion. There’s no fork lock either, but there is a parking brake that isn’t intuitive to the casual observer. The trunk in the aft section of the sidecar behind the passenger allows for carrying 2.9 feet of cargo — it doesn’t lock however. There is also no fuel gauge which requires resetting the odometer (in kilometers) and judging the the tank from full to empty is roughly 150-175 Klicks.

The Ural is a street legal ATV, and there are those who propose that three-wheeled vehicles do not require a motorcycle license cerrtification in some states, which would also tend to dictate that a helmet isn’t required either — bad idea. The jury Is still out on this issue, since after checking with the California Highway Patrol for one, the definitions were vague at best.

It seems that the only negative factor associated with traveling on a Ural, is the UDF, In the event that you’re in a hurry. UDF is the Ural Delay Factor which almost always includes a multitude of questions. The Gear Up was actually thought by most observers to be a restored World II bike, no doubt due to the Forest Camo paint treatment. Disbelief showed visibly when told it was a new model. How fast does it go, and how much does it cost? were other frequent queries. The latter also prompted disbelief.

I for one am glad that Urals are available to now be enjoyed here on our shores, and not simply “Back In The USSR”. 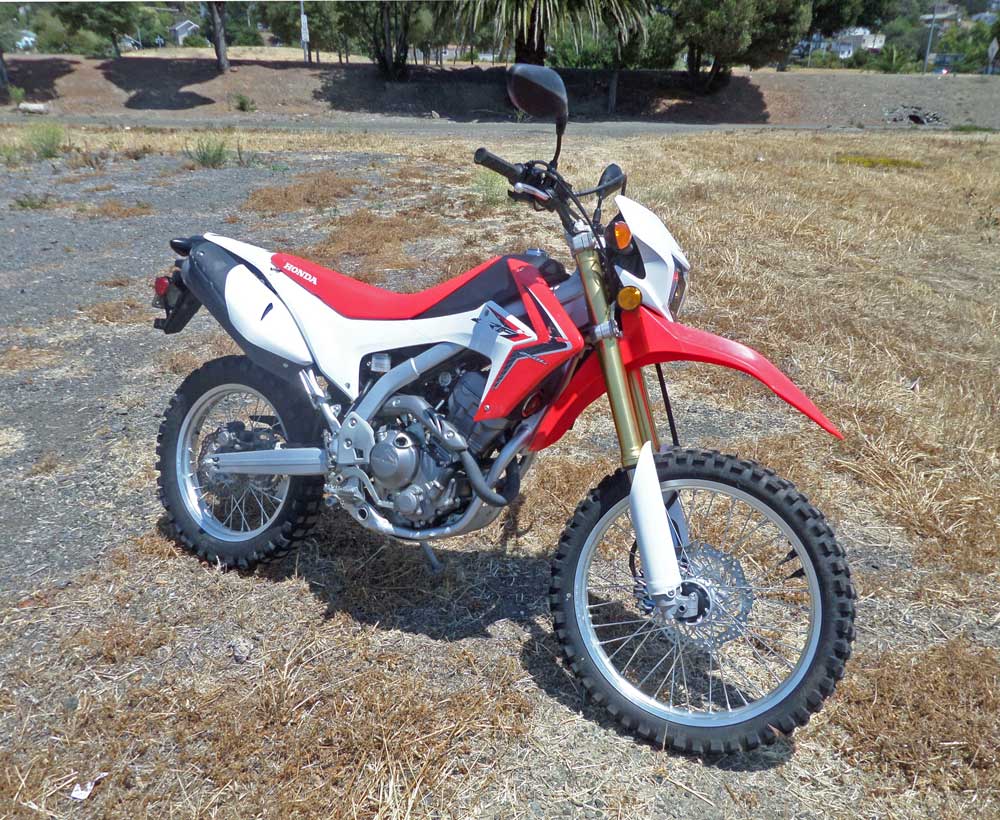 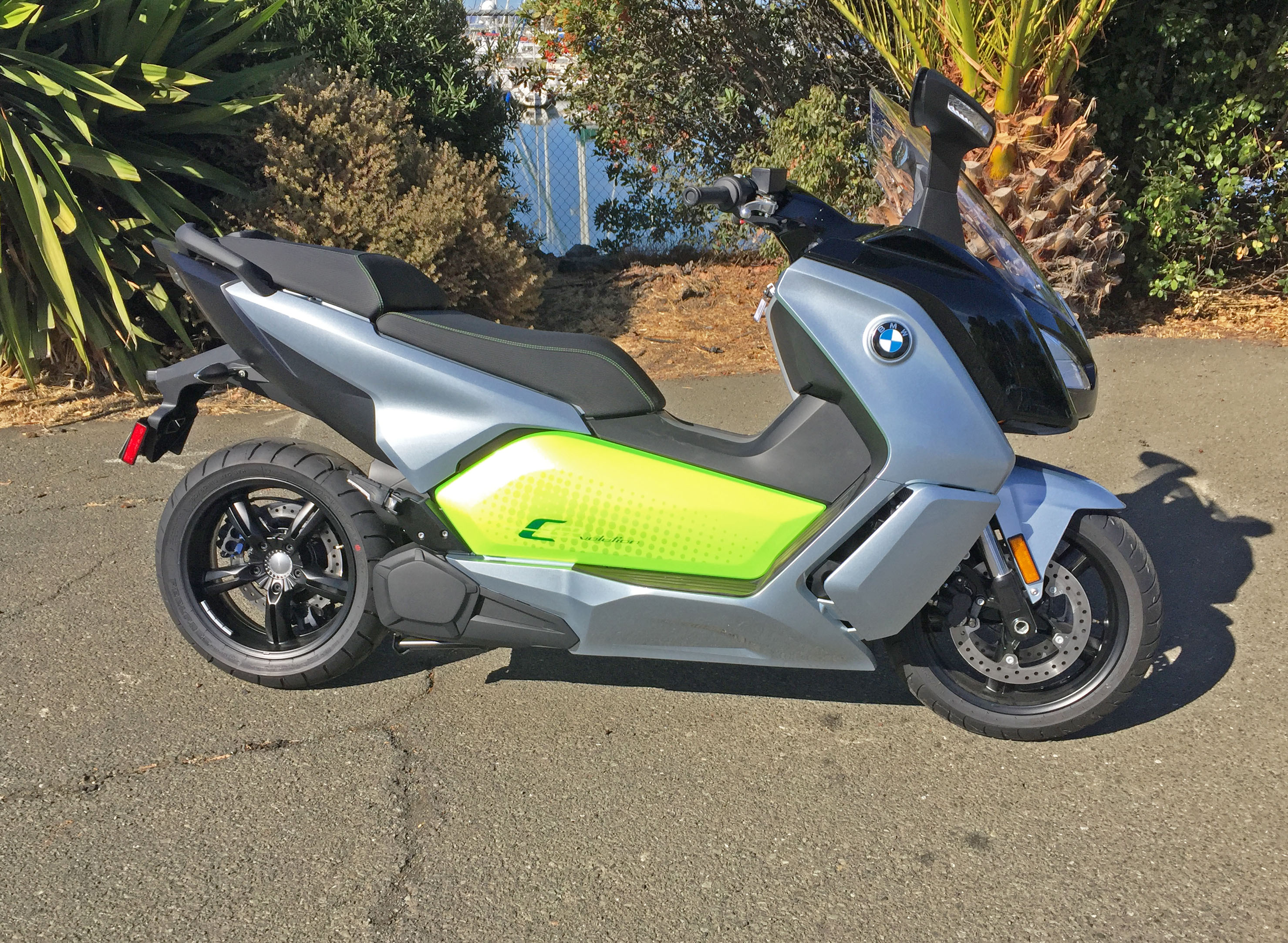