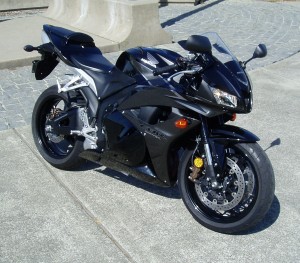 For those who regularly peruse my reviews of two-wheeled transport, it?s certainly no secret that I?m a much bigger fan of standard motorcycles and of the cruiser genre than I am of all-out sport bikes. There?s nothing wrong with sport bikes mind you, but lately I seem to be getting more than my share of them to test and review. I?ve never had the likes of a Goldwing or Fury from the Honda lineup, both of which I would love to try on for size ? and that?s where the rub comes.? Size is the culprit ? at least my size is. I?m 6?4? and the majority of my height is in my legs. It?s not the fault of most sport bikes that I don?t fit well.

Ty Van Hooydonk, primary spokesperson for the Discover Today?s Motorcycling organization and representative for the Mototrcycle Industry Council called recently and indicated that he would be delivering Honda?s CBR600 RR wth combined ABS for me to review. He was quick to point out that he was aware that the bike might not necessarily be my ?cuppa tea?, but that it was an incredible machine with lots of the latest applications in motorcycle technology. As it turns out, Ty was right on target with both observations.

The CBR600 RR isn?t a bike that I would pick as my daily rider, due to my penchant for cruisers, or at least for sport bikes with a more upright riding position. Throwing a leg over the Honda sporty is indeed easy enough, but folding up my long legs to get my feet onto the pegs for takeoff requires some advanced level of gymnastics. Next, reaching the drastically downturned handlebars necessitates leaning forward at an exaggerated angle over the fuel tank and holding my head up at an uncomfortable level, particularly with the added weight of a full face helmet. Then there?s the fact that all of one?s upper body weight is focused on and burdening one?s wrists. And finally, the short flyscreen was positioned to direct airflow directly into my face as I was forced to hang over it in reaching the grips. 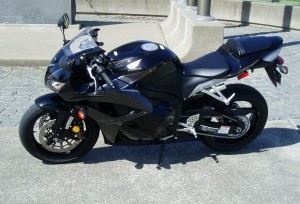 All that having been said, the fully faired CBR600 RR is a beautifully sculpted and attractive bike that has a lot to offer in terms of performance. It is powered by a 599 cc DOHC, 16-valve, liquid-cooled inline four-cylinder engine with Dual Stage Fuel Injection featuring 40mm throttle bodies, Denso 12-hole injectors and computer-controlled digital transistorized ignition with ??????????? 3-D mapping. Honda traditionally does not reference horsepower or torque ratings, but there happens to be plenty of both available. The bike?s motive force reaches the final drive #525 O-ring chain rear wheel that is metered through a close ratio six-speed sequential manual gearbox.?

In terms of its size, the CBR600 RR?s wheelbase measures 53.9 inches, with an overall length of 79.1 inches. The rake and Trail are 23.5 inches and 3.9 inches respectively. It weighs in at 410 pounds ready to ride, with all required fluids and a full tank of fuel, which holds 4.8 gallons including a 0.9-gallon reserve. The seat height is a manageable 32.3 inches.

The Combined ABS is a new advanced braking system designed specifically for supersport motor-cycles. It is the most advanced braking system?offered to the motorcycling public, employing an Anti-lock Braking System (ABS) through all-new technology. Honda?s Combined ABS represents the first use in a supersport street bike of a braking system that incorporates an Electronic Control?Module to manage the system while providing accurate braking force distribution to both wheels, which ensures precise and predictable brake operation without concern for wheel lockup in straight-line conditions. Combined ABS minimizes changes in chassis attitude under maximum braking conditions; even under the highest levels of deceleration, allowing the bike to retain a neutral position, virtually eliminating rear wheel lift. Application of the rear brake doesn?t result in?immediate front brake activation unless rear-wheel lock-up is sensed, allowing an experienced rider to use the rear brake like a traditional non-linked unit during spirited riding such as track days for outstanding speed, suspension and steering control. 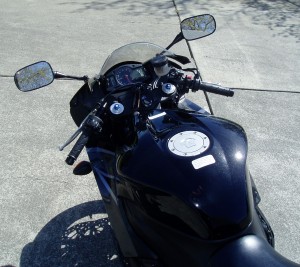 My test Honda CBR600 RR sported metallic black body work including the full fairing and fenders with Charcoal and Silver metallic graphics. The base price was set at $11,599. Figure roughly another @200 for dealer handling and prep work.?

SUMMARY: ?If I were under 6 feet tall, with shorter legs, Honda?s CBR600 RR would be a lot more appealing to me, and even despite my somewhat contorted riding position when aboard, it is an incredible machine that is great fun to ride. My neck is still sore after nearly a 100-mile ride over some twisty back roads.

Acceleration is blistering in any gear, and except for freeway stints, sixth gear is seldom necessary. The bike starts to come alive at around 7,500 rpms, but really reaches its full potential in the 11,000 rpm range. Redline comes at 15,000 rpm.?

The ride quality is smooth and compliant and handling characteristics are immediately responsive with minima input required for spirited riding. There are foot pegs for both rider and passenger, with storage beneath the removable passenger pillion. I created unwanted windage and found it necessary to croutch low at higher speeds to escape extreme buffeting (otherwise, my leather jacket flapped relentlessly.

The exhaust note was exhilarating, resembling that of a Formula 1 car when cranking the throttle full twist. Braking was exceptional, though I never needed the ABS function. It?s advisable to employ full on braking only when traveling in a straight line or the laws of physics are sure to come into play ? something you don?t want to experience.

Turn signals are not self-canceling, and the side stand must be up to fire the bike?s ignition ? deploying it with the engine running, acts as a kill switch.

The Honda CBR600 RR with the combined ABS feature comes on only two color schemes: Black and Red. And if the CBR600 RR doesn?t fulfill your need for speed, there?s always the CBR1000 RR. The CBR600 RR proved to be more than enough for me. So much so, that I may have to switch from coffee to make it my ?cuppa tea? 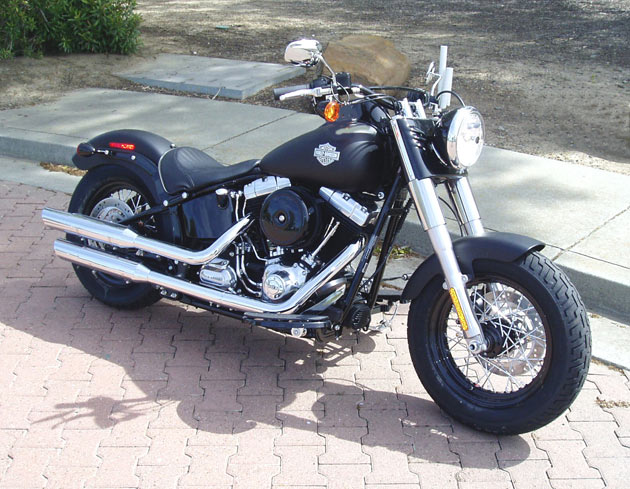 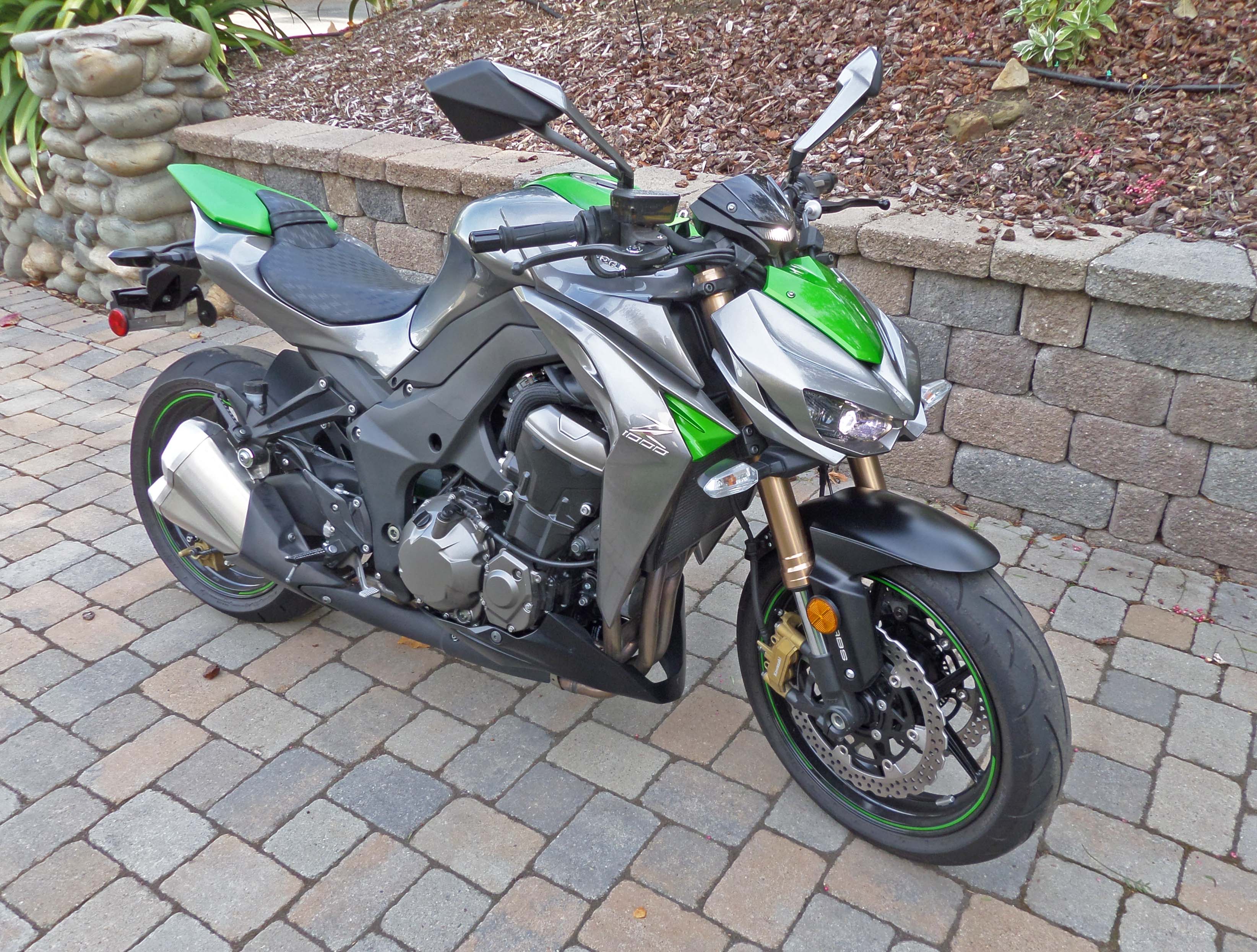