?Ducati?s Multistrada 1100S – A sport bike for a new generation? 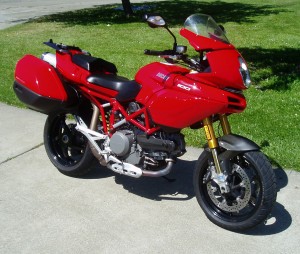 Ducati?s Multistrada comes in two configurations that both deliver features, setting the direction for a truly new generation of sport bike. First, there is the Multistrada 1100, followed by the Multistrada 1100 S, which is intended to satisfy riders who demand a higher level of sport performance. The Multistrada 1100 S comes with a higher level of suspension componentry derived from Ducati Superbikes, including fully-adjustable ?hlins suspension elements, along with a carbon fibre front mudguard (fender) and cam belt covers. It is essentially a production special bike that caters to sport riding characteristics, which focuses on versatility as well. Other racing components include exclusive variable-section alloy handlebars that are fitted with vibration isolator mounts. The ?hlins suspension, provides noticeable benefits, not only in terms of increased road handling, but in their quality appearance as well. The basic chassis remains the same, with the unmistakable Ducati Trellis round steel-tube frame combining with the fully-adjustable suspension, allowing the rider to adapt the bike to varying road conditions and riding styles to ensure optimum comfort.?

The Multistrada, though most commonly referred to as a sport bike, is essentially a sport tourer, but with a minimum of bodywork, giving it a ?naked? flavor as well. It is a bike that is suited to more mundane everyday riding scenarios, but without sacrificing any of its superbike capabilities. It?s ideal for a spirited jaunt on mountain roads, daily commuting, or relaxed weekend touring.

Power comes from a 1078 cc air-cooled, Desmodromic L-Twin cylinder, dual spark motor with 2 valves per cylinder, Marelli electronic fuel injection delivered through a 45 mm throttle body. The exhaust consists of a steel muffler and pre-silencer with catalytic converter and lambda probe, exiting through twin outlets, with an authoritative note. 95 horsepower is generated @ 7,750? rpm, while cranking out 102.5 pound feet of? torque @ 4,750? rpm. Motive energy is regulated through a six-speed manual transmission with wet multi-plate, hydraulically controlled clutch featuring lighter effort. The primary drive consists of straight ?cut gears, with a chain final drive to the rear wheel. 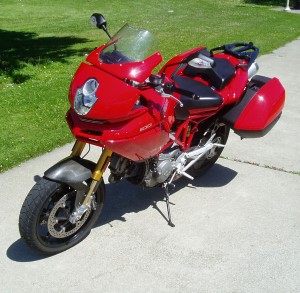 Up front 43mm ?hlins inverted forks with low friction TiN fork sliders, with adjustable hydraulic compression and 6.5-inches of travel, are complemented in the rear by progressive linkage with fully adjustable ?hlins monoshock with hydraulic remote preload control and an aluminum single-sided swingarm with 5.6-inches of travel.?

?In its appearance, the two-part nose fairing, with its transparent windscreen precedes the handlebars and moves with them. The fuel tank and seat assembly come from a single molding and provide a fuel capacity of 5.3 gallons (including a 1.7 reserve) and a fuel reserve sensor. Other design features of the Multistrada are the recognizable front headlight cluster, single-sided aluminum swing arm, the tail section and the aggressive exhaust unit. 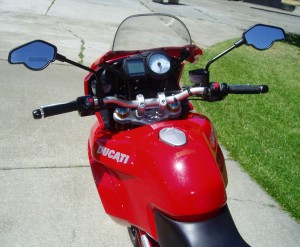 Two display management functions feature: trip fuel and auto ?light off? system. The former is an additional trip meter that activates when the fuel reserve light is on, while the latter is a feature that automatically switches off the lights after 60 seconds of key-on if the engine is not running.

My test Ducati Multistrada 1100 S was finished in Bright Red with black seats and carbon fibre trim. The base price was set at $14,495. while the bags bumped the final tag to $15,495. The tank was signed by Cook Neilsen, noted moto-journalist and racer, who competed as #31 on it in the 2008 Moto Giro.

SUMMARY:? The Multistrada 1100 S is Italian born and bred, with its development taking place on the winding mountain roads and city streets of Italy. It is truly a real-world sports bike that delivers high performance while also providing a comfortable riding position and a high level of practicality and versatility. The controls are placed mid-bike, with the handlebars comfortably positioned.?

Rolling on the throttle renders instant gratification with massive accompanying torque levels across a very broad range. In fact, when trail braking on sharp curves in lower gears, it?s a good idea to pay close attention to throttle input to ensure directional stability. The ride is compliant without being either too harsh or too soft ? I didn?t change the settings for my bulk, or I?m sure that I could have fine-tuned and smoothed out the ride even more. Braking is spot on, bringing the Multistrada down to 0 mph in short order. 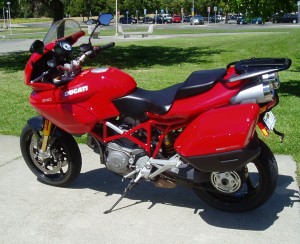 The Multistrada 1100 S is sure to widen the scope for those riders who are ?sport bikers? at heart but who would like to have a bike that?s suitable for everyday use. The powerful and torquey 1100 Desmo L-Twin engine delivers smooth, tractable power in a refined chassis, resulting in confident handling and pleasing comfort, even on long rides. The bike?s good looks drew favorable comments from appreciative riders everywhere I rode.