A bike with a definitive purpose 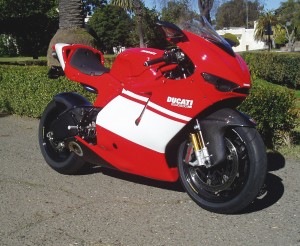 Mention Ducati in a crowd of sport bike enthusiasts and you?ve got the attention of most. Drop the name Desmosedici RR and you?ve more than likely gotten everyone?s undivided attention. The Desmosedici RR is an incredible machine ? it?s derived from the Desmosedici GP6 Grand Prix Racing MotoGP Ducati Corse that was ridden by Loris Capirossi and Sete Gibernau in the 2006 MotoGP World Championship.

The 2009 Ducati Desmosedici RR is a faithful, street-legal replica of the GP6. It is essentially the first MotoGP bike to be built with the street in mind, but with a slight detuning from the all-outrace version, and with the integration of streetable electronics. The bike has a singular, definitive purpose ? to go fast. Very, very fast. The bike rockets from 0-60 mph in 2.43 seconds in unofficial tests. Top speed is196 mph only due to gearing limitations ? at a test in China, a Desmosedici RR in race trim was clocked at 217 mph.

Power comes from Ducati?s D16RR 989 cc DOHC, 16-valve, Desmodromic, liquid-cooled, L-4-cylinder with gear driven crankshafts, with four 50 mm Magneti Marelli throttle bodies and 12-hole ?microjet? injectors above, and with manual idle control (choke). The bike comes with two exhaust systems: the street exhaust/silencer is a 4-into-2-into-2 vertical exit, while the Race exhaust is a 2-into-1-into-1 arrangement without conventional mufflers. The potent motor makes 200 horsepower @ 13,800 rpm with a 14,200 rpm rev limiter. The torque generated amounts to 85.55 pound feet @ 10,500 rpm. Connecting rids, valves with CrN surface coating and keepers are all Titanium. Rocker arms are case-hardened and super-polished. The crankshaft is high-strength forged steel. Rounding out the use of exotic and light weight materials are: the RR58 high-performance aluminum alloy pistons, cylinder heads and 4 gallon fuel tank, and the magnesium wheels, generator, timing and cam covers, clutch lever and oil sump. Final driving force reaches the rear wheel via a chain, through a 6-speed cassette type transmission with a hydraulically activated dry multi-plate slipper clutch. 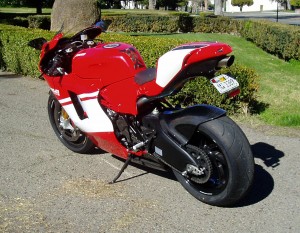 The bike is an engineering marvel that features a host of innovative technologies and exotic materials. Production is limited to only 1500 with a base price set at $72,500. At first, that might sound like a lofty sum, but when all is?considered and everything is factored into the equation, it?s really a bargain. You probably won?t be able to obtain one at that price, since it?s highly sought after,?but regardless of the final count and amount, a 3-year warranty and free maintenance are included along with a rear-wheel stand (there?s also a side stand) and race graphic decal kit.

In addition to its inherent engineering achievements, the Desmosedici RR is a rapid transit mobile art form. It comes finished in two paint schemes: Marlboro?Red with White striping team colors or a Rosso (Red) with White number plates. A rear-wheel stand and race graphics are included with each bike as well. The full fairing and bodywork are fashioned from carbon fiber with the fenders left unpainted. Carbon fiber components in addition to the primary fairing include: the front and rear fenders, foot peg protectors, air box, side panels, front and rear subframes (the rear subframe represents a first for a mass produced bike), front shield, radiator duct, lower basin and tail section.? 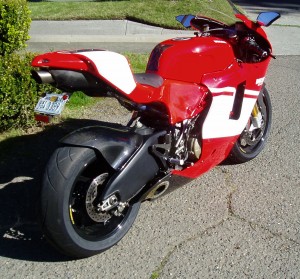 The frame is a steel trellis type that joins the steering head pipe to the engine cylinder heads. The wheelbase measures 56.30-inches, with an overall length of 80.31-inches. Seat height is 32.60-inches, and the bike tips the scale dry at 364 pounds.

With a bike that is capable of such high speeds, braking is equally important, and the Desmosedici RR comes to a halt courtesy of two Brembo radial ?monoblock? callipers with four? 34 mm pistons clamping on two semi-floating 330 mm x 5 mm discs up front, and – ?240 mm fixed disc, calliper with two 34 mm pistons in the rear.

My test bike was provided by Ducati of North America, and was number 162 of 1500. It was finished in the team paint scheme, and the out-the-door price was estimated to be roughly $80,000 after factoring in dealer prep, destination, taxes and registration. It was equipped with the full MotoGP race exhaust and belly pan.?

SUMMARY:? Now that you have most of the basic background info on the Desmosedici RR from Ducati, you?re probably wondering what it?s like to ridesuch an incredible bike. First of all, let me set the scenario ? I?m a cruiser guy at heart, and I?m also 6?4?, so right off the bat, I don?t fall into the ideal ergonomic form for such a machine. Basically, I guess you could say that I?m not worthy, or the proper fit for such a machine, and that would be a fair assumption on your part indeed.? 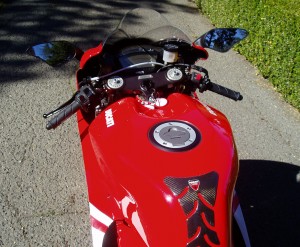 The Desmosedici RR is intimidating if not daunting for one of ectomorphic proportions. As already stated, it is a street-legal MotoGP race bike. It ranks far above the capability of the non-expert professional racer. It is a beast. The throttle is hair trigger, delivering awesome power output almost by simply thinking about it — the clutch is however tame enough and adjustable. The bike is exceptionally compact and lightweight, rendering it as not the most comfortable ride in the world for a large rider with long legs.

That having been said, as thrilling and awesome as it may be, it?s not a bike that?s intended for long cross-country jaunts. The suspension is, by necessity, stiff in order to achieve the required stability and handling characteristics, so encountering a pothole may cause male riders some discomfort due to the totally laid over riding position. I was rather out of place somewhat resembling a pretzel astride this beautiful piece of machinery ? visualize here, a gorilla on a mini-sport bike. Never the less, I felt privileged to have had the experience of riding a bike with such capability and raw power. It was much like my first stint behind the wheel of a prototype Dodge Viper ? it requires total focus on the task at hand – at least the Viper has four wheels. 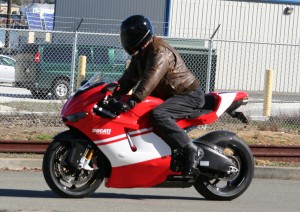 The Desmosedici displays a positive steering response with minimal effort, and turns in quickly. Minimal effort, in fact, is encouraged to avoid trouble. I was wearing a new pair of Alpinestar S-MX-4 boots that were on the stiff side, since they weren?t broken in yet, so shifting was a little difficult with my big feet, in my contorted position. Proper throttle application is key to avoid keeping the front wheel in the air, which results in steering difficulty ? roll on quickly and with gusto, and you can feel the front wheel begin to lift. Brake application is equally a factor ? finesse here is virtue if not a necessity.

Riding for any length of time resulted in sore neck muscles due to holding my head up at an unnatural angle, while trying to look forward from my unrelaxed riding position. My wrists also became strained from upper body weight pressure. Essentially, riding the Ducati Desmosedici RR is an exercise for not the young at heart, but rather the genuinely young, with supple and more flexible bodies more compact in stature, and befitting the bike. Bottom line, the Desmosedici RR is an extremely capable bike for extreme sporty types with a healthy spendable income.