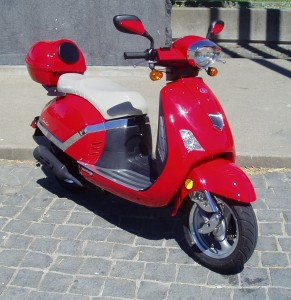 Without question, both the motorcycle and scooter markets represent a rapidly growing hotbed of activity, and given today?s outrageously high fuel prices, sales of the two-wheelers are soaring. Scooters are generally less expensive than most motorcycles, and they?re also generally more fuel efficient. The old adage ?You get what you pay for? holds true in purchasing either a motorcycle or motor scooter.

Chinese manufacturers have long been expert at producing ?knock-off? products for considerably less money than the genuine article and scooters abound in China, coming in virtually every size and shape. The problem with much of China?s motor vehicle output, is that the quality is often lacking, and thereby, the reliability and dependability of such products can be disappointingly short-lived.

What would happen if one were able to envision and oversee the manufacture of Chinese scooters and influence the quality control factor in their production, at the same time incorporating Western technology and improvements? The answer to that folks, is, that you would have a scooter or scooters with improved appeal and longevity.

Leon Li, formerly a highly successful real estate sales agent, had such a vision following a two-wheeled adventure traversing much of China. While visiting China on vacation, Li, who speaks fluent Chinese, purchased a scooter and traveled with his girlfriend across China into Mongolia ? not the easiest of journeys. The scooter to his surprise, proved to be fairly dependable, dispelling the idea that most low cost Chinese scooters were little more than junk by U.S. standards. In a truly entrepreneurial spirit, he imported a lot of 20 scooters, which were resold here in the U.S. for a substantial profit. The venture worked so well, that the decision was made to purchase a shipping container filled with even more scooters. Again, they sold out in short order, and again at a profit. It was felt that a niche had been discovered that could easily be filled yielding a substantial monetary return on his investment, so two more container loads were imported in the dead of Winter ? it was then that the realization that scooters comprised somewhat of a seasonal market — consequently and unfortunately, sales slumped drastically. Sagging sales activity coupled with the failing reliability and parts availability prompted regrouping to establish a more viable approach to the scooter market.?? ? ? ? ? ? ? ? ? ? ? ? ? ? ? ? ? ? ? ? ? ? ? ? ? ? ? ? ? ? ? ? ? ? ??

Li, together with partner Daniel Pak (the two share the same Operations Manager title), determined to develop their own line of scooters ? still imported from China, but manufactured to their specifications with online facility managers in place to ensure quality control and to oversee the implementation of their required improvements and enhancements. This was accomplished after researching more than seven individual scooter-manufacturing operations. The line of scooters is called Flyscooters. In addition, the partners decided to establish a network of sales outlets (dealers currently number 90 plus) with parts and service backing, thereby increasing product value and reliability. Local availability includes outlets in Alameda, Elk Grove, Sacramento, San Francisco and Vacaville. There are no online sales. 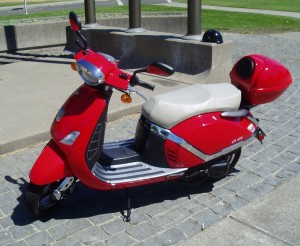 Flyscooters, which is based in Emeryville, CA, offers a lineup that currently consists of two 50 cc models and two 150 cc models. The 50 cc scooters range in price from $1,400 to $1,700, while the 150 cc scooters cost from $2,000 to $2,700. The company also maintains an office in China, and is looking toward future expansion of their product line, with larger displacement units including two 260 cc models and a 300 cc scooter, as well as more innovative products, such as possibly three wheeled models. Flyscooters offers several accessory items? — among them: windshields, tour-packs, locks, helmets and logo apparel.

I tested a 150 cc La Vie model Flyscooter finished in Montego Red, with a complementing Ivory dual seat. Other available colors include: Sea Mist Green, Peruvian Gold and Cinnamon Brown. The base price of the scooter was set at $2,200 with the final total amounting to $2,700 after adding a few upgrades and dealer prep.

Power for the La Vie is provided by a 151 cc GYC air-cooled, four stroke, carbuereted single cylinder motor that develops 8.4 horsepower @ 7,000 rpm and 5.0 pound feet of torque @6,000 rpm. The transmission is a Continuously Variable Transmission (CVT automatic) with a dry, centrifugal-type internal clutch. The final drive consists of a shaft into the rear wheel rim, based off of a clutch and variator to a series of gears.

SUMMARY:? Flyscooters philosophy is to offer the best value for the money without claiming to be either the cheapest or the best, and they certainly seem to have accomplished that goal. The La Vie Flyscooter that I rode had several worthwhile features to offer. There was locking underseat storage, a locking tour pack capable of storing a full face helmet, pop-out passenger foot pegs, both a side and a center stand, a locking front end and a locking forward compartment.? 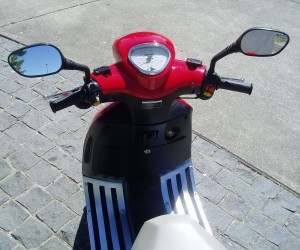 The La Vie Flyscooter looks and feels much like a classic early Vespa, except that the body panels are made from scratch and ding resistant ABS material rather than fiberglass or metal. There are also lots of attractive chrome trim accents that aid in dressing up the scooter?s overall appearance.?

Since there?s no clutch lever to worry about, the left-hand lever controls the rear brake, while the right-hand lever actuates the front brake. One can actually engage the rear brake as if it were a clutch, releasing it after rolling on the throttle.

The La Vie is exceptionally well balanced with a 54.8-inch wheelbase and 75.1-inch overall length. It tips the scales at a mere 242 pounds (dry). The fuel capacity is 1.3 gallons which still provides decent range. The seat height is a fairly tall 33-inches, so those with really short inseams need not apply. I?m told that the seats for replacement models are lower and contoured at the leading edge for not only more comfort, but for easier touchdown for the vertically challenged. It is freeway legal, with a top speed of 55 mph, but it the La Vie is really much more comfortable ?scooting? around in an urban environment.? 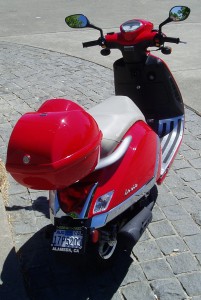 I had but two nits to pick with the La Vie ? the floorboard is a tad on the short side for taller riders, but in its defense, this is an issue that may be overcome by sliding back onto the passenger portion of the dual seat. Riding two up of course precludes that solution, and for that matter, shortens the board distance to an even greater degree. The other negative matter was an excessively loud, repetitive beep when the non-self-canceling directional signals were activated ? Fortunately, this issue has been corrected along with the new seat configuration,? eliminating this annoyance. Not necessarily an issue, but deploying the sidestand does not kill the engine which is the norm, and starting the motor cannot be accomplished until applying one of the brakes. There is also a center stand provided.

My test La Vie Flyscooter was great fun to ride and represented an outstanding?value at less than half the cost of a new Vespa . (I actually had a couple of younger women yell out their car window ??Hey I like your Vespa? ? a testament to the scooter?s visual appeal), and with nearly 3,000 miles on the odometer, there seemed to be no reliability problems except an often persnickety ignition switch cylinder.

I?m not sure if it has anything to do with the company?s name inspiration, but it is definitely a ?Fly? scooter. Oh, and being able to cover 150 miles or so on a tank, with a fillup of Premium fuel costing under $6.00 when priced at $4.159 per gallon tends to give one a nice warm feeling. 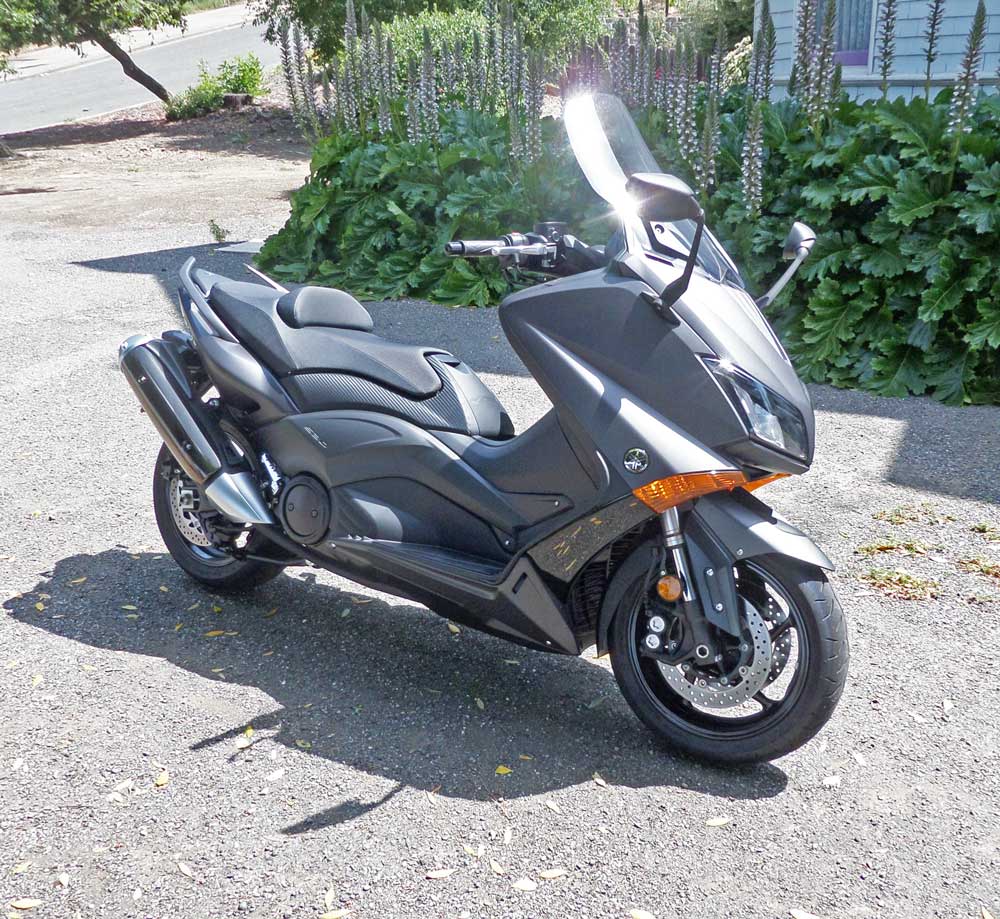