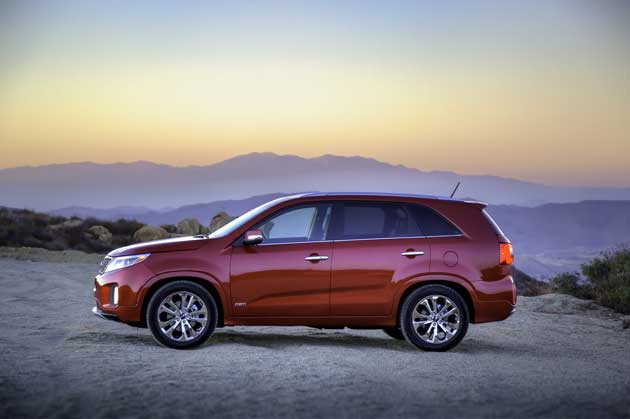 By Barbara Schaffer
Phoenix ? Kia made an interesting move with the Sorento CUV for 2014. Rather than waiting for a more customary five to seven years between all new re-engineered and redesigned models, it took the Sorento, which was all new for the 2011 model year, and?re-engineered?it for 2014.

The other thing that was puzzling about the 2014 Kia Sorento is that even though it has an all new chassis, engine and substantially redesigned interior the exterior only shows a facelift, not a completely new design. That?s doubly puzzling based on the heavy emphasis the company has recently shown for fresh designs. In fact, they even promoted their chief designer, Peter Schreyer, to a top corporate position. 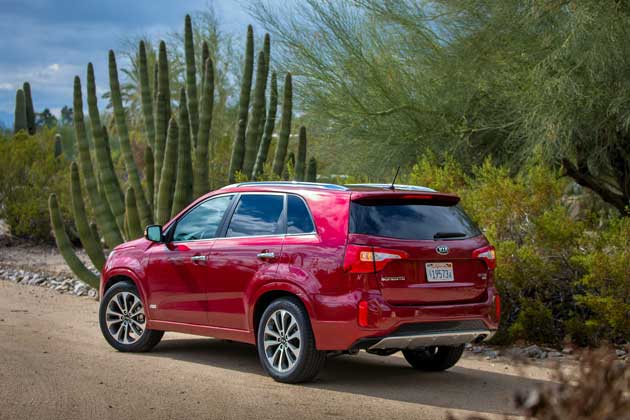 The exterior changes include redesigned front and rear fascias, which give the Sorento a wider, lower look along with some changes to Kia?s ?tiger-nose? grille. The front and back lights got an update and the wheels, which go a large as 19-inchs, are new. The final product looks very good, and distinctive, but not a lot different. Perhaps, I was expecting more Optima- or Forte-like changes.

The interior gets a more through updating with a re-designed instrument panel incorporating more technology and better ergonomics. I especially like the new instrument cluster with its seven-inch TFT LCD display in the center with the digital speedometer. The cluster has an interesting mix of digital and analog displays that look great and are user friendly. The interior is so roomy that the 2014 Kia Sorento again is offered with an optional third row package ($1,000) to provide ?way back? room for a couple of smaller people. 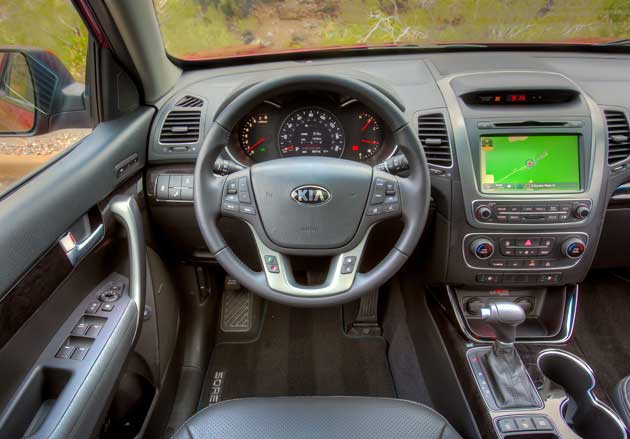 The well-organized center stack controls are gathered conveniently in sections defined by metallic-looking borders. The optional eight-inch navigation touch screen, near the top of the stack, is easily visible for the driver and front seat passenger, or navigator as we call that person at my house.
The screen integrates navigation, UVO eServices (Kia?s next generation of infotainment and telematics) SiriusXM Traffic??with real-time road information, premium Infinity??audio system, SiruisXM? Satellite Radio and?Bluetooth?.

In total, the 2014 Kia Sorento is 80 percent new, and it may be that much better, too, which is impressive when you consider that the previous generation was very good. And that?s not just me saying that. Consumer Reports ranked the 2013 model number two of the midsize SUVs, showing better scores than everything but the Toyota Highland Hybrid. 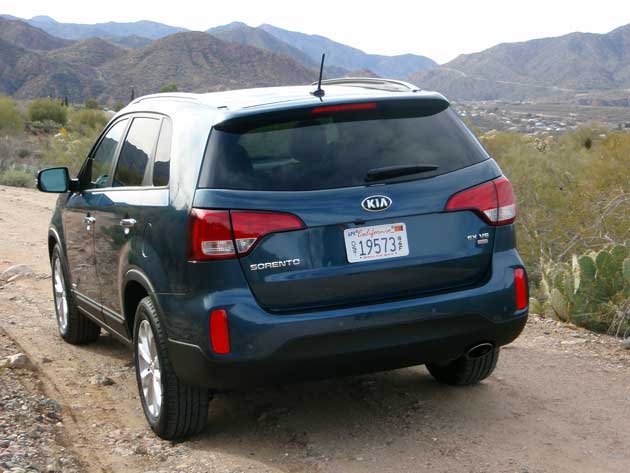 I was able to spend some time in the 2014 Kia Sorento recently in Phoenix. The new Sorento re-engineering includes a more powerful and economical new V-6 engine mounted in a stiff new chassis with an innovative electric power steering, next generation UVO eServices and an elegant new interior. And that?s just the highlights.

Kia Executive Vice President, Michael Sprague, explains the Sorento best. ?With each new vehicle launch Kia is advancing the concept of value to new levels of sophistication and with significant chassis, suspension, powertrain and comfort and convenience upgrades.? he continued, ?It?s obvious that the improvements are not just skin deep; including technological enhancements such as UVO eServices, the next generation of our voice activated telematics system, and Kia?s first-ever blind spot detection system.?
The all-new chassis increases torsional rigidity by 18-percent, which combined with a new independent front suspension, makes significant improvements to ride and handling. The multi-link rear suspension has also been changed to cut road noise and allow more interior space.

All the models have Kia?s six-speed electronically controlled automatic transmission with the Sportmatc? manual shifting mode. All models are front-wheel drive, with all-wheel drive as a $1,700 option. I haven?t been able to run down a credible 0 to 60 mph acceleration time for the new V-6, but it feels very fast, I?m guessing less than eight seconds. The EPA fuel economy is listed at 18 mpg city and 24 mpg highway, with the AWD model at one mile per gallon less in the city. 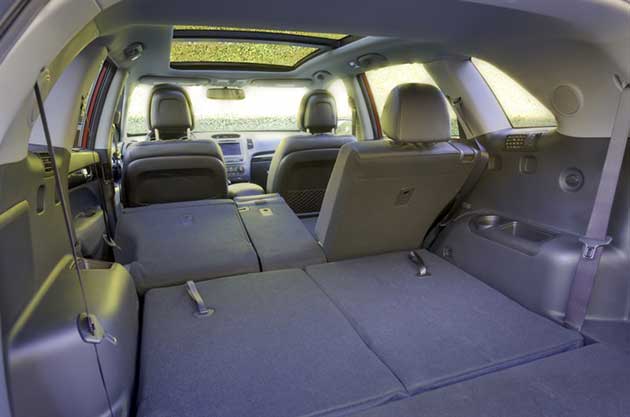 The 2014 Kia Sorento pricing starts at $24,950, including the destination charge, for the front-wheel drive LX trim with four-cylinder engine and goes as high as $40,550 for the AWD Limited with V-6 engine. Other than the third row seating and a couple of aftermarket-like accessories, the Limited has EVERYTHING, just like my favorite bagel. 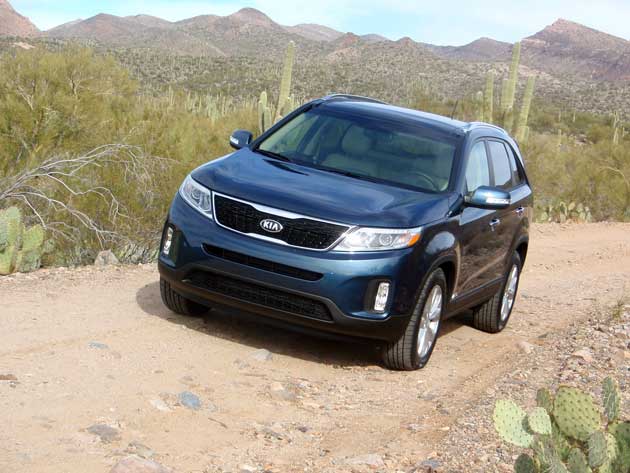 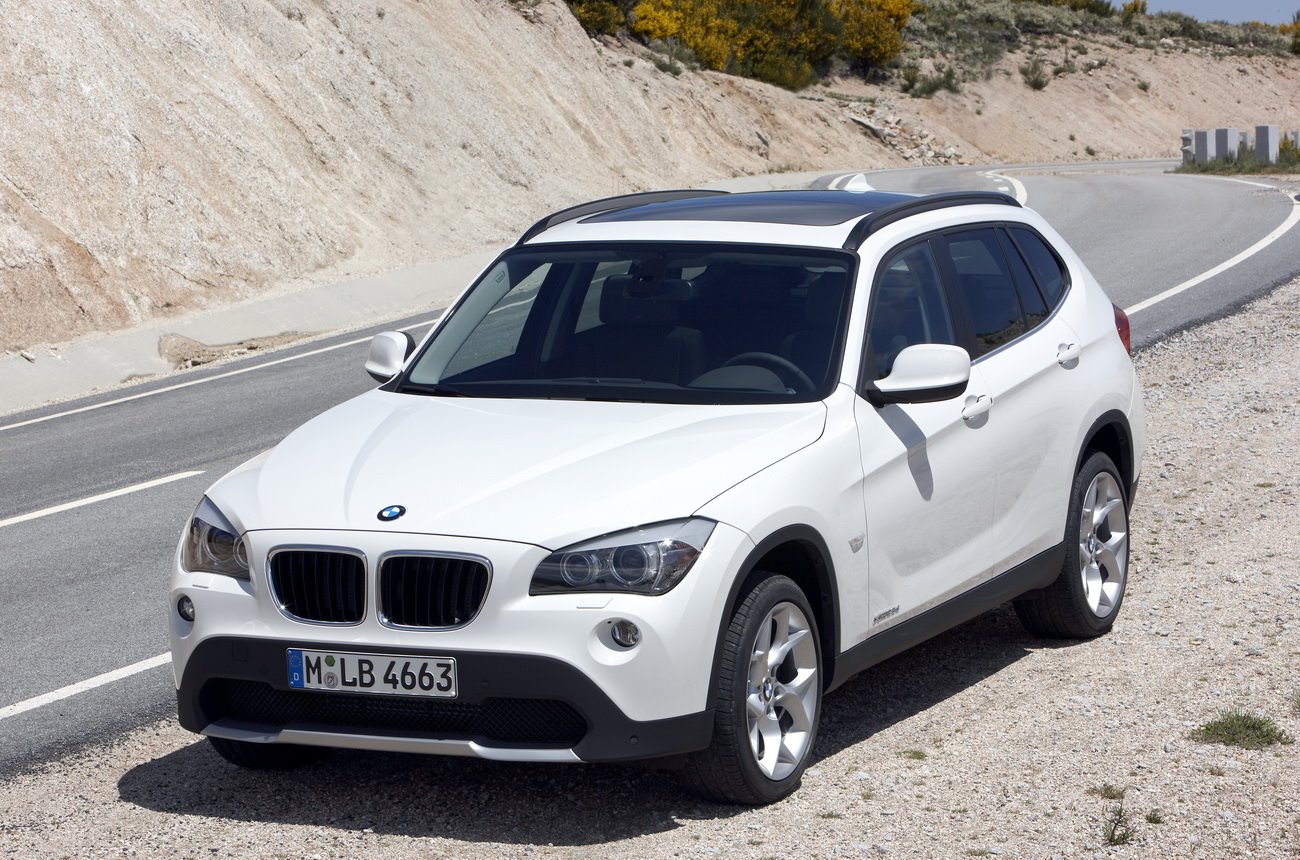