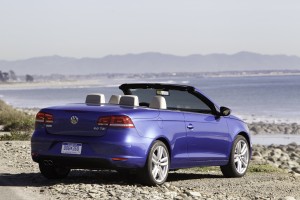 Palm Springs, Calif. ? We like convertibles, but we fall into the fair-weather category — when the temperatures go north of 80 degrees a coupe is more our style.? Fortunately, we were driving the Volkswagen Eos, which happens to be one of the most versatile convertibles you can buy.? It?s a neat little coupe complete with a full functioning sunroof, but push a button, and 25 seconds later, it?s a full-fledged convertible, with the hard top tucked neatly in the trunk.

The idea of driving a convertible from Los Angles to spend a few days in the desert oasis of Palm Springs, seemed like a good idea at the time we made plans, but we were glad to have the very well air-conditioned coupe when the temperature climbed to 118 degrees Fahrenheit one afternoon.? Going topless in Palm Springs was limited, unfortunately, to some early morning and late evening jaunts. ?

Besides having this incredible versatility, the VW Eos, is just a fun car.? Its small, agile size making it perfect for around town, but it has good performance when it was time to accelerate on to a freeway or for passing a slow-moving truck on a two-lane road. 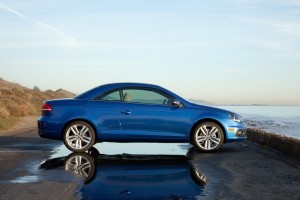 ????? The 2012 Eos is powered by one of the best four-cylinder engines in the business.? Volkswagen gets good use of this four-cylinder turbo engine using it in many the VW models and in several Audi models.? Even in this basic form, rated at 200 horsepower, this 2.0-liter engine makes a 0 to 60 mph run in only 7.4 seconds.? ?The Eos transmission is VW?s excellent ?direct shift gearbox? DSG? six-speed automatic with Tiptronic? control.?? The DSG shifts quickly and with great efficiency either automatically or manually with the Tiptronic control. ?The EPA lists fuel economy at 22 mpg city and 30 mpg highway.? We actually averaged 27.9 mpg during our round trip from Los Angeles to Palm Springs and around town for three days.

For the times we were able to drive in the open air, there?s a pop-up mesh wind deflector that does a good job of channeling the wind around the cabin and making it easy to converse even when traveling at highway speeds.? As a coupe, the Eos has 10.5 cubic feet of cargo space, but the top takes up 3.9 cubic feet of space, leaving only 6.6 cubic feet which is only room enough for a couple of small to medium size bags. 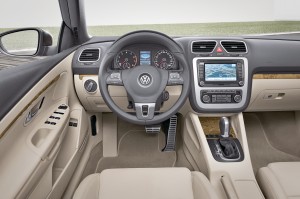 ??????????? Eos comes in three trim levels, Komfort, Lux and Executive.? Our test car was the base Komfort model, but you certainly wouldn?t know it from the equipment list which included features like 17-inch alloy wheels, heated front seats (which we obviously didn?t need in Palm Springs), touch screen Sirius Satellite Radio, six CD changer, Blue Tooth and a significant list of comfort and convenience features.? The base price for the Komfort is $34,765, including the destination charge.? The Lux builds on the features of the Komfort with extras like Bi-Xenon headlights, LED daytime running lights, leather seating, rain-sensing wipers and much more for the $38,020 price tag.? The new Executive Eos model adds more sport focused features like special wheels, sport suspension, navigation and premium Dynaudio? audio system for $39,990.? ??? The standard seats in the Komfort are a leatherette material Volkswagen calls V-Tex, that?s almost hard to distinguish from real leather.

Mechanically, the Eos rides on a four-wheel independent suspension with MacPherson struts up front and a four-link system in the rear along with self-leveling shocks.? The steering is electromechanical with a variable speed assist that produces a precise neutral feel.? The Eos also has a tight 35.8-foot turning radius, which adds to the agile impression.

The Eos hardtop not only creates a second car, it adds dimension of security.? A thief can?t slice the top and get in, there?s a little more top stability in case of a rollover and it protects the occupants better from the elements.? The hard top also provides better visibility to the typical cloth convertible top.? When the top is down it also has an Automatic Rollover Protection System that deploys hidden steel beams? from behind the back seat head restraints in the event of a rollover. ?In addition, Eos has a full complement of safety equipment including the electronic braking upgrades and stability control.

????? Unlike some convertibles that flex or shake on bumps, the Eos is completely rigid and that translates into a solid controlled ride and handling for all but the most aggressive drivers.

With the one caveat being a somewhat tight rear seat, we give the Volkswagen Eos high marks across the board.

by Barbara and Bill Schaffer