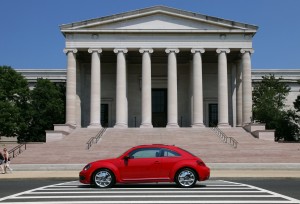 I watched Oprah television show in November 2010, when Volkswagen tantalized the studio audience to a preview of the all-new 2012 Beetle several months before the car debuted at the auto shows.? Then I was astonished when Volkswagen gave the entire audience (276 people) one of the new Beetles as part of Oprah?s ?Ultra Favorite Things? program. (I can’t believe they would miss one more for my garage, and I’ll take any color.

Those lucky 276 people received their new Volkswagen Beetles on October 13 at special ceremonies at 126 Volkswagen dealerships around the country. ? 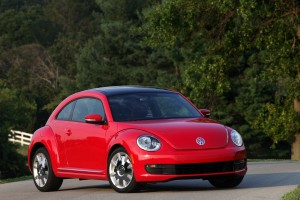 Jonathan Browning, president and CEO, Volkswagen of America, Inc., personally handed keys to the 2012 Beetle to 21 “Ultimate?Favorite Things? recipients at the Volkswagen of Orland Park dealership in Orland Park, Ill., and said, “The 2012 Beetle is an American icon that has been redesigned to fulfill the needs of the modern driver, while remaining true to its vintage characteristics. It is fully-customizable and is our sportiest, most fuel-efficient Beetle yet,? said Browning. “We are very proud to present a new generation of Beetle owners with a vehicle that is built with no-compromise German engineering, is fun to drive, and will no doubt spark a sense of nostalgia and community that only the Beetle can evoke.?

The recipients received the 2.5-liter Beetle models with 6-speed automatic transmissions. They chose the color of the vehicles from the following options: Denim Blue, Reflex Silver Metallic, Saturn Yellow and Tornado Red.

I?ve admired Volkswagen New Beetle since I drove the original in 1998 and was especially enamored by the cute styling and agile handling — Yes, I did say cute. ? It?s a happy car, after all, how many other cars had a bud vase built into dash and made you smile every time you drove it?

Perhaps people like me that gave the New Beetle the reputation of being a ?chick car.?? While that might not seem like a problem to women, it was a problem for Volkswagen because it limited their potential market.? Women don?t seem to have a problem driving ?guy cars? but macho men seem to have an aversion to driving a ?girly car?.

The new Beetle design specifically addresses that problem with more masculine lines and a bit more aggressive-look.? The resulting coupe is also larger (6-inches longer and 3.3-inches wider).? The new Beetle has much more complex design elements and character lines that combined to create a more dramatic sophisticated look, which men should like better.? I know this woman even likes the new design better, but don’t tell the guys, they may not like it. 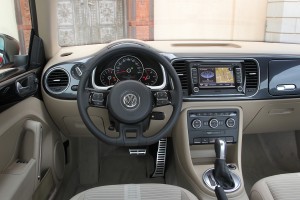 The new interior takes design cues from the original rear-engine Volkswagen Beetle, with its painted or carbon fiber-looking accents that make up the background for the entire dash.

The new instrument panel uses three round gauges with a multifunction display integrated into the bottom of the speedometer (the center gauge).? Maximizing the interior real estate, the new Beetle even has two glove boxes.? VW call the upper one kaeferfach or ?Beetle bin?.? A performance instrumentation package of gauges sits at the top of the center stack of Turbo versions.? It includes an oil temperature gauge, clock with stopwatch function and boost pressure gauge — that should appeal to those masculine drivers. 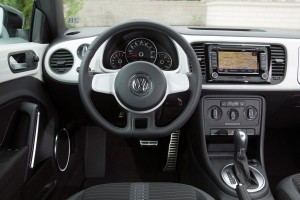 Headroom was never a problem on the original New Beetle with the tall cabin, and it?s still spacious in the new model even with its lower, longer roofline.? In fact, there?s actually a little more rear-seat headroom, almost two inches of front legroom and 2.5 inches of front shoulder room. ?I especially like that they were able to eliminate the super deep dash, too. ?The interior is nearly five percent larger and the trunk is a spacious 15.4 cubic feet with the rear seatback in place and nearly 30 cubic feet with the split rear seatback folded to haul golf clubs or a whole bunch of shopping bags.

Initially, the front wheel drive Beetle is offered with two drivetrain choices, the standard 170-hp, 2.5-liter five-cylinder gas engine with six-speed automatic transmission, or the 200-hp, 2.0-liter TSI? turbocharged four-cylinder engine with the DSG? six-speed dual-clutch automatic.? As the model year progresses, the pair will be offered with a manual transmission.? Volkswagen?s popular four-cylinder TDI Clean Diesel will be an available option in 2012.

Both models ride on a strut-type front suspension and torsion beam rear suspension with coil springs.? This configuration provides a smooth ride and good cornering control.? The Beetle is certainly not at the same handling or performance level as cars like the VW GTI, but it delivers a superb level that will please all but the most aggressive drivers. 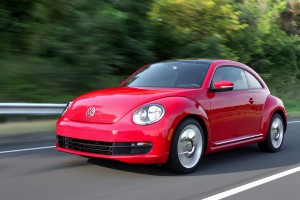 I drove the Beetle meandering through the Virginia countryside enjoying the supple ride and positive controls. ???Both versions were fun, but the turbocharged was my hands down favorite, with its excellent acceleration (0 to 60 mph in 6.3-seconds.) and fast-shifting DSG transmission.

Volkswagen has done a great job of maintaining the character of the Beetle while giving it a new maturity and sophistication in addition to being so much fun to drive.? I especially like the good visibility, comfortable interior, agility and tight turning radius.

Five-cylinder Beetle pricing starts at $19,765, including the destination charge, and $24,165 for the Turbo version.? The Turbo with sunroof, premium audio, navigation and the automatic transmission is $29,865.

One other thing that?s new about the new Volkswagen Beetle is the name?it?s no longer the Volkswagen New Beetle,but instead the Beetle, but it is new, and it?s very impressive. 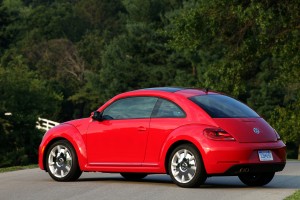