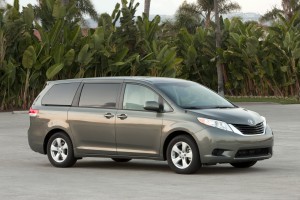 When you have a K&N Pro Series West NASCAR race team staying at your house and you are ferrying them back and forth to the track for a few days, it is certainly nice to have a minivan to carry seven adults and their backpacks.

This has become an annual event for us when Barb?s son-in-law, Todd, races at Portland International Raceway and this year we were fortunate to be testing the new Toyota Sienna minivan.

We picked up Todd, his crew chief and several key members of the pit crew at the airport for an 18-mile drive back to our house, and they were like a bunch of children, checking out all the features of the Sienna Limited. One guy pulled a DVD from his backpack so they could try out the Dual View Entertainment Center with its seamless 16.4-inch widescreen.? The passengers in the second row captain?s chairs discovered the reclining seats with footrests and stretched like they were in home recliners. 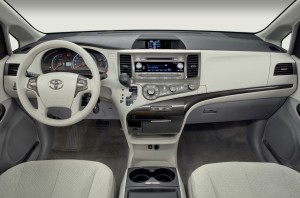 Even with a full load of passengers and luggage, the Sienna went down the road flat and stable — there was little of the dip, dive or wavering we?ve felt in other vehicles loaded to capacity.? When we arrived home, the Sienna climbed our steep hair-pin-shaped driveway as if there were just the two of us inside.

A 266-hp DOHC aluminum V-6 engine powers the three upper-level Siennas and is an option on the base and LE models.? For the first time this new generation Sienna has a 187-hp, 2.7-liter four-cylinder provides the power for the two lower level versions.? All engines are outfitted with a six-speed automatic transmission.? The four-cylinder version earns a fuel economy rating of 19 mpg city and 26 mpg highway.? The V-6 is nearly as good at 16/22 mpg and we actually averaged 18.3 during our runs back and forth to the track.? Zero to 60 mph acceleration times are 9.5-seconds for the four-cylinder and 7.4-seconds for the V-6.

Sienna is the only minivan sold in the U.S. to offer an all-wheel drive option for V-6 powered models, giving it a distinct advantage in northern climates.? The V-6 also has a 3,500-pound towing capacity so families with recreational toys don?t have to depend on a truck to pull them. 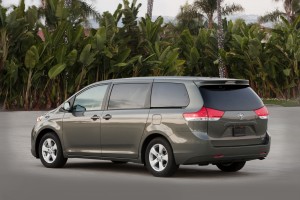 Starting at $24,260, the base Sienna offers high value and high content with air conditioning, tilt/telescoping steering wheel, cruise control, keyless entry, power windows, power locks and seven- or eight-passenger seating.? The luxury appointments of the Limited provide living room like comfort for families or empty nesters that like to take their friends or grand children along.

Upper level Siennas have a couple of electronic features we haven?t seen on any other vehicles: the Dual View Entertainment center with wide screen and the DVD navigation with a Panorama Camera integrated into the backup camera. ?The camera allows the driver to switch between the regular view and a wide-angle mode.

We have also come to appreciate the XM radio?s NavTraffic system that helps us spot and occasionally avoid stop and go traffic situations.? In addition, we liked that we were able to quickly link our cell phones through the Sienna Bluetooth system.

Like all Toyotas, the Sienna comes with the Star Safety System?, which includes a long list of acronym labeled features including ABS, EBD, BA, VSC, TRAC and EPS.?? There is also an optional Pre-Collision System (PCS) and Vehicle Dynamics Integration Management and the all-new Safety Connect? telematics system that can be used to locate a stolen vehicle, call emergency assistance and call roadside assistance.?? It also has Automatic Collision Notification in case of a crash.

We think Toyota, has taken the leadership in the innovative minivan segment with this latest iteration of the Sienna.

A racing post script: ??Another driver crashed into Todd near the end of the race dropping him back from fifth to finish a disappointing 13th in his car number 13, but the Sienna finished first during our four days of hosting a total of 12 ?race guys.?