More of a Good Thing 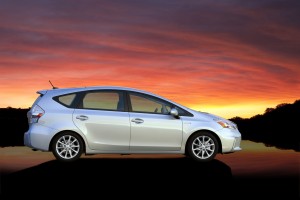 Monterey, Calif. ? By now nearly everyone is familiar with the Toyota Prius.? With more than one million of them on the American roads, they have become the standard for hybrids outnumbering all the other hybrids combined.

What most people don?t know is there are now three Prius models, or will be this fall, and a forth due soon. ?In addition to the current Prius, there is Prius Plug-In, the midsize Prius v and debuting earlier this year at the Detroit auto show was the Prius c Concept.

We spent a few hours recently driving the new ?v? version around the Monterey Peninsula and Carmel Valley and found it to be an important addition to the Prius lineup.? The ?v? stands for versatile, and it fits that description beautifully.

Except for a couple new features we?ll mention later, don?t expect the ?v? to be mechanically different from the regular Prius, because it?s basically the same vehicle. ?The big difference is size; it?s a little larger ? 3.0 inches in the wheelbase, 6.0-inches in length and 1.1-inches wider.? The roofline is extended a little flatter and is raised 3.3 inches to give it more of a wagon look.? And we both think it looks better than the original five-door.

The increase size is small on the outside, but it translates to three more cubic feet of interior room and that also allows for easier access, and an interior that feels more spacious, especially to the rear seat occupant.? ?The rear seats now slide 7.1 inches fore and aft, and have a 60/40 split back. 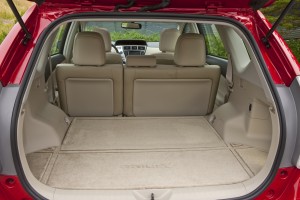 The cargo area is where the size change is most noticeable.? With all the seat backs up, the cargo space is 34.3 cubic feet (59 percent larger than the regular Prius).? With the rear seat folded, the cargo space grows to 67.3 cubic feet.? To put that in perspective, it?s about the same cargo volume as Toyota?s largest SUV, the Sequoia, when the third row is folded.

The extra space makes comfortable seating for five passengers, especially if the rear seat has three smaller people, or children.? We?ve been in a couple of Prius taxis, and while we applauded the concept, they weren?t overly spacious.? This new ?v? with the extra space would be a perfect taxi and obviously is a nice size family car. 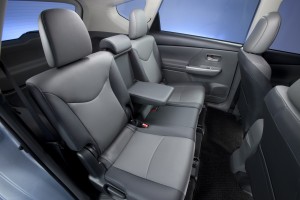 ??????????? We fell in love with the new optional seat fabric, which reminds of us of super soft and supple leather.? It?s called SofTex and the material is designed for easy cleaning and spill resistance.?? Another plus for SofTex is that it weighs about half as much as leather and uses about 99 percent fewer volatile organic compounds in the manufacturing than conventional synthetic leathers.

Because people who buy hybrids are often into technology, the Prius v has state-of-the-art electronics and enhanced connectivity features. ?A Bluetooth wireless connection for compatible hands-free phone calls is standard and it has an automatic phone book transfer function.? There is also a standard USB port that allows playing of music and video from portable audio devices, using the vehicle sound system and in-dash display screen.

Interestingly, the ?v? has two available navigation systems — a value-oriented version with a 6.1-inch display screen and an upscale model with a 7.0-inch screen. 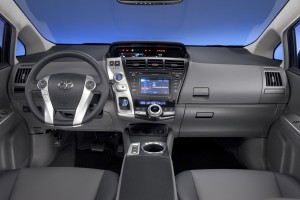 The screens both serve as a portal for Entune, an available HD Radio system that plays CD-quality sound from digital FM broadcasts and has features that maximize analog and AM broadcast sound quality.? The system will include HD Radio with iTunes tagging and SiriusXM Satellite Radio?.

Toyota Entune is the first system ever to support mobile apps, such as Bing, OpenTable, and movietickets.com, along with accessing useful travel-related services, such as live weather, traffic, fuel information (location and price), stocks, and sports.? What really caught our attention was the large selection of music options available to a vehicle, including iheartradio?s 750+ stations, and Pandora?s personalized music service.

Both systems have all the cool graphics of the energy monitor and fuel consumption data information, along with an integrated back-up camera.

The Hybrid Synergy Drive system in the Prius v is essentially the same as the current third-generation Prius.? It is built around a specially adapted, efficient 98-horsepower 1.8-liter Atkinson cycle four-cylinder engine that produces 134 horsepower when combined with the electric motors.? ?It uses two high-output motors, one 60kw (80 hp) unit that mainly works to power the compact, lightweight transaxle and another smaller motor that mainly works as the electric power source.? Maximum motor drive voltage is 650 volts DC. The ?v? uses the same nickel-metal hydride battery pack as the liftback.

The Prius v accelerates from 0 to 60 mph in 10.4 seconds, and has a top track speed of 103 mph.? The EPA estimates fuel economy at 44 city and 40 highway, and we actually averaged 44 mpg, according to the trip computer, during our driving around the peninsula.

One other new feature is the Pitch and Bounce Control that works with the suspension to improve ride comfort and control to avoid a ?porpoising? motion over bumps and when the vehicle has a heavier load.

To save power and improve visibility, the ?v? is offered with optional LED headlights.? They use projector lenses to produce long-range visibility and are designed to be virtually maintenance free for the expected life of the vehicle.

The Prius v is scheduled to arrive at Toyota dealers in the fall of 2011.? It will be available in three trim levels: the base model Two and the better equipped Three and Five.? Prices will be announced in the fall. 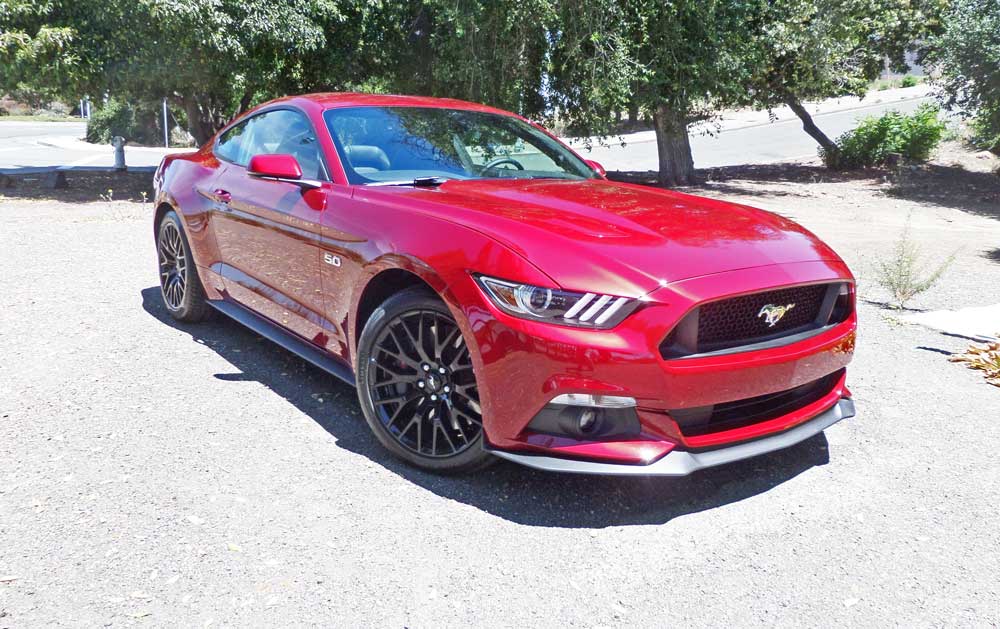