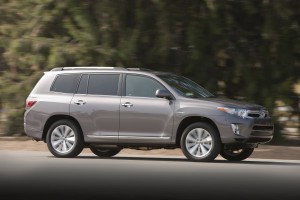 Hybrids have been around for more than a dozen years now, but we?ve never taken one on a road trip, so we thought it was about time.? With a possibility of snow and ice along our intended route, we decided it would be best to try a hybrid that offered four-wheel drive capabilities, too.

Enter the Toyota Highland Hybrid.? First introduced to the U.S. market in 2001, the Highland, which is based on a unibody frame derived from the Camry, became an instant success, especially with families.? In 2005, the Highlander was ?hybridized? making it the world?s first seven-passenger hybrid SUV.

Our Highland Hybrid road trip took us from Portland, Oregon, south on Interstate 5 to central California and then to the Monterey Bay area, where our grandchildren are located.? The route is not the most exciting, but it?s typical of what a family might drive.? Unfortunately, or perhaps fortunately, the roads were all clear and dry, so our only tests were drivability, comfort and fuel economy along with a hands-on demonstration of how a hybrid excels in stop and go traffic.

Driving normally, which is about 7 to 10 mph over the posted speed limit for us, the Highland averaged 25.1 mpg, which falls a little under the EPA estimates of 28 mpg city and highway?? However considering speeds of 75 to 80 mpg for much of the trip, that?s very respectable for a big seven-passenger SUV and significantly better than the Highlander V-6, which wears an EPA label of 18/24 and would likely suffer from the higher speed fuel economy penalty, too. 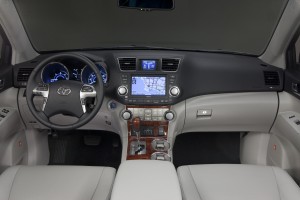 In addition to being a great highway cruiser, comfortable, spacious and quiet, we were surprised by how fast the hybrid accelerates.? The latest Highland Hybrid uses a more powerful 3.5-liter V-6 gasoline engine as part of the Hybrid Synergy Drive.? When combined with the two electric motors, the system produces 280 net horsepower, which makes it fly down freeway onramps pulling ahead of the fast-moving traffic.? The passing power on the occasional two-lane roads we were on was also very good. ?Buff magazines list a 0 to 60 mph time of 7.4 seconds, which makes it one of the fastest crossover SUVs in this catagory.

Unlike traditional four-wheel drive vehicles, which use a driveshaft to send power to the front or rear wheels, the front-wheel drive based Highland drives the rear wheel on-demand system with a rear-mounted electric motor ? no drive shaft.? The system then electronically varies the front and rear torque distribution depending on which wheels have the best traction. 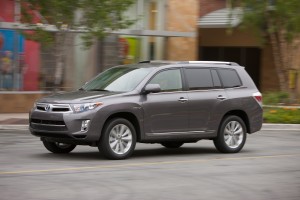 The Synergy Drive system has a handy feature we used in the Bay area stop and go traffic.? By activating the EV mode switch on the center console, it allowed us to operate as an electric only vehicle.? When the traffic started to roll forward after a frustrating stop, the Highlander stayed in the electric only mode, so the gas engine didn?t start.? The EV mode works until the battery starts getting too low which happens in a few miles and depending on usage.? When that happens, the gasoline engine starts again when traffic allows the vehicle to move forward.

One of our favorite winding roads is Hecker Pass, which climbs over the Santa Cruz Mountains between Watsonville and Gilroy, Calif.? The tight switchbacks and sweeping curves provide a great test area for vehicle handling.? The Highland Hybrid is no road racer, but it handles the corners with confidence and stability.? There?s an acceptable amount of body lean, no tire squeal and we never felt like we were pushing the limits as we ran through the corners at a little over the posted speeds.? The Highlander rides on a four-wheel independent suspension with MacPherson struts in front and a dual-link rear system in the rear.? Our test vehicle had the optional 19-inch ten-spoke alloy wheels, which not only look great, but also help handling traction.

Like all Toyota vehicles, the Highlander has Toyota’s Star Safety System?, which integrates Vehicle Stability Control (VSC), Traction Control, electric power steering (EPS) and the anti-lock brake system with Electronic Brake-force Distribution and Brake Assist.? The latest version of the VSC helps the driver maintain control by automatically adjusting engine output and braking force at each wheel under certain conditions, while also providing steering assistance in the appropriate direction.

All Highlander models have a Hill-Start Assist Control (HAC) that helps prevent the vehicle from rolling backward from a stop by applying braking pressure for approximately two seconds after the brake pedal is released.

The Highlander is available in two hybrid trim levels and three gasoline models. 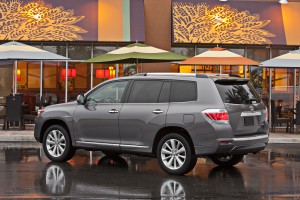