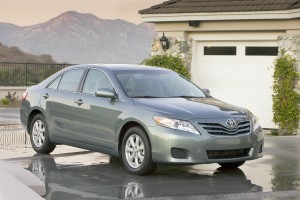 Toyota may have gone through the wringer the last year or two with recalls, earthquakes and Tsunamis, but if the new generation Camry is any indication, the company is better than ever.

The Camry may have been the number one selling car in the U.S. for the last nine years, but it has never had a strong emotional appeal for us.? It?s a great car, and probably one of the best cars built, but from a styling standpoint, it was like ? vanilla — in a world of chocolate ripple and Chunky Monkey. ?In fact, if we are not mistaken, Toyota invented vanilla. 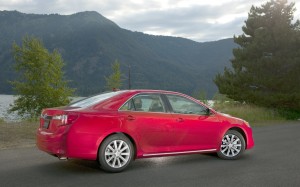 That?s changed; the latest iteration of the Camry is more like ? French Vanilla and it?s a delicious improvement.

On first glance, it looks very similar to the last generation Camry, but on closer examination, the lines are bolder with more character and a much more pronounced frontend and grille. Yep, definitely French Vanilla.

But, what starts to turn Camry in to more of a sundae or banana split are the mechanical and technical refinements.

First, the new Camry is fun to drive.? With its more rigid body structure, revised front and rear suspension coupled with crisp steering response, the Camry feels more like a sport sedan than passenger pleaser.? We were impressed too, by the ride made even more comfortable by the low noise interior.

We recently spent a week driving the V-6 version and found it to be very athletic and quite fast making a 0 to 60 mph run in just under six seconds. 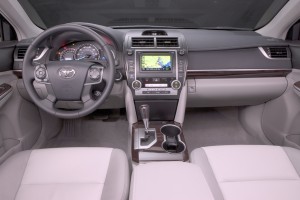 The entry slot and volume leader for the Camry is a 178-hp, 2.5-liter four-cylinder engine with a six-speed automatic transmission.? The pair produces an impressive 25 mpg city and 35 mpg highway fuel economy.

Only a small percentage of Camry buyers will order the 268-hp, 3.5-liter V-6 engine, but those that do will get impressive performance and fuel economy rated at 21/30 by the EPA.? We averaged 27.8 mpg during our week of mixed driving conditions. ?(There?s also a hybrid version which gets 43/39 mpg and we?ll review that at a later date.)

The new Camry is almost identical in size to the previous generation, but through engineering magic, it has more interior space, and an upgraded interior d?cor encompassing soft new contrasting material textures and stitched panels for a more upscale look. 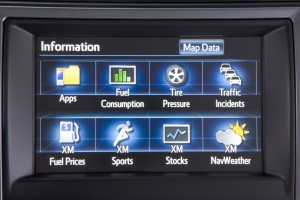 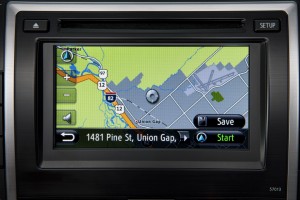 ?? Toyota answered the call for enhanced connectivity with their new Entune system with one of the first applications in the Camry.? The multimedia system pairs up with the driver?s or passenger?s smart phone to offer a broad range of upgradable entertainment, navigation and information services.? The system uses either conversational voice recognition or in-vehicle controls so no interaction with the smart phone is necessary.

Using mobile apps, Entune uses Microsoft Bing to keep navigation continuously up to date with more than 16 million points of interest.? Built into the Entune system are services like OpenTable to make dining reservations or MovieTickets.com. to read movie reviews and buy tickets.? For entertainment, Entune has XM satellite radio, Pandora, iheartradio and HD radio in addition to other easy-to-use services.

The Camry is outfitted with 10 standard airbags and includes a new driver and passenger-side knee airbag to help keep those occupants in their seats in a collision. ??All Camrys feature Toyota?s Star Safety System?, which includes stability control, traction control, anti-lock brakes and some other electronic safety aids.? As part of the communication system, it also has Safety Connect that accesses a call center with a live operator who can dispatch police and emergency vehicles in the event of a crash.? It also tracks stolen vehicle locations to aid the police in recovery.

We especially appreciate the available Blind Spot Monitor that uses radar to warn the driver when another vehicle is in the driver?s blind spot.? Vehicles with one of the display audio systems also include a backup camera. 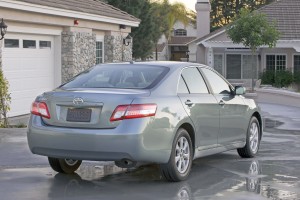 ??? With the Camry?s new French Vanilla looks and enhanced drivability, technology and comfort it appears the Toyota may still have the edge in the tough mid-size sedan market.