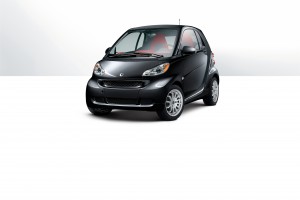 It would seem like a car that?s just a few inches shorter than a Harley Davidson motorcycle might have a stealth quality, but it?s actually just the opposite.? Everywhere we went in the Smart Fortwo Passion Coupe, we could see people looking, and several stopped us in parking lots to ask questions.? That was a surprise to us, especially since they have been on the market for about three years now, and we see them quite often on the roads around Portland, Oregon.

The Smart is certainly a different kind of transportation than what we are used to.? By size alone, the Smart styling is distinctive and it?s further highlighted by a contracting color trim piece (part of the Tridion safety cell) on each side that forms a ?C? on the passenger side and a backward ?C? on the driver?s side.? The body also has a rakish forward sloping orientation.

Entry is a little difficult with the small door and the higher than usual floor level.? The floor level, which is part of the safety design, is significantly higher off the ground than in the average car.

Once inside, the cabin is roomy and business-like with an attractive two-tone dash highlighted with a brushed metal look accenting the vents, steering wheel and a few other places inside the cabin. Sitting in higher than normal position, the driver and passenger have a commanding view of the road, but the rear view is limited by the wide rear roof pillars.? Cargo space, which is above the rear-mounted engine, is tight measuring 7.8 cubic feet to the window line or 12 cubic feet if you stack things to the roof. 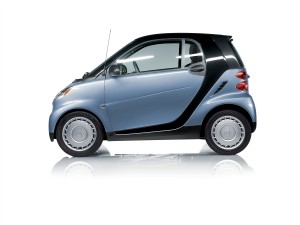 Powered by a 1.0-liter three-cylinder engine tucked under the floor of the rear cargo area, the Smart has the smallest production car engine sold in the U.S. ?The rear mounted engine produces 70 horsepower and drives the rear wheels through the Smart Shift? Transmission, which is classified as a five-speed automated manual transmission or more simply a self-shifting manual transmission.

There is no clutch and the car is manually shifted at the appropriate times by moving the floor-mounted shifter forward to shift up, back to shift down or by using the wheel-mounted shift paddles. ?It can shift automatically, without intervention, but it tends to shift rough, unless the driver modulates the action by letting up on the gas pedal as the shift occurs.

It took nearly a week to for us to feel comfortable with this transmission.? It was difficult to shift smoothly either automatically or manually, and actually required more coordination than using a clutch.? We imagine the transmission will become easier to use with practice, but we both feel it?s the weak link in the car. ?One nice touch, however, is the Hill Start Assist system that prevents the car from rolling back when starting on a hill. ?The Smart is also available with wheel-mounted shift paddles, but only on vehicles without the cruise control option and we think cruise control is a ?must have? in any car.

Acceleration requires some patience with 0 to 60 mph taking 12.8 seconds, but it does have a top speed of 90 mpg.? Where the Smart excels, though, is in fuel economy earning one of the best EPA ratings for a gas powered vehicle, 33 mpg city and 41 mpg highway.? Our actual fuel economy was 36.7 mpg.

The most frequent question we heard about the Smart was about its safety and how this little car would handle a crash.? That was a big concern of the engineers from Mercedes-Benz too, when they designed the Smart, so they created the Tridion safety cell.? Made from high strength steel the cell has longitudinal and transverse members designed to activate the crumple zone of the other vehicle involved in the crash and distribute the impact energy over the car?s body. The front wheels are designed as part of the crumple zone and are supported by the side members during certain impacts. ?The Smart also sits about eight inches higher than comparable small cars moving the occupants above the danger zone in the event of a side-impact collision. 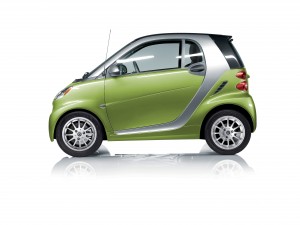 The engine, gas tank and starter battery are housed in impact-protected zones, which provides additional protection to the interior. The rear-mounted engine absorbs impact energy in a targeted manner in the event of a rear crash.

For 2011 the Smart Coupe gets standard knee bolster airbags and window curtain airbags bringing the airbag count to eight. ?In addition it also has stability control and anti-lock brakes.

The Smart is fun to drive, if nothing more, than for the novelty.? It?s nimble scooting around town and down the freeways, easily keeping up with normal traffic.? The size is a little intimidating at first, especially near big trucks or those tall SUVs driving at freeway speeds.? It has a super tight 28.7-foot turning radius which allows you to make some amazing quick turns.

Smart?s biggest assets are its small footprint, which could allow two Smarts to park in the same space required for a normal size car, and the good fuel economy.? The Smart is not a car for everyone, but for the driver that wants something unique, efficient and fun to drive it?s a good choice.? Smart cars are now being sold by selected Mercedes-Benz dealers nationwide.

An electric version of the Smart Fortwo was recently released; we?ll have more on that later.