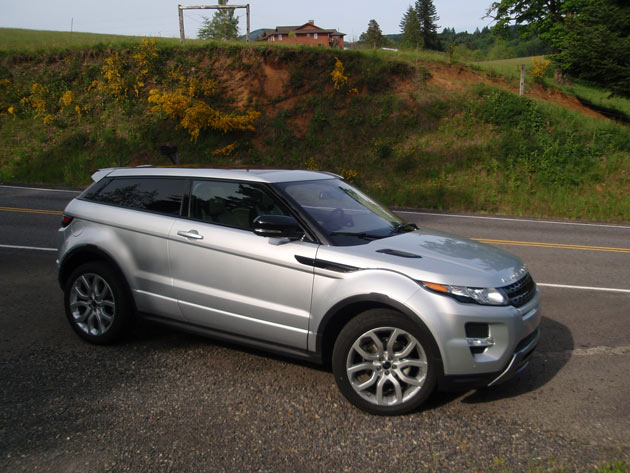 We love it when a carmakers step out of the box and does something that qualifies as unique.? Land Rover?s new Range Rover Evoque certainly wins our top praise for novel products this year.? Furthermore, we aren?t the only fans of the Evoque.? It?s already picked up a handful of important awards including Motor Trend magazine?s SUV of the Year, North American Truck of the Year, Automobile magazines All-Star Award and and the Northwest Press Association?s SUV of the Year.

Land Rover products have become the icons of high-end SUVs with their classic styling, luxurious appointments and off-road abilities, but the Evoque is a little different breed, for several reasons.? The most noticeable difference is the design.? While all the other models look like they might belong on the Serengeti, the Evoque has the look of urban sophistication, like a cool cousin from the city.? 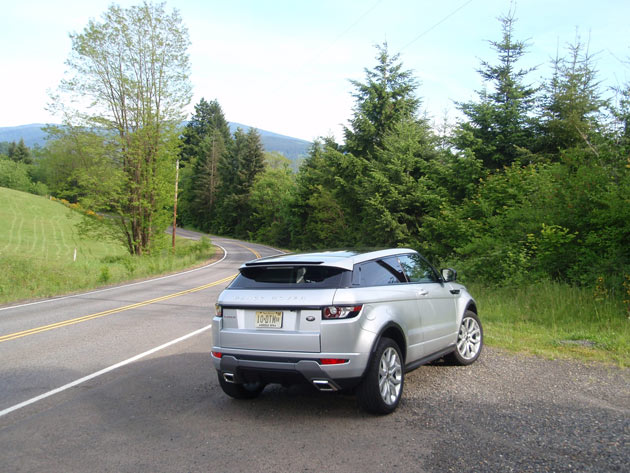 The Range Rover Evoque pioneers several new areas for Land Rover, too.? It is the smallest, lightest and most efficient vehicle they?ve ever built.? Rather than a big V-8 engine under the bonnet (that?s what the British call the hood), a little turbocharged four-cylinder engine powers Evoque.

Derived from the Land Rover LRX concept, first shown in Detroit show in 2008, the Range Rover Evoque follows the unique lines and rear slopping roofline with little deviation from the concept.? Even though it has a presence of a much larger vehicle, the Evoque is small, about 172-inches long, which makes it about the same length as a Jeep Wrangler.? The looks leave no doubt that this vehicle is a Range Rover, but with a new contemporary twist and with no compromise to the elevated driving position.

Available in coupe and five-door configurations, Evoque seats five in comfortable luxury.? The interior looks rich, filled with stitched panels on the dash and door panels along with a tasteful amount of brushed aluminum trim.? The handsomely organized center console and center stack put the controls easily at hand.?? Eye level at the top of the center stack is an eight-inch touch screen used to control climate, audio and phone functions, plus the optional navigation system and cameras.? The Evoque control system doesn?t get caught up in the levels of menus and sub menus used by many manufacturers with similar systems, rather, nearly every system has redundant controls on either the wheel or the center stack in addition to the on screen controls. 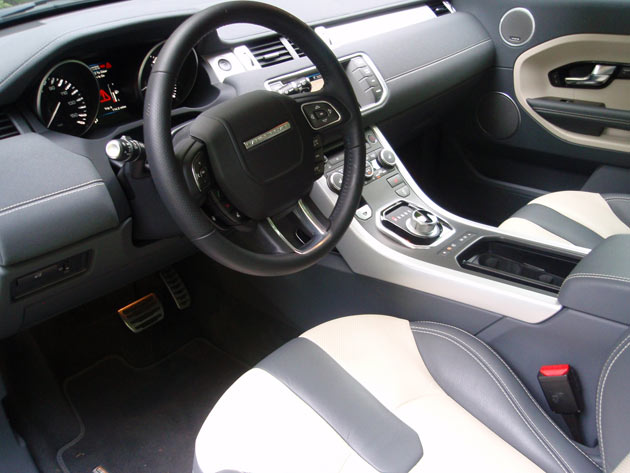 Getting in to drive the Evoque is like a Hollywood production, especially in the dark.? As the driver approaches and hits the key fob, puddle lights shine down from the side mirrors in the shape of a silhouette of the vehicle.? Once inside, the driver pushes the start button and interior displays and ambient lighting activate as in a choreographed start-up sequence, and the solid aluminum shift control rises from the console.? The driver can even select the color scheme, however when the Dynamic drivetrain mode is selected, the color is always — red.

Like all Range Rovers, the Evoque is a full-time all-wheel-drive system with the Terrain Response System. The driver simply presses a button, just to the rear of the shifter, to set the vehicle up for general driving, grass/gravel/snow, mud and ruts or sand.? The system then sets the Evoque up for maximum efficiency in the selected terrain. 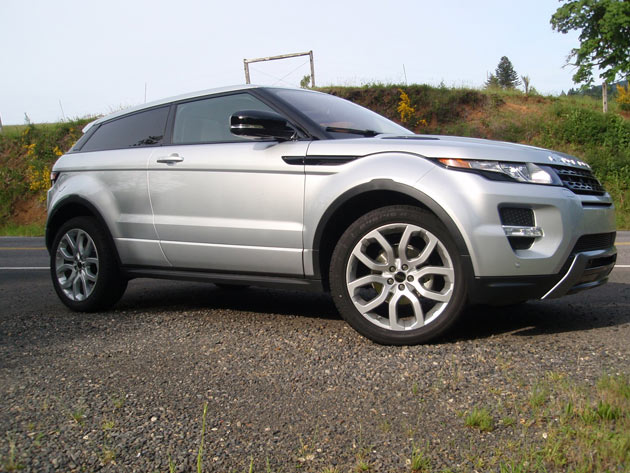 The Evoque is fun to drive with its agile handling and surprisingly responsive drivetrain.? The 240-hp Ford-designed turbocharged engine is 2.0-liter direct injection four-cylinder mated to a six-speed automatic transmission, which can be manually shifted using paddles mounted on the rear of the steering wheel.? As expected, the 3,900-pound Evoque doesn?t have near the performance level of its big brothers, which have big V-8?s, but it?s still impressive with a 0 to 60 mph acceleration time of 7.1 seconds.? It has a top speed limited to 135 mph.? EPA fuel economy estimates are 18 mpg city and 28 mpg highway.? We averaged 23.6 mpg during a week of driving, but with little regard for fuel economy. 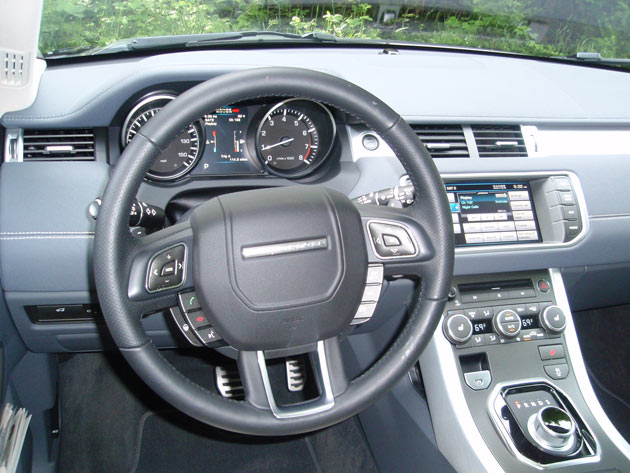 One of the available options, Adaptive Dynamics featuring MagneRide? ($1,250) uses advanced continuously variable magneto-rheological dampers, which is like the magnetic suspensions fitted on some high performance sports cars.? The system reads the vehicle movements at least 1000 times/second, reacting to driver or road inputs virtually instantaneously.

Barbara got a good exposure to Evoque?s off road prowess during the media launch in the Vancouver, British Columbia area.? She actually drove up Whistler ski area?s rugged maintenance roads.? She even got a little snow driving time while at the top of the mountain.? Land Rover people say Evoque doesn?t have quite the off-road capabilities as its bigger brothers, but it can certainly handle anything we would ever do and it goes far beyond the capabilities of most SUVs.

Evoque comes in three design themes: Pure which is cleaner, more contemporary and elegant; Prestige with is more luxurious; and Dynamic with its sportier look and functions.

We have a few pet peeves about the Evoque including the lack of passenger assist handles, sun visor extensions or height adjustments on the shoulder belts.? Nevertheless, we think the Evoque is a perfect addition to the Land Rover lineup especially with its unique styling, very good fuel economy and fun to drive characteristics. 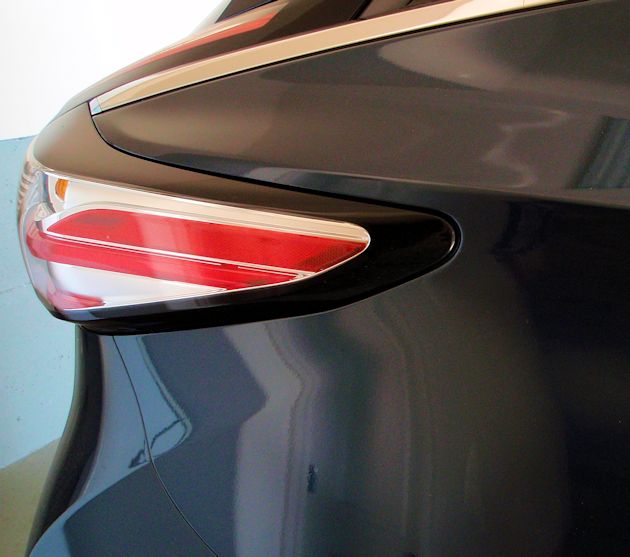 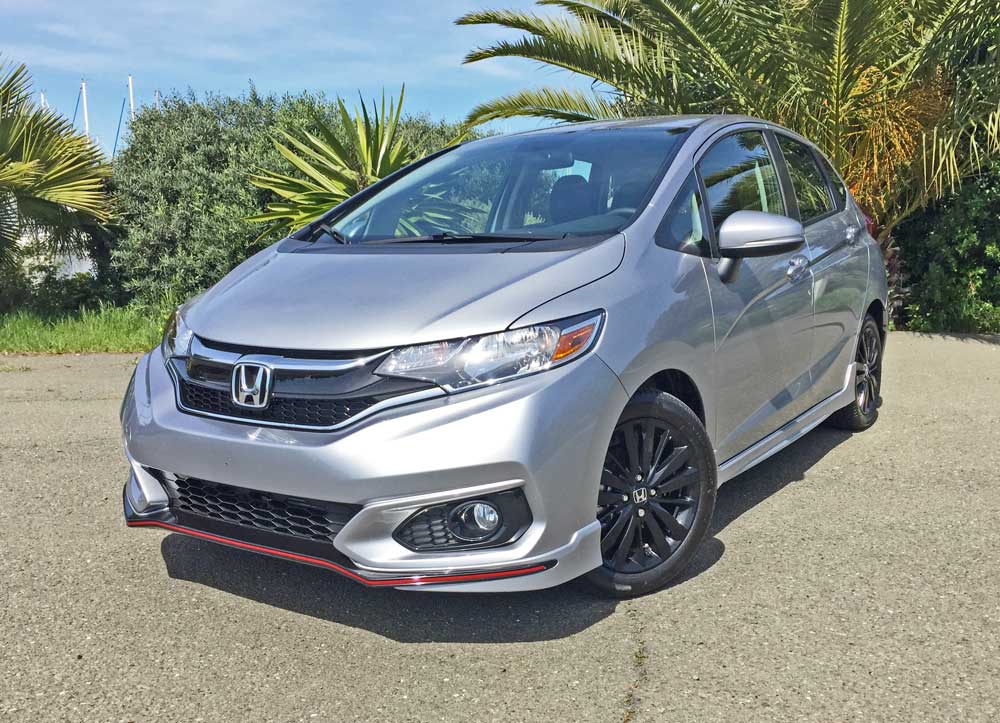