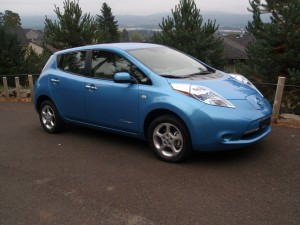 Electric cars have been one of the hottest topics in the automotive news over the last couple of years and we?ve had a chance to drive many of them for limited periods.? For a more real-world exposure, we recently spent a week at home with the all-electric Nissan Leaf, and under certain circumstances, we could see ourselves driving this car on an everyday basis.

For example, most of our driving is in the area grocery shopping, running errands and going to the doctor?s office.? That kind of driving is easily within the range of one battery charge. Also, we fly a lot in our work, and a round trip to Portland International would be easy, but it would be nice if we could leave the car on the charger while we are gone for two or three days.? Unfortunately, it would have to be a valeted spot so there was someone there to take it off the charger to make room for another electric car.? So far, it doesn?t exist, but the day is early.?

If we had to commute to work, in downtown Portland, Ore. and didn?t use the car for daily business, it would be great too.? We could easily make the 50-mile round trip without a charge.? It would be much better if we could park near one of the several fast chargers in Portland.? That would give us the security of a full charge for the drive home in case we needed to go other places on the way home. 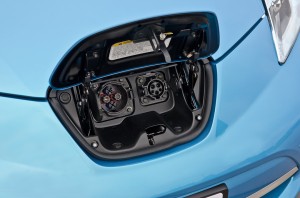 Driving the new electric Nissan Leaf was no different than driving any other midsize sedan, except first you need to unplug the charger.? Simply slip behind the wheel into the somewhat futuristic looking interior with the key fob in hand, do all the normal buckling and adjusting then push the start button.? A series of pleasant audio cues chime and dash lights come alive.

The instrument panel automatically displays the available range in miles.? In seconds, the Leaf is ready to go.? The shifter is a computer mouse-like device mounted on a raised section between the front seats.? Moving the shifter to the side then back puts the Leaf in a forward mode.

Initially, there is a slight whirring sound from the engine compartment as the Leaf starts to move, but the sound quickly disappears as the accelerator pedal is pressed and the Leaf responds by accelerating quickly. 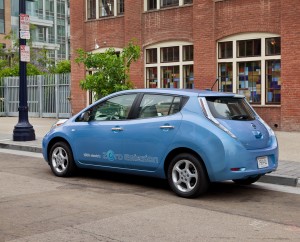 Settling into the traffic flow at about 65 mph, the Leaf feels solid ? almost heavy, but still agile.? There is almost no noise created by the drivetrain and that presented a new challenge for the engineering department.? They discovered considerable noise created by the wind flowing around protrusions like side-view mirrors and the radio antenna.? As a result, they developed new shapes to cut those noises including a bulbous headlight design to divert wind flow around the mirrors.

The car feels well planted, with just a little body roll on the corners and a slightly muted feel from the speed-sensitive electric power steering.

The Leaf has all the electronic safety equipment found on most cars including four-wheel anti-lock brakes, electronic brake force distribution and brake assist.? It also has Vehicle Dynamics Control and traction control.? Keeping with the all-electric motif, the Leaf uses an electronic parking brake, too.

The seven-inch navigation screen not only helps keep the driver on course and to locate points of interest, it also shows the driving range and charge stations within range.? The data is updated automatically through an Internet connection.?? The system displays and records information about energy usage with daily, monthly and annual reports of distances traveled and average energy consumption.? Then it compares efficiency levels with all other Leaf drivers and grows a digital pine tree on the charge display as a graphic display of your ?eco? driving behavior.? It?s like getting a gold star for doing something good. 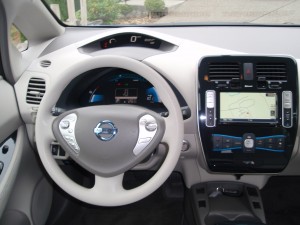 It?s also possible to communicate with the Leaf through a smart phone app which can check battery status, program charging and activate heating and air conditioning systems before you arrive at the car.

An 80 kW synchronous electric motor, powered by a 24kWh lithium-ion battery, drives the front wheels of the Leaf.? To those of us that still think in horsepower and torque, that is the equivalent of 107 horsepower and lots of torque (207-lb.ft.).? It will accelerate from 0 to 60 mph in less than 10 seconds and is especially quick from 0 to 35 mph.? The battery has enough power when fully charged to drive the Leaf for about 85 to 100 miles and as they say in the fine print — your mileage may vary, especially if you drive fast.? In the worst conditions, the range might be cut to 67 miles or in perfect conditions, it could make about 130 miles. 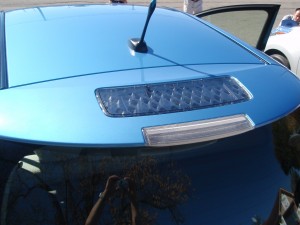 The base Nissan Leaf SV model sells for $36,050, including the destination charge.? It includes features like the navigation system, Bluetooth, cruise control and heated front and rear seats plus a heated steering wheel.? An Electric Vehicle tax credit could reduce that price by up to $7,500, plus there are other government and private incentives that can reduce the prices even more.? The upper level SL, adds a new quick charge port that gives the battery an 80 percent charge in only 30 minutes.? The $2,050 upgrade also adds a spoiler with small solar panel, and rearview monitor along with a few more convenience features.

The Leaf comes with a 110-volt charger that takes about 15 hours for a full charge.? It is best used for times like when you?re at grandma?s house for Thanksgiving and there is no charger available.? Most owners will install the optional 220-volt charger at their home.? It takes about seven or eight hours for a full charge.? This system costs about $2,200 for a home installation and requires about $3 worth of electricity for a ?fill?. 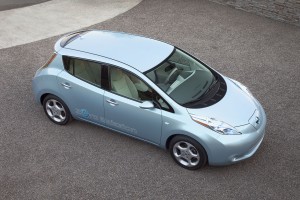