The Original 4-Door Coupe On Steroids 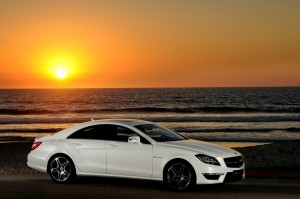 Rancho Santa Fe, Calif. — Helen of Troy may have been the face that launched a thousand ships into battle, but the Mercedes-Benz CLS was the face that launched hundreds of thousands of cars.? The Mercedes CLS made design history in 2006 (2004 in Europe and South America) when it created the swept back roof line that was marketed as a ?four-door coupe?.? In succeeding years the roofline was emulated by more than a dozen other automakers, but none captured the full essence of the CLS.

The fall of 2010 brought a new generation of the sexy four-door and early in 2011, the 2012 version of the CLS 63 AMG performance model debuted producing perfect 10s in the ?Wow Factor? rating. 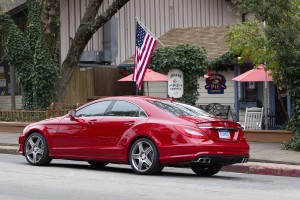 It?s hard to know where to start talking about the CLS 63 AMG with all the outstanding features.? By looks alone this car is a winner, but I have to admit, I like the original a little better.? The new CLS has taken on a little more pumped-up muscular look, but the sleeker styling of the original better fits my styling bias.

When it comes to handling and performance, it?s hard for anything to beat the CLS AMG.? At full acceleration the car is so strong, it literally pulls back the loose skin on your face. ?Numerically, that?s accelerating from 0 to 60 mph in 3.9 seconds, according AutoWeek magazine tests.? Those are numbers in the same league as cars with names like Bentley, Ferrari, Aston Martin and Porsche. ?What?s even more interesting is that it does the same thing when you floor it at 50 miles per hour to pass a slow moving car.? That?s another amazing Wow Factor. 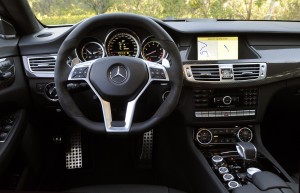 Gone from the 2012 model is the 6.3-liter naturally aspired V-8, replaced by a new 5.5-liter bi-turbo V-8 rated at 550-hp and 590-lb.ft. of torque when equipped with the performance package.? Without that package, it?s only 518 horsepower. ??It is attached to the AMG Speedshift seven-speed automatic transmission, which pops shifts at lightening speeds.? It also has a very impressive manual shifting mechanism that allows the driver more control, however, the automatic on its own is always more efficient.

The new engine is a couple of tenths of a second faster than the previous engine from 0 to 60, but the big difference is the fuel economy, which is 32 percent better at 16 mpg city and 21 mpg highway.

Fuel economy improvements come from several engine innovations including a direct injection system, smaller displacement engine, turbocharging technologies and the automatic stop/start system that shuts the engine down quickly at stoplights and starts it again when the accelerator is pressed. ?The stop/start system is only active when the car is in the drivetrain dynamics ?C? mode. 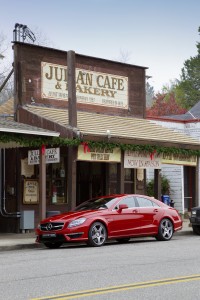 The CLS AMG driver has the ability to choose drivetrain dynamics by selecting one of four drive modes from the AMG drive switch on the center console.? Every time the switch is changed from the ?C? (Controlled Efficiency) mode to the ?S? to the ?S+? to the ?M? the dynamics get a little more extreme to the point where it starts to take on the feel of a pure track car.

Anyone who can feel turbo lag with this engine is a whole lot more sensitive than me ? I couldn?t feel the slightest hesitation when punching the accelerator, only the G-force pushing me back in the seat.? The 6.3-liter engine was noted for the great sound…this new engine is just as good, or maybe better.

Mercedes doesn?t mess around with handling either, this car goes exactly where the driver points it with precision, thanks to the AMG electronically control sport suspension and damping system.? It also has a new front axle and electromechanical AMG sport steering.? This kind of performance needs good brakes and the AMG ceramic brakes are the kind that when pushed hard, stop the car on the proverbial dime, but your skin keeps going.

The price for such luxury, styling and performance starts at $99,925 and includes a high level of standard equipment and the legendary Mercedes technologies.? Several option packages and a few stand-alone extras quickly jump the loaded price to $124,000.

The Mercedes-Benz CLS 63 AMG is one of those rare cars that does everything exceptionally well.? The only weakness I could find was the tight quarters in the rear seat, but if someone wants to carry someone in comfort they should consider the S-Class Mercedes.?

Described in three words I would say ?Wow, Wow and Wow!? 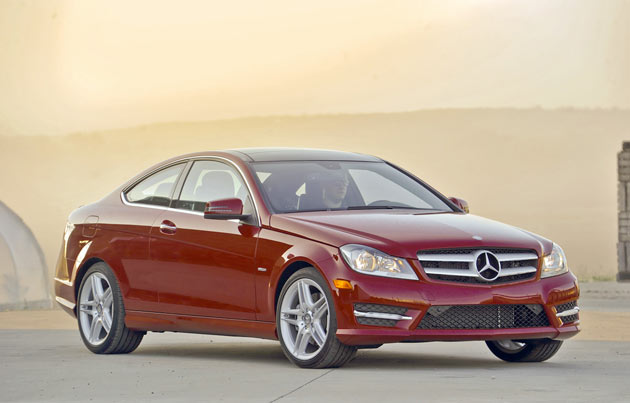