It had been nearly three years since we had driven a Lincoln MKZ, so we were anxious to see where Ford had taken this midsize sedan.? The MKZ was refreshed this year with a long list of new driver aids like adaptive HID headlights, rain sensor wipers and a new instrument panel with the next generation Lincoln center stack.

The MKZ offers a unique Blind Spot Information System (BLIS?) with Cross Traffic Alert (CTA).? Like other blind spot warning systems, BLIS identifies when another vehicle is in the driver?s blind spot on the highway.? The CTA takes the system a useful step forward by using the BLIS radar sensors to alert the driver of approaching traffic while in reverse and backing out of a parking spot. ?CTA tracks up to 65 feet on either side of the vehicle and warns the driver through both audible and visual alerts. It is a great device that adds another level of safety to the backup camera system.

With the new bold Lincoln family grille and new rear decklid, the MKZ styling is starting to take on a little Lincoln personality so it won?t get lost as easily in the crowd of midsize sedans. 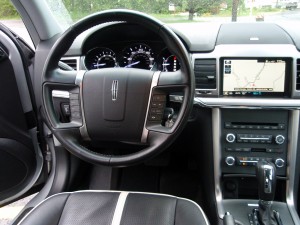 Inside, the new premium Bridge of Weir perforated leather seats are very comfortable and attractive, but we thought the thin white strip running down the middle of the seat distracted from an otherwise good design. In general, the interior didn?t give us the impression we were in a luxury car.

The MKZ is powered by a 263-hp, 3.5-liter V-6 engine with a new six-speed automatic.? The new Aisin transmission produces quick, smooth shifts automatically or manually with the new shift linkage that has the same configuration as the BMW automatics ? push the shifter forward for a downshift or pull back to shift up. ?MKZ is available in front-wheel drive or the optional all-wheel drive.

Thanks to some retuning, the MKZ 0 to 60 mph acceleration times improved from 7.7 seconds to 7.1 according to manufacturer estimates.? The AWD version is rated at 17 mpg city and 24 mpg highway according to the EPA estimates, and the FWD version is 18/27 mpg.? A hybrid model will be available in the fall of 2010 with projected fuel economy at 41 mpg city and 36 mpg highway, which could put it at the head pack for luxury sedans.

The MKZ has a very rigid body structure and offers a comfortable ride and the quiet interior we expect from a Lincoln.? It also drives well and will reward the driver with a sporty experience, but don?t expect to keep up with cars like the BMW 3 Series, Audi A4 or Infiniti G37. 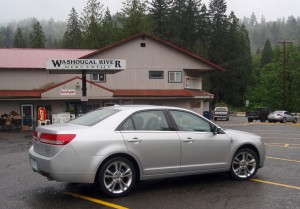 MKZ pricing starts at $34,965 for the front-wheel drive and $36,860 for the AWD.? Lincoln planners have simplified the ordering process with rapid spec equipment packages that include a technology package, navigation package or the ultimate package, which includes the technology and navigation plus other enhancements.? Ordering all the options can take the price to nearly $45,000.

As well as Ford is doing with many of the vehicles in their lineup, the Lincoln brand still sits in a precarious position.? We think part of the reason is that customers are still having trouble associating vehicles with names.

The other problem is the MKZ, MKX and MKS are too similar to the Ford vehicles they were derived from.? The bold design of the MKT is never going to be confused with Ford Flex, however, and we hope when the dust settles at Ford that we see even more Lincoln personality shinny through.