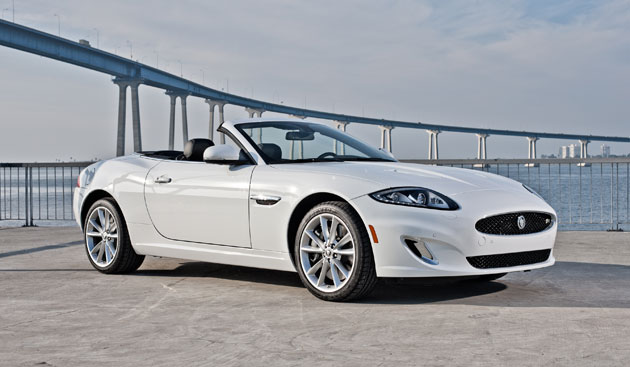 The word ?iconic? has been bantered about a lot recently, and we think if any one car deserves that title it is the Jaguar XK. ?From the roots of the car that defined the ?sports car?, the Jaguar XKE, the new XK brings new levels of style and performance to what is currently the British brand?s only topless entry (at least until the Type F arrives in 2013).

The XJ cars all have the classic long bonnet styling that started in the early 1960s with the original XKE or E-Type sports car.? Although always admired for their styling and performance, the Jaguar brand suffered from a terrible reputation for quality and dependability.? In recent years after the brand was purchased by Ford Motor Company and then later Tata Motors, Jaguar has become one of the top-rated brands for quality and dependability.??

We recently spent a week tooling around in the head-turning luxury of an Italian Racing Red Jaguar?XK-R Convertible.? A big part of the enjoyment for all these cars is the prominent aural sensation from the deep-throated exhaust note.? The sound is especially enhanced in the Convertible with the top down. 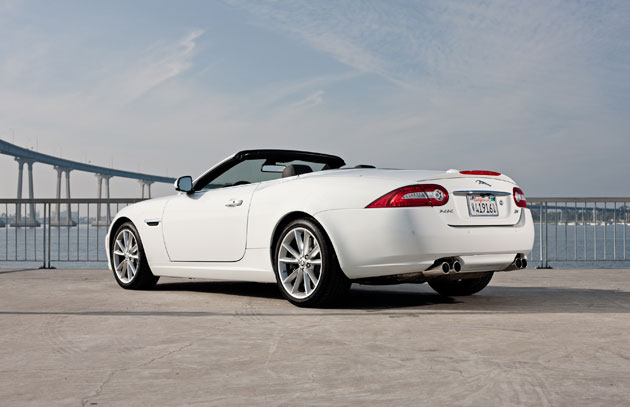 We feel privileged each time we get to drive one of the new Jaguars, because the cars have an elegant, even regal aura that makes us feel special just being in one.? The XK sports cars are available in three different models ? XK, XKR and XKR-S, each with an enhanced level of performance going from fast to super-fast to OMG!!.

With its supercharged 510-hp, 5.0-liter V-8 engine, the XKR runs with the big boys making a 0 to 60 mph run in a mere 4.6 seconds.?? We actually prefer the more sedate non-supercharged version that is rated at 385-hp, which is almost as fast with a 0 to 60 mph time of 5.2 seconds.? Fuel economy for the two engines is 15/22 mpg for the supercharged version and 17/25 mpg for the naturally aspirated version.? For someone who wants even more, the limited edition XKR-S ups the power to 550 hp and drops the 0 to 60 mph time to 4.2 seconds and increases for the 155 mph governed top speed to 186 mph with the same 15/22 mpg fuel economy.

The Jaguar XKR convertible is priced for lottery winners, successful doctors and hedge fund managers at $104,375 including destination charge.? If you add the performance seat package, 20-inch Tokoba wheels, adaptive cruise control and a couple of other cosmetic upgrades like our test car came with ?the price tops $116,000. ?The XK convertible is $91,375 and the XKR-S convertible is $138,875.? For shoppers looking to cut corners, the coupe is $6,000 less for each model. 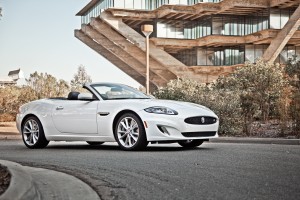 We remember when convertibles traditionally had a little extra flex and shake, but that?s certainly not the case with the XK.? The body and frame are exceptionally rigid, and if there is any body twist, cowl shake or rattles, we couldn?t find them even on some of our rougher roads.

Top up, the XKR?s suede cloth lined and insulated cloth top keeps the interior nearly as quiet as the coupe.? In 18 seconds, the top folds neatly into the rear bodywork leaving no unsightly bulge.? With the top down, we were pleasantly surprised to have only light wind and that we could still talk without hollering, even at highway speeds.? There are also no conspicuous roll bars, rather they are hidden behind the rear seat armed to deploy instantly if needed.

We both like the controls, which are unique in the business for their lack of traditional shifter.? Instead, when the driver pushes the start/stop button on the console, a large silver knob called the JaguarDrive Selector?, rises out of the center console into the driver?s hand.? Twist the dial to the appropriate gear and the six-speed ZF automatic transmission does its magic.? When the driver wants to get more involved, wheel-mounted shifter paddles make quick smooth shifts. 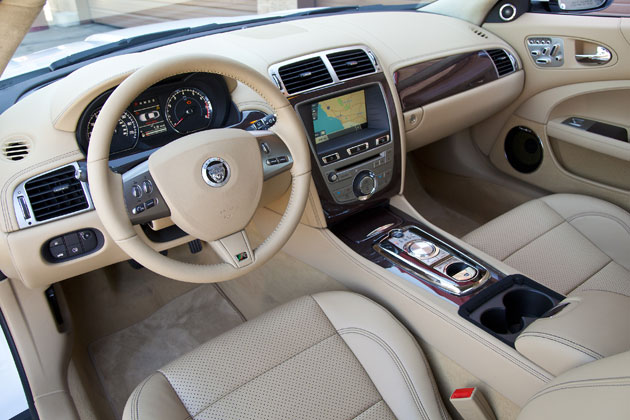 Most of the other controls are easily activated on the touch screen at the top of the center stack.?? We are spoiled by the fast responses of touch screens like the iPhones, so we thought the touch screen responses on the Jaguar system were a little slow and the menu structure was somewhat complex.

It?s also outfitted with a new Adaptive Dynamics (AD) system that goes way beyond previous two-stage system.? AD provides a continuous variable damping that runs the spectrum from full comfort to total control for maximum handling and grip ? and it works!

For even better response, the driver can push the button with a checkered flag symbol to activate the JaguarDrive Control? interface.? This changes the engine management to a quicker accelerator pedal and transmission shifts.? It also tells the AD to tighten the suspension damping for a sportier feel. Then it?s a matter of holding on tightly and looking way down the road (front and back), before tromping on the accelerator. 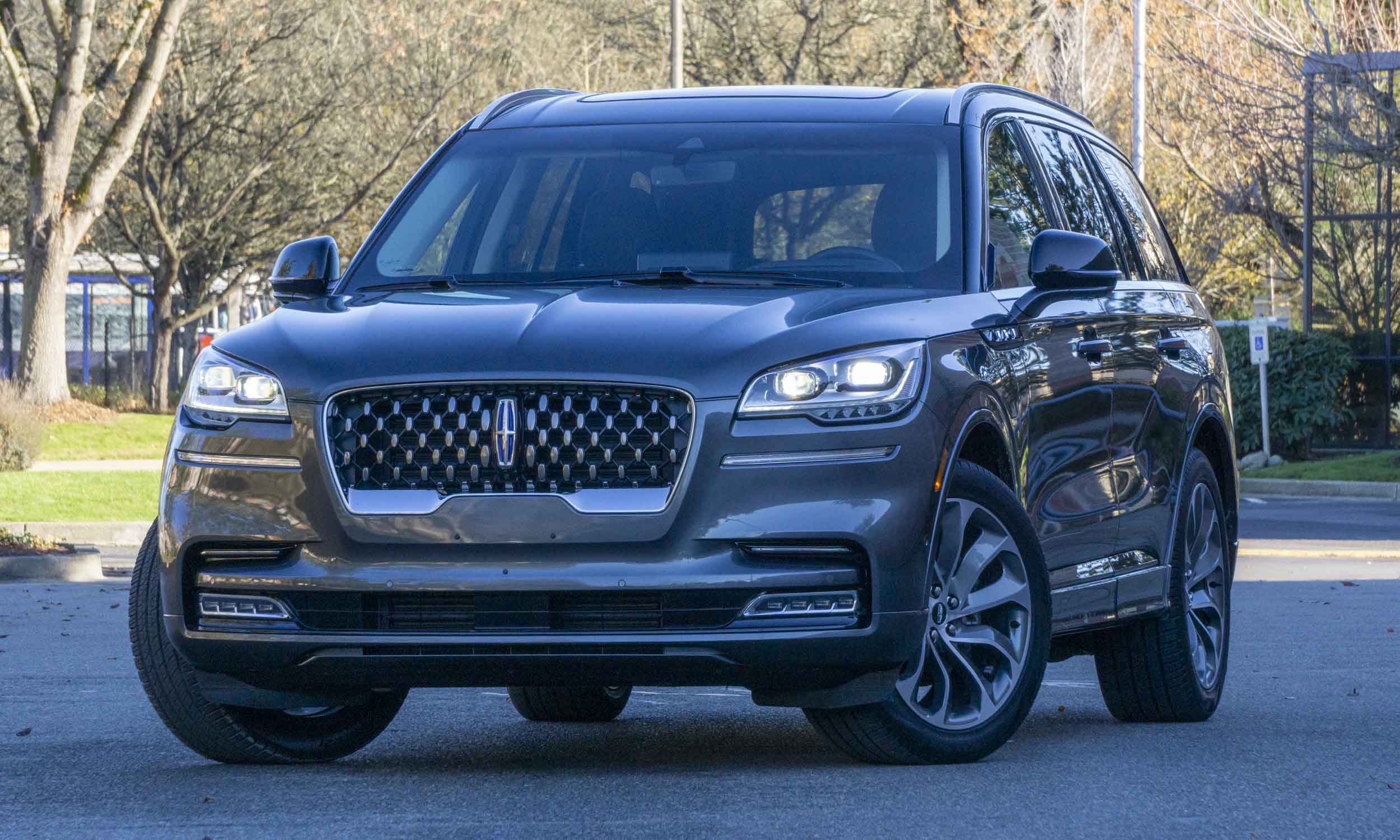 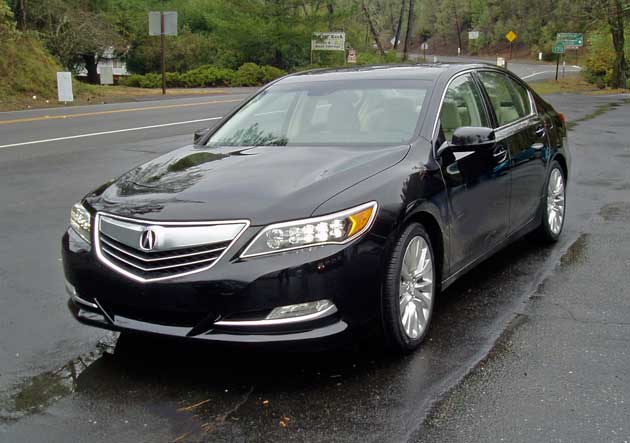