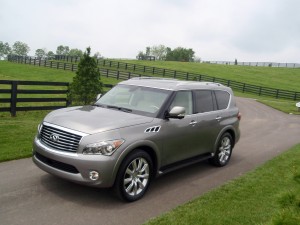 With ?a 400-hp (up 60 hp from last year), 5.6-liter V-8 engine, the QX has no shortage of power and proves it by making zero to 60 mph runs in just under 7 seconds.? The new V-8 gets much of its power boost from the Infiniti Variable Valve Event & Lift (VVEL) technology and the efficiency of the Direct Injection Gasoline (DIG?) system.? Power transfers to the rear wheels, or all four wheels, through Infiniti?s new seven-speed automatic transmission. The fuel economy is 14 percent better than the previous engine at 14 mpg city and 20 mpg highway. 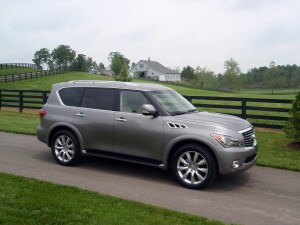 For owners with the need to pull a trailer, the QX handles up to 8,500 pounds, when properly equipped.? To provide the best stability and handling characteristics for towing and cornering, the QX Deluxe Touring package includes a new Hydraulic Motion Control System that helps reduce body lean by transferring hydraulic fluid from one side of the vehicle to the other to counteract body lean and keeping the vehicle flat.? The system is combined with the double-wishbone four-wheel independent suspension system to maintain a uniform ground clearance and departure angle even when towing or loaded with cargo. 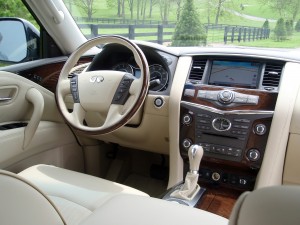 Where the QX56 really shines is in the interior, where the owners spend their time.? It is filled with soft leathers, high quality faux wood and same kind of accoutrements you might expect to find in a corporate jet.? It also comes with a high level of standard equipment like leather seating, auto dimming bi-Xenon headlights, 13-speaker Bose audio, 9.3GB Music Box? hard disk drive and even a navigation system. ?The navigation system includes real-time traffic and weather information and the Zagat Survey? restaurant guide.

One of the new standard safety features I particularly liked is the Around View? monitor that displays a virtual 360-degree view around the vehicle.? It is especially helpful for parking and could be handy when going through tight areas in the woods or a parking lot.

The QX56 is available in one very-well equipped model, with a choice of two- or four-wheel drive.? Prices start at $57,565 for the two-wheel drive and $60,665 for the four-wheel drive. ?Selecting the technology, theater and touring packages adds about $11,000 to the price and certainly adds extra icing on the cake with useful driver aids like distance control, lane departure warning and adaptive front lighting.

During a drive through the rolling hills of horse country near Louisville, I tried the innovative Distance Control Assist (DCA) that works even when cruise control is not engaged.? The DCA automatically applies the brakes when a vehicle starts to slow in front of the QX and prompts the driver to release the throttle.? It?s an amazing safety feature that should help avoid rear end collisions.

Sure, the QX is gussied up truck, but it has the attributes of a luxury sedan with super comfortable seats, a quiet cabin and controlled ride. 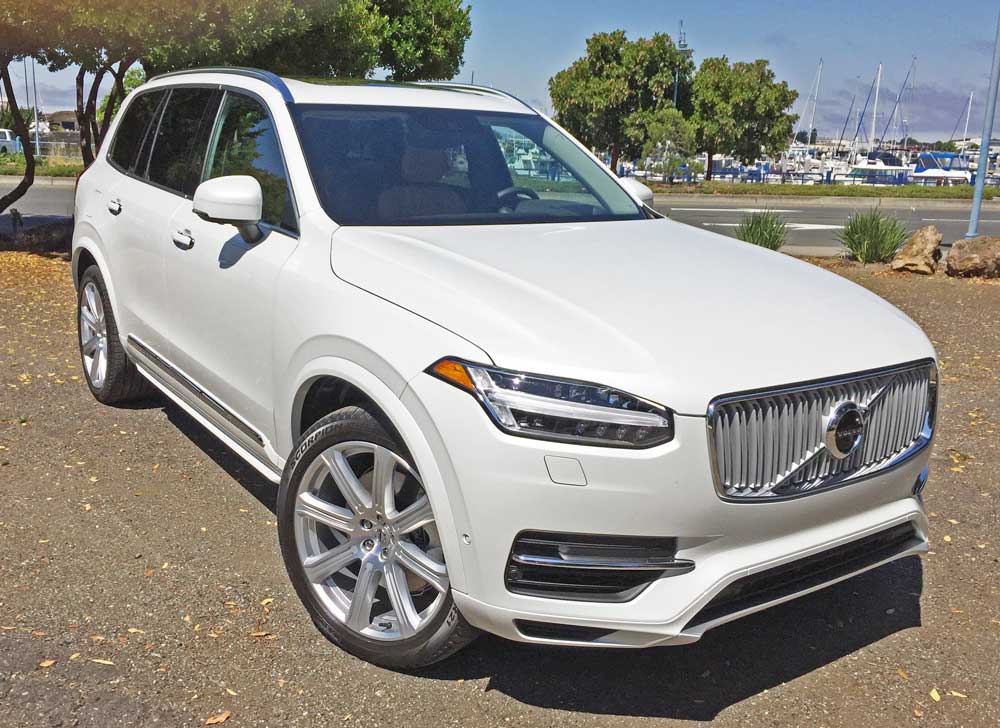