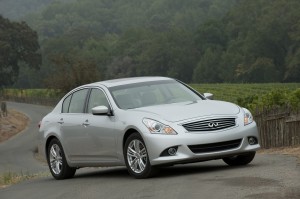 Monterey Bay, Calif. ? People often ask me what my favorite car is out of the hundred or so I drive each year??? The one that most often comes to mind is the Infiniti G37.? Over the years, the mid-size luxury sedan has impressed me with its high level of quality, styling, performance and value and it just keep getting better and better and like everything else the price moves up.

I recently spent a week driving the G25 Journey, which is the middle of the trim levels available.? It is also available in the base and theG25x, the all-wheel version.? The Journey has all the same features as the G25x except for the AWD model, which is an additional $1,600 more. 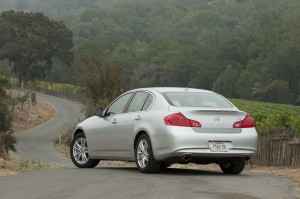 The G25 engine is a little 2.5-liter V-6 which drives the rear wheels through a silky smooth seven-speed automatic transmission. ??It has EPA economy rating of 20 mpg city and 29 highway, which is about two miles per gallon better than the G37.

The G37 is impressively fast, running a 0 to 60 mph acceleration time in 5.1 seconds; while the G25 takes about 8.0 seconds, which is plenty, fast for me.? During my week in an even mix of city and highway driving around the Monterey Bay area, I averaged 29.2 mpg with my good driving habits.? Yes, good driving habits make a difference; my husband, Bill, would probably average about 25 mpg with his more aggressive driving.

I don?t have a desire to beat BMWs, Audis and Mercedes-Benzes away from stoplights, which the G37 will do.? Instead, I had a car that easily handles the kind of day-to-day driving I do.? What I look for in a car is smoothness, quiet, comfort and good styling and the G25 covers all those bases. 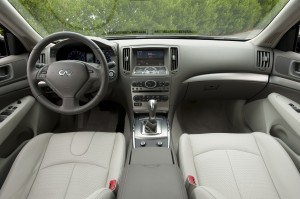 ?? I confess that all the well-equipped cars we drive spoil me.? My tastes and my ?must have? list includes features like heated seats, rear-view camera, satellite radio and Xenon headlights, which the G25 does have.? However, other features that are important to me like built-in navigation system, active cruise control and blind spot warning, are not available on the G25 ? navigation is available on the G37. ?However, the other features are available as part of a Technology Package on the larger Infiniti M37 sedan.

I like the clean distinctive lines of the G25 with its long, wave-like hood and powerful stance.? I don?t like to drive a night, but when I do, I appreciate the High Intensity Discharge headlights that are standard on the G25.

The G25 interior has abundant luxury touches like leather seating, Bose audio and all power equipment.? I especially like the Japanese interior design cues with features like the ?Shodo? aluminum trim that?s inspired by Japanese calligraphy and the other ?modern warmth? design features.

While my husband, Bill, and I might debate about the need for the horsepower of the larger G37, I think the smaller engine option is a nice alternative.? The only downside I could find is that the engine is not available in the G Coupe, which I like even better than the sedan.? I think the G37 coupe is one of the best-looking cars on the market. ?? ??????????? 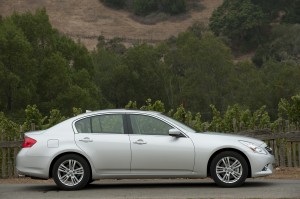