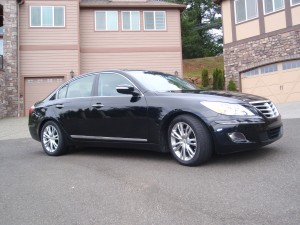 Luxury and sport sedans tend to be high on our list of the cars we?d like to have in our own garage.? Who can argue with the practicality, luxury and performance of a car like the Mercedes E-Class, BMW 5 Series, Cadillac CTS, Infiniti M or any of a dozen others?

However, most people would never think of adding a Hyundai to that esteem group, but then again, most people haven?t driven the Hyundai Genesis 4.6.

On its maiden voyage to the U.S. market in 2009 the Genesis was a surprise winner of the prestigious North American Car of the Year award, plus it has received positive reviews from a multitude of the buff magazines.

About the same size as its competitors, the Genesis styling is clean and simple, but lacks the cutting edge exterior styling displayed by its smaller siblings, the Hyundai Sonata, Elantra sedans and the Genesis coupe.? We are hoping that changes with the next iteration.

The interior, on the other hand, is exceptionally uncluttered with a broad expanse of wood trim on the dash, ergonomically efficient control placement with a strong feeling of understated elegance and quality.

Building from its exclusive rear-wheel drive architecture the Genesis is the first rear-drive Hyundai in the U.S. market. ?With near perfect 52/48 front-to-rear weight distribution and coupled with a refined front and rear independent suspension, the Genesis sedan has an excellent blend of ride quality and handling characteristics, making it very much a driver?s car, or at least for all but the most exuberant drivers. 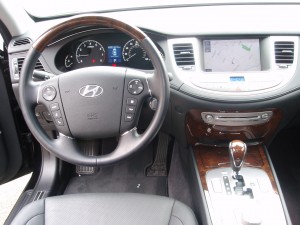 The Genesis comes in two engine-defined versions, a 3.8-liter V-6 model and the 4.6-liter V-8, which we drove. ?The high-value V-6 version produces 290-hp and it is rated as an Ultra-Low Emission Vehicle.? It gets an EPA rating of 18 mpg city and 27 mpg highway and has a 0 to 60 mph acceleration time of 5.8 seconds.

The Hyundai designed and built Tau? V-8 engine was upgraded for 2011, now offering 378 horsepower using regular fuel and 385 horsepower on premium fuel.? The engine has been rated as one of the Ward?s Auto 10 best engines of the last two years. The V-8 engine produces a 0 to 60 mph time of 5.3 seconds — an improvement of 0.4 seconds from the 2010 version.? Fuel economy is rated at 17 mpg city and 25 mpg highway. ?We actually averaged 22.7 mpg during our week behind the wheel.

Both engines are mated with six-speed automatic transmissions* with Shiftronic sequential shifting for better driver control.? The V-6 get the smooth and responsive Aisin? while the more powerful Tau V-8 uses an enhanced ZF six-speed, designed to handle the extra torque. 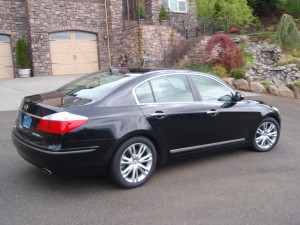 If someone could do a blind drive test, as we do when doing a blind tasting of wines, coffees or sodas, we think all but the most discerning drivers would not be able to differentiate between the Genesis and most of the other big name sport sedans.? The car is impressive on the highway and on mountain roads alike, not quite at the same level of the three German sedans but not far off the pace.? When it comes to what we do most, drive on a freeway or around town, the Genesis is on par with the others.? The ride and comfort is first class.

Where the Genesis beats the competition, hands down, is in value.? The very well equipped V-6 Genesis has a base price of $33,000, while the V-8 powered 4.6 is $43,000 with one of the most impressive list of standard features we?ve seen.? Options?? The Genesis 4.6 pricing shows only three.? An iPod cable, cargo tray and wheel locks when combined add $185 to the total price.

Many people buy a luxury or sport sedan because they want to impress their neighbors.? People who buy a Hyundai Genesis 4.6 will probably only impress themselves.? That all could change in the future as the product gets further refinement and recognition.

Already the refinement is starting with the introduction of the 2012 5.0 R-Spec model that just went on sale.? With 429 horsepower and changes to the suspension, it promises a completely new level of performance for Genesis.

*This review was of the 2011 model.? All the 2012 models that are on sale soon have the new Hyundai developed eight-speed automatic transmission. 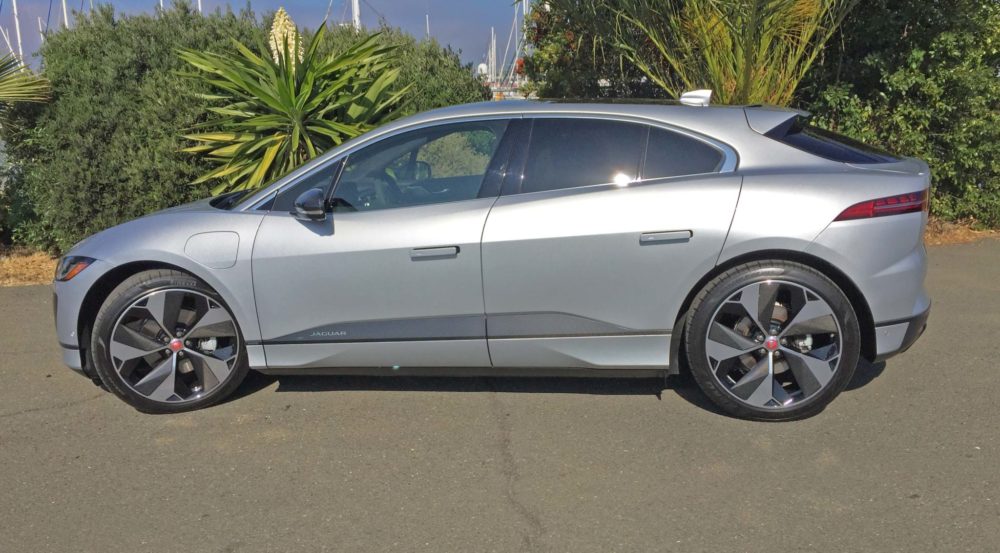