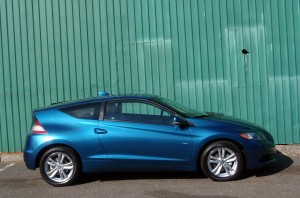 If we didn?t know better, we?d think the new Honda CR-Z was having schizophrenic tendencies, or at the very least, an identity crisis. After all, who has heard of a car that boasts being green and sporty and efficient and quick?

The CR-Z was a gutsy move for Honda to make, because this car doesn?t fit in any of the conventional categories or niches, so they weren?t sure how it would be accepted by consumers. ?Moreover, Honda hasn?t been overly successful with hybrids, let alone another one with just two seats — remember the original Honda Insight hybrid (1999 to 2006) was panned because it only sat two.? It didn?t exactly sell like hotcakes, it sold more like liver and eggs.? That was too bad, because it was kind of a neat little car and it got amazing fuel economy — 61 mpg in city driving and 70 mpg on the highway.

The CR-Z has great styling, looking something like an updated version of the legendary Civic CRX, which was ?the? popular sport compact in the mid to late 1980s.

Meanwhile back at the identity crisis.? Honda has made it convenient for the driver to choose what he or she wants the little CR-Z to be.? Mounted to the far left of the instrument panel, right next to the door, are three large square buttons labeled ?Sport?, ?Normal? and ?Econ?.? To encourage use of the ?Econ? button, they made it green with a plant graphic. 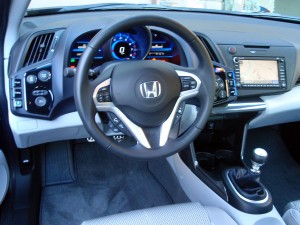 Press any of the buttons, and you can feel a difference in how the car responds.? For example, the ?Sport? button illuminates a red 3-D ring on the tachometer then enhances performance by making the throttle more responsive, the electric power steering a little tighter and adding more assistance from the electric motor to improve acceleration.

Pressing the ?Econ? button changes the engine management for improved efficiency, reduces the air conditioning output and potentially activates the engine idle stop sooner.? The tachometer ring changes somewhere in the blue to green range, and the more green it gets, the more efficient you are driving.? It also has a feature similar to the latest generation Honda Insight that makes a game out of trying to drive more efficiently.? For everyday driving, the ?Normal? button balances between the two other settings. 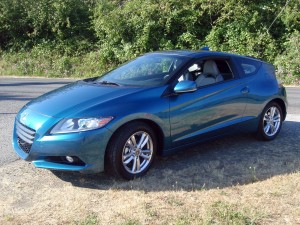 Under the sloped CR-Z hood is the sixth generation Honda IMA (Integrated Motor Assist) system.? Power comes from a sophisticated 122-hp 1.5-liter SOHC four-cylinder engine, assisted by a 10-kilowatt DC brushless electric motor.? The electric motor also acts as a generator when the car is braking or coasting.? The CR-Z is a not a full hybrid, which means it never runs off the electric motor alone.? When the car is stopped for a traffic signal or to chat with a buddy, for example, the IMA system also shuts down the engine to save fuel.? Step on the gas, and it restarts, automatically.

We recommend the six-speed manual transmission for drivers with a ?Sport? button driving style. The ?Sport? mode driver will have a lot more fun, making jackrabbit starts, running the tachometer up to redline and making the 0 to 60 mph runs in a respectable 8.3 seconds.? We drove the EX model with the manual transmission, spending most our time on the ?Sport? setting, having fun and testing the various button settings to achieve an actual mileage of 29.6 mpg. ?With Barbara driving a majority of the time, we would likely get at least 10 mpg better.

Drivers with a ?Normal? and ?Econ? mindset will be more comfortable with the optional ($650) and more fuel efficient CVT (Continuously Variable Transmission). ?The CVT, however, is made sportier with standard wheel-mounted paddle shifters simulating a seven-speed transmission.

Drivers taking advantage of the ?Econ? features and the CVT should be rewarded with 35 mpg in city driving and 39 mpg on the highway, or better, and the fifth best combined fuel economy available according to EPA estimates. 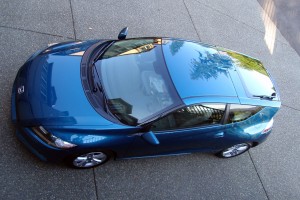 The CR-Z is strictly a two-seater, it is not a 2+2.? There is cargo space behind the seats, which is great for throwing bags and briefcases, but don?t expect to put even an emergency passenger back there.

A big plus for the CR-Z is the pricing, which starts at $19,950, including the destination charge, for the base model with manual transmission.? That makes this the least expensive hybrid in the U.S. market. ?For $1,560 more, the EX model adds some interesting features not usually found on cars at this price point: high-intensity discharge lights, Bluetooth?, aluminum pedals and premium seven speaker audio system with subwoofer.? The only real option to the EX is the $1,800 navigation system with voice recognition.? It?s one of our favorites because of its intuitive controls and it?s one of the few systems that allows the passenger to enter destinations without stopping the car.? Destinations can also be entered by voice commands.

Conspicuously missing from the navigation system is a rear backup camera, which would be invaluable on this car because it has such poor rear visibility. The split rear view with a second glass pane in the end of the hatch emulates the legendary CRX, but it was distracting then and is just as difficult to see out of now.

Overall, we think the Honda CR-Z is a winner?the styling is great, it?s very fun to drive and offers it varying degrees of economy, based on how much fun the driver is having.