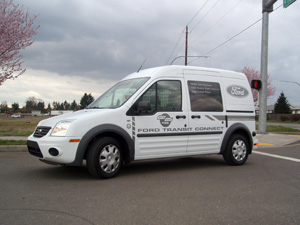 She ? Okay, I was a little embarrassed when He picked me up at the airport in white van emblazoned? with ?Ford Transit Connect? 22/25 mpg?1600 lbs. Payload?135 Cubic Feet Volume?Low Load Floor? and a large Ford logo, not to mention the www.fordvehicles.com/transitconnect web address.

It was as if He had become a Ford dealer while I was in California visiting grandkids for a few days.

He opened the passenger door for me and I sat into a comfortable truck-like cockpit with one of those heavy-duty screens mounted right behind the seats.? I wasn?t sure if the screen was to protect me from flying objects if he slammed on the brakes or to hold something captive back there.? He slid open the curbside door and set my bags into the rear area, came around and we headed toward home advertising ?1600 lbs. Payload?.

He ? When I first saw the Ford Transit Connect a couple of years ago at the Chicago Auto Show, my mind was flooded with the possible applications.? I had been impressed by the Dodge Sprinter van, but it?s sooo big, it was overkill for most businesses.? The Transit, however, had that just right size and should be perfect for millions (or at least hundreds of thousands) of small business that need a reasonably sized vehicle.

When you start thinking of everything it can do from delivering flowers to carrying a plumber and all his equipment the Transit makes great sense.? It gets good fuel economy, has a significant cargo capacity that is easy to access, it?s is agile and much easier to park than a big truck.

She ? I have ridden in a variety of vans over the years, but the Transit was one of the nicer ones.? I like the size — it isn?t necessary to climb up into the cab, the cargo floor is low and easily accesses, yet there is plenty of height to carry tall items.? The six-foot long cargo box could hold bicycles, a motorcycle, dog cages and all sorts of personal cargo, too. 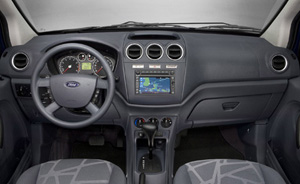 The cockpit is comfortable and the seats feel durable and supportive.? There is plenty of room so the occupants don?t feel cramped, plus there is lots of space to store things between the seats, in the doors and on a large shelf mounted up above the windshield.? There?s even a ?cave? like compartment in the center of the dash for a clip board, notebook or one of those electronic devices the UPS drivers use for signatures.

Ford has worked with cargo management companies like Adrian Steel, Sortimo and Leggett and Platt to develop systems for the Transit.? Our test vehicle was equipped with a Sortimo cargo system filled with faux packages and tools to demonstrate how easily the cargo space is organized.

He — A 2.0-liter Duratec four-cylinder engine producing 136 hp and 128 lb.ft. of torque drives the front wheels through a four-speed automatic transmission.

Delivery vehicles usually are not noted for their high fuel economy numbers, but at 22 mpg city and 25 mpg highway, the Transit has to be one of the best.? We actually averaged 22.3 mpg during our week behind the wheel.? Zero to 60 mph takes 11.1 seconds, and the top speed is limited to 88 mph.

With its low center of gravity, the Transit feels stable on the road and displays little body roll despite its height.

She ? Transit is available in two trim levels XL and XLT and three cargo carrying configurations.?? Pricing starts at $21,880, including destination charge, for the base XT with no windows in the back and go up to $23,350 for the XLT with privacy glass on the rear doors and sliding doors on each side.

Our test vehicle had the Magneti Marelli in-dash computer ($1,395).? Using the wireless keyboard the computer could be used to generate work orders, work on a spreadsheet or all sorts of other computer functions.? An ink jet printer is also available. 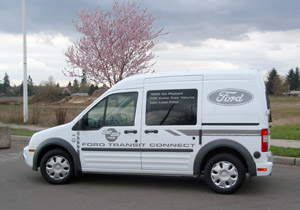 He ? We talked to a couple of families that were looking at the Transit Connect for their active family.? They liked the five-passenger seating and the room for all their sporting equipment.? The XL passenger model starts at $22,235.

Ford is hoping taxi companies will buy the Transit to replace the large Ford Crown Victoria sedan after it is discontinued this year.? A special taxi model will go into production for the 2011 model year designed to meet the extreme demands of the Taxi business.? A special package will allow for conversion to clean-burning compressed natural gas or propane.

I think we will be seeing a lot of Ford Transit Connects on the roads in the future. 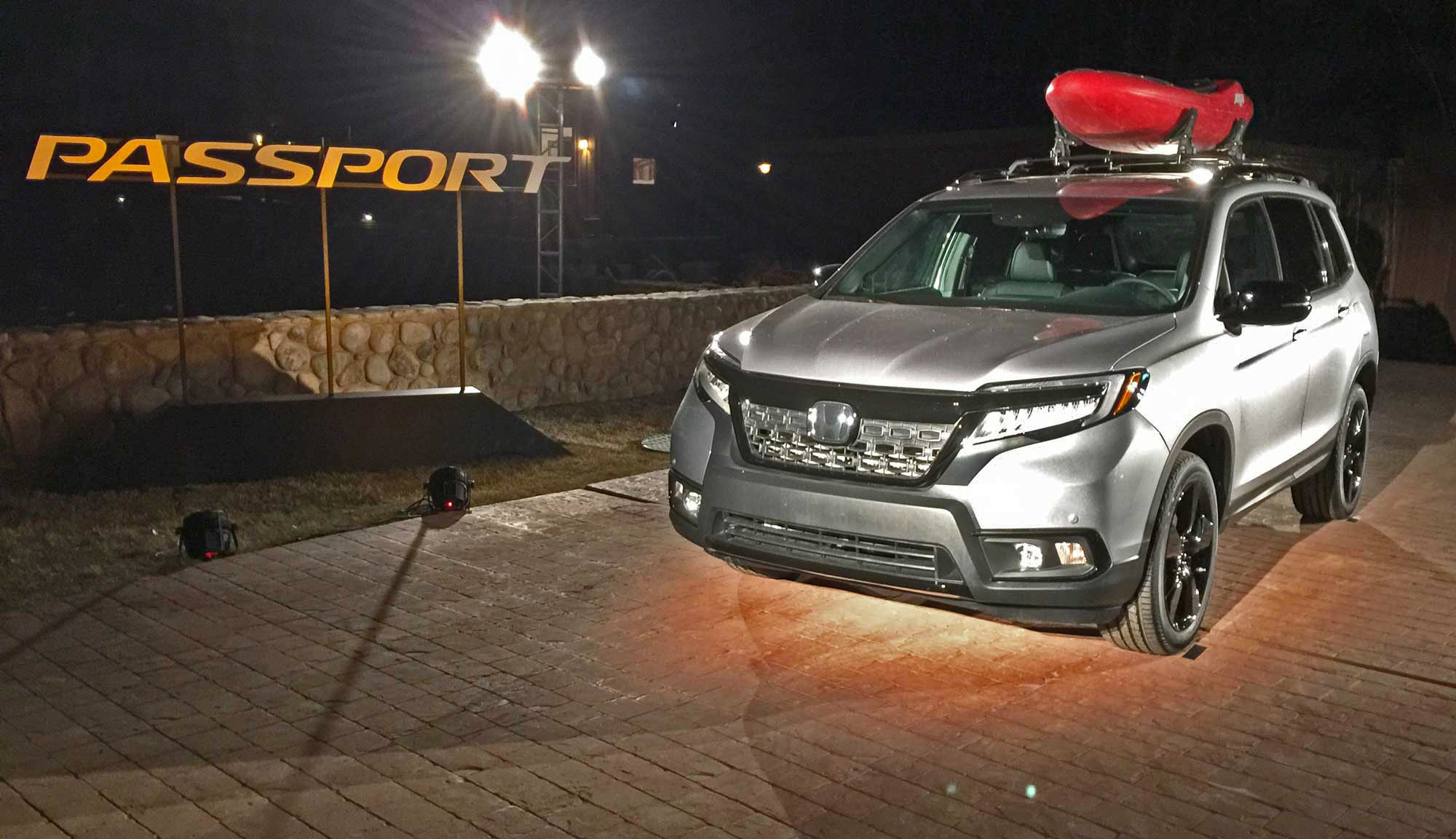