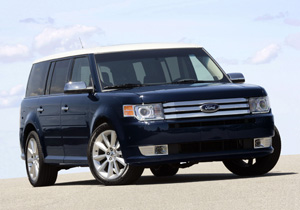 He ? For some reason we had been having trouble getting our hands on a new Ford Flex to drive.? I had spent a little time in the Flex at a couple of the press introductions, but we like to live with a car for a week to get a better impression.? She hadn?t even had a chance to sit in one, so she was anxious too.

To remedy the situation, we arranged to borrow a 2010 Flex EcoBoost for a few days during a recent trip to California and I came away more impressed than ever.

She ? With you always blurting out ?Flex? every time we passed one on the road and after coming back from the two introductions raving about them, I was getting excited about finally getting to spend some Flex time.

Our ride from the San Francisco airport north to where we were staying in Windsor was uneventful, but I appreciated the quiet ride, soft heated seats and the massive cargo area.

He ? At nearly 17 feet long and tipping the scale at more than 4,800 pounds, the Ford Flex is larger and heavier than the Ford Explorer. ?While those numbers may run counter to the industry trend of smaller more efficient vehicles, the Flex carries its size more like a Super Bowl running back than a bulky wagon.

Powered by the new Ford EcoBoost V-6 we have been hearing so much about for the last couple of years, the Flex is no typical family wagon.? Still a comfortable people hauler, the 355-hp, 3.5-liter twin turbo V-6 engine is more the type of car I can sit in at stop lights mentally telling the sporty car next to me, ?I could beat you, if I wanted to.?? ?The engine gets its amazing power by using direct injection and a twin turbo system, which nearly eliminates any of the turbo lag often associated with turbocharged engines.

Combined with a six-speed automatic transmission and standard all-wheel drive, the EcoBoost makes the 0 to 60 mph run in 6.5 seconds.? Certainly not the fastest, but it is darn quick, especially for something this big.? The EcoBoost bonus is the 16 mpg city and 22 mpg highway EPA fuel economy.? We averaged 20.3 mpg during our time in wine country.

She ? The Flex may be large, but the look is very sophisticated with the strong horizontal accent lines on the doors, the broad three bar grille and the stainless accent panel with accent line on the rear door of Limited versions. ?I especially liked the two-tone models with the white top and the massive 20-inch aluminum wheels and tires.

The interior is cavernous, with room for six or seven, depending on the seat configuration.? The cockpit area is attractive with well-defined control groups.

Like most Ford products, the Flex has the Sync connectivity system making it easy for an owner to verbally regulate communications and entertainment features to make a hands-free cell phone call, play a certain song, get directions, hear a weather report, check traffic or even contact 911 in an emergency.

He ? The mountains between the Sonoma and Napa Valleys have some wonderful roads that are squiggly lines on the map.? On the roads, the Flex was right at home at a fast pace thanks to the four-wheel independent suspension and AWD.? I especially appreciated the wheel mounted shifter controls that allow me to shift the six-speed automatic manually to take advantage of engine braking and quicker acceleration out of corners.

The four-wheel disc brakes are strong and are backed up by all the desired safety features including AdvanceTrac stability control and roll over sensor. 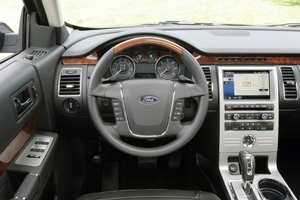 She ? Offered in three trim levels, the Flex pricing ranges from as low as $29,725, including destination charge, for the front-wheel drive SE with the naturally aspired 262-hp, 3.5-liter V-6 engine.? The Limited model, with the EcoBoost engine, AWD and a long list of standard features starts at $44,035 and can go to just over $50,000 when features like DVD entertainment, refrigerator, park assist and a few other goodies are added.

The Flex is available wearing some of Ford?s latest and greatest technology.? The Active Park Assist ($550), for example, is a fantastic system that actually parallel parks the car for you.? You simply shift gears, stepping on the gas and brake as necessary.? Other interesting features include Sirius TravelLink system that works with voice navigation, reverse camera and built in refrigerator.? The refrigerator seems a little pricy to me at $795, considering it only holds seven 12-oz. cans.

One other innovative system, MyKey? is a great safety features for parents with teen drivers.? The special key can be programmed through the message center to add features like a persistent Belt-Minder? chime, top speed limited to 80 mph, lock the traction control on, limits audio volume to 44 percent of maximum, and chimes an alert when speeds reach 45, 55 or 65 mph.

He ? The Ford Flex is a big winner in my book.? With the EcoBoost engine performance and fuel economy and the good handling characteristics Flex is the kind of crossover I?d like in our garage. 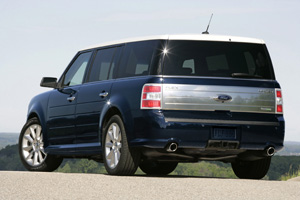 She ? Sure the Flex is has all those features you like He, but it appeals to me more for the sophisticated styling, comfortable ride and innovative features.? I guess that gives the Flex two thumbs up. 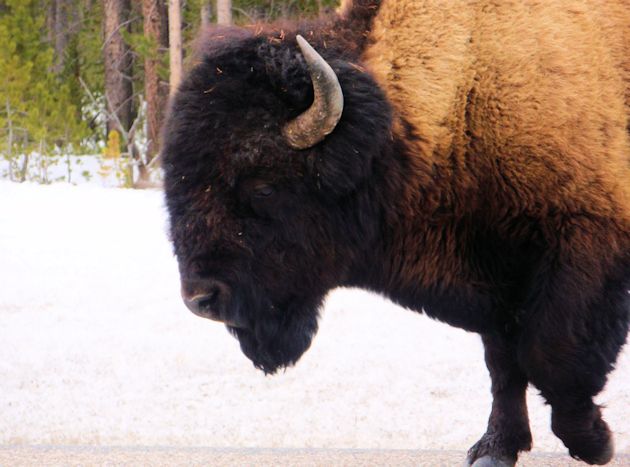 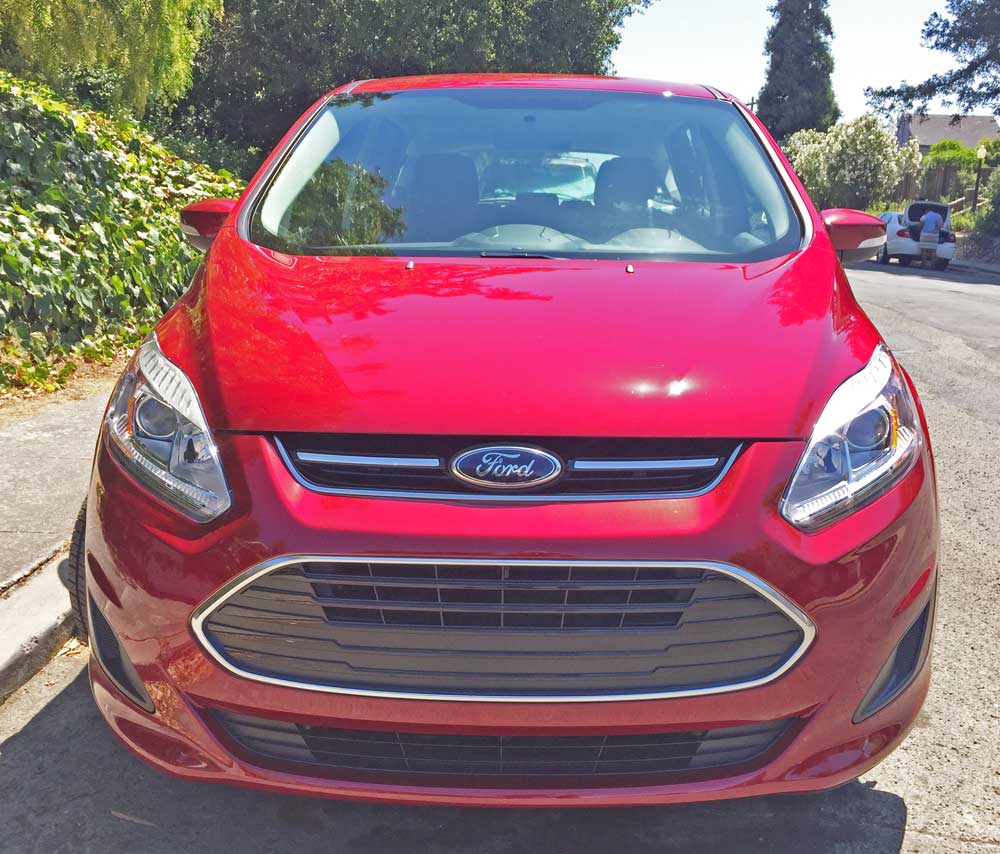