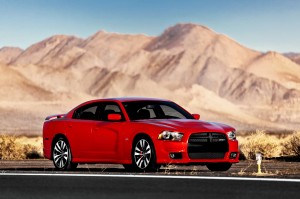 Look up the definition of a charger and you get everything from a football player to a decorative plate for a fancy table setting to a full-size Dodge sedan.

The Dodge Charger itself even comes in nine variations including SE, SXT, SXT Plus, R/T, R/T Plus, R/T Road & Track, R/T Max, SRT8? and SRT8 Super Bee.? Each model provides a different experience to fit nearly every budget and driving style.? The diverse lineup gets an exciting drivetrain offering too, with a new state of the art V-6, a Hemi V-8, and the SRT8 Hemi.

The V-8 engine (and the base SE V-6) is hooked up with a five-speed automatic transmission with manual shifting Auto Stick shift linkage, but the STX versions with the V-6 engine get the efficient new ZF brand eight-speed automatic.

All models are rear-wheel drive, but certain variations are offered with optional all-wheel drive.? The full time AWD system seamlessly transitions between rear and all-wheel drive with no intervention when tire slippage is detected.

Since it was redesigned as one of the first offerings out of the Chrysler post-bankruptcy renaissance, the Charger has taken on a new styling, which is best described as revolutionary evolutionary.? It?s obviously from the same genes and has the same basic look as the previous generation, but with flare that would rival one of the best ?before and after? makeovers they often show on the daytime talk TV programs.

The crosshair grill is more refined and better integrated, and the headlights are large and purposeful.? The sides have a new sculpting that gives the impression of movement even while it?s standing still. The rear end is as distinctive as the one on the original 1960s muscle car only it?s illuminated with a 164-LED taillight treatment spanning the full width of the rear end. 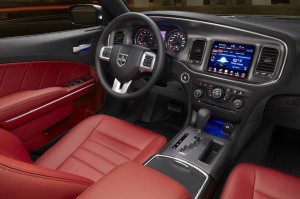 ?? The Charger interior is the best execution the brand has ever put forward, with simple business-like controls, a clear easy to read instrument cluster and clean styling with a generous allotment of storage compartments in the console and doors.?? At the top of the center stack is a ?must have? 8.4-inch touch screen display.? This system is the fastest touch screen we?ve ever used and it?s loaded with useful and entertaining features.? Touch one of the large icon displays to change audio, navigation or phone functions and it springs to life quicker than a fly about to be swatted. ??The system makes sense; there is no searching for the right button, or menu choice.

We recently had a chance to sample two of the Charger models, which represented both ends of the lineup, the SE and the SRT8?.

With a base price of $26,420, including the destination charge, the SE represents the model?s entry-level pricing for a basic full-size sedan.? Add about $2,300 in options and suddenly the Dodge has an eight-speed automatic transmission with electronic shifting, sports appearance group, Uconnect Touch communication system and a few other attractive upgrades.? This is no stripper; it?s a very nicely equipped vehicle.

The Charger is powered by Chrysler?s most advanced six-cylinder engine ever, the Pentastar.? The 290-hp, 3.6-liter V-6 has a 0 to 60 mph acceleration time of only 6.7 seconds and an EPA rating of 18 mpg city and 27 mpg highway.? The engine has been on the Ward?s Top 10 Engine list for the last two years. 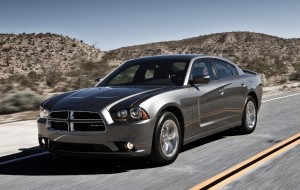 The Charger feels big, but it has a solid agile manner and spirited performance making it one of the most fun to drive V-6 powered cars in this category.? The most noticeable change has been significant enhancements to the car in general has been the significant improvements in build and material quality. ?We also think the Uconnect Touch screen is one of the best navigation, entertainment and communications systems in the industry.

Negatives are limited to slightly tight headroom in the rear seat and a love or hate styling.

The pinnacle model Dodge Charger is the rear-wheel drive SRT8? powered by the legendary Hemi V-8. ?With a 470-hp Hemi engine under the hood, Brembo brakes and fat 20-inch performance tires at the corners plus an adaptive suspension system making this is a state of the art performance car.

Performance specs compare closely with some of the most expensive cars in the world, too, with numbers like a 4.3-second 0 to 60 mph acceleration time and a 175 mph top speed.? The EPA rates SRT8 fuel economy at 14 mpg city and 23 mpg highway.

The new Hemi engine is a 6.4-liter V-8 delivering 45 more horses and 50-lb.ft. of torque, along with a 21-percent increase in fuel economy, thanks to a Fuel Saver Technology that shuts down four of the cylinders when the car is cruising. The system helps but not quite enough to avoid a $1,000 Gas Guzzler Tax.

The SRT8 has a heavy-duty five-speed transmission, which allows the driver to select a ?Normal? or a ?Sport? mode that produces more aggressive shifts.? The transmission may also be shifted manually using a convenient sideways movement on the Auto Stick shift linkage or by using the steering wheel-mounted paddle shifters. 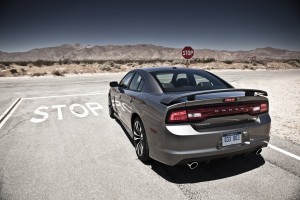 The SRT8 also gets special sport seats that give added support to help keep the driver and front seat passenger in place during aggressive driving.? The front seats, which are both heated and ventilated, are covered in Nappa leather with an Axis perforated suede insert fabric.

To maximize the SRT driving experience, everyone who purchases the Charger SRT8 receives a one day of professional driving instruction from the Richard Petty Driving Experience.

For $47,620, including the destination charge, a buyer gets one of the best performance values available today.? The SRT comes very well equipped and has only a few available options, which include a sunroof, adaptive cruise control and Driver Confidence group.