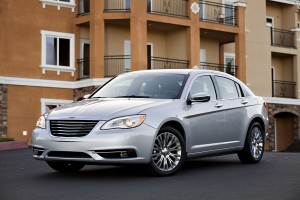 We were never big fans of the third generation Sebring when it was introduced in 2007.? The looks didn?t excite us and it was just OK to drive. The car seemed to lack imagination and personality.? It seemed like something designed merely to fill a gap or to populate rental car fleets.

When the Sebring replacement, the Chrysler 200, appeared on our test car schedule, we knew it was a car that we needed to drive, but weren?t excited about its arrival. ?A week later, we were singing a different tune, and with Barbara in the car it was probably a Frank Sinatra song –Siriusly Sinatra is her favorite Sirius Satellite station and our test car had it.

Chrysler, and its new owner, Fiat, have had their hands full the last couple of years with more pressing problems than the redesign of the Sebring, but it?s a product that badly needed upgrading and refinement.? Based on how busy they were going through the financial crisis, and reinventing the company, they did a remarkable job on the 200.

The changes include some new sheet metal, a new engine, a new interior and some suspension refinements.? In the end, the 200 exterior looks better, but still lacks ?wow? factor.? We did like the tasteful use of LED lighting used both in the front and rear lighting pods.

The interior is a different story. ?Gone is the plastic d?cor, replaced by an all-new instrument panel, steering wheel and upgraded seats.? Many hard plastic surfaces were replaced by ?soft touch? surfaces that convey a higher quality look and feel. Throughout the interior there are dozens of little touches that show attention to detail and quality.

Those extra touches are further enhanced with extras like ambient lighting and the new steering wheel with intuitive controls to operate the cruise control, audio system and hands free phone.?? There?s even something of a ?geek? factor with the optional media center that includes Sirius Satellite radio, a 30 gigabyte hard drive, iPod? connectivity and a navigation system with Travel Link. 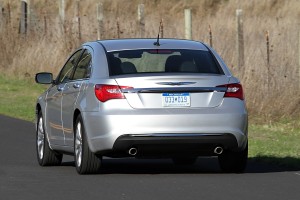 Speaking of sounds, we certainly didn?t expect this car to have an engine with a powerful exhaust growl, but were pleasantly surprised by how great it sounded.? With all the things on Chrysler?s ?to Do? list, the new engine was near the top, and the result is impressive.?? Our test car had the all-new 3.6-liter Pentastar V-6 engine option.? Delivering 283-hp, the 3.6-liter V-6 engine offers best-in-class horsepower, which produces an amazing 6.4 second 0 to 60 mph times.? The EPA rates the V-6 at 19 mpg city and 29 mpg highway.

The standard 200 engine is Chrysler?s proven 173-hp, 2.4-liter in-line four-cylinder that gets a 20/31 mpg EPA rating.? Both engines drive the front wheel through a six-speed automatic transmission.? A high value version is also offered with the same gas four-cylinder engine and a four-speed automatic.

The 200 is not the kind of car we want for racing through winding mountain roads but the major suspension upgrade displayed noticeable improvements over the Sebring in both ride quality and handling. ?We were impressed by the smooth ride quality and suspension transitions.? It is a very nice car to drive.? The car structure is quite rigid and we were pleasantly surprised by the very quiet cabin.

The Chrysler 200 doesn?t have an all new sexy design nor is it offering breakthrough technology, fuel economy or performance, but it shows that the company is on track for one of the greatest automotive turnarounds of all time.? We?re looking forward to seeing what else their smart, innovative leadership can do.